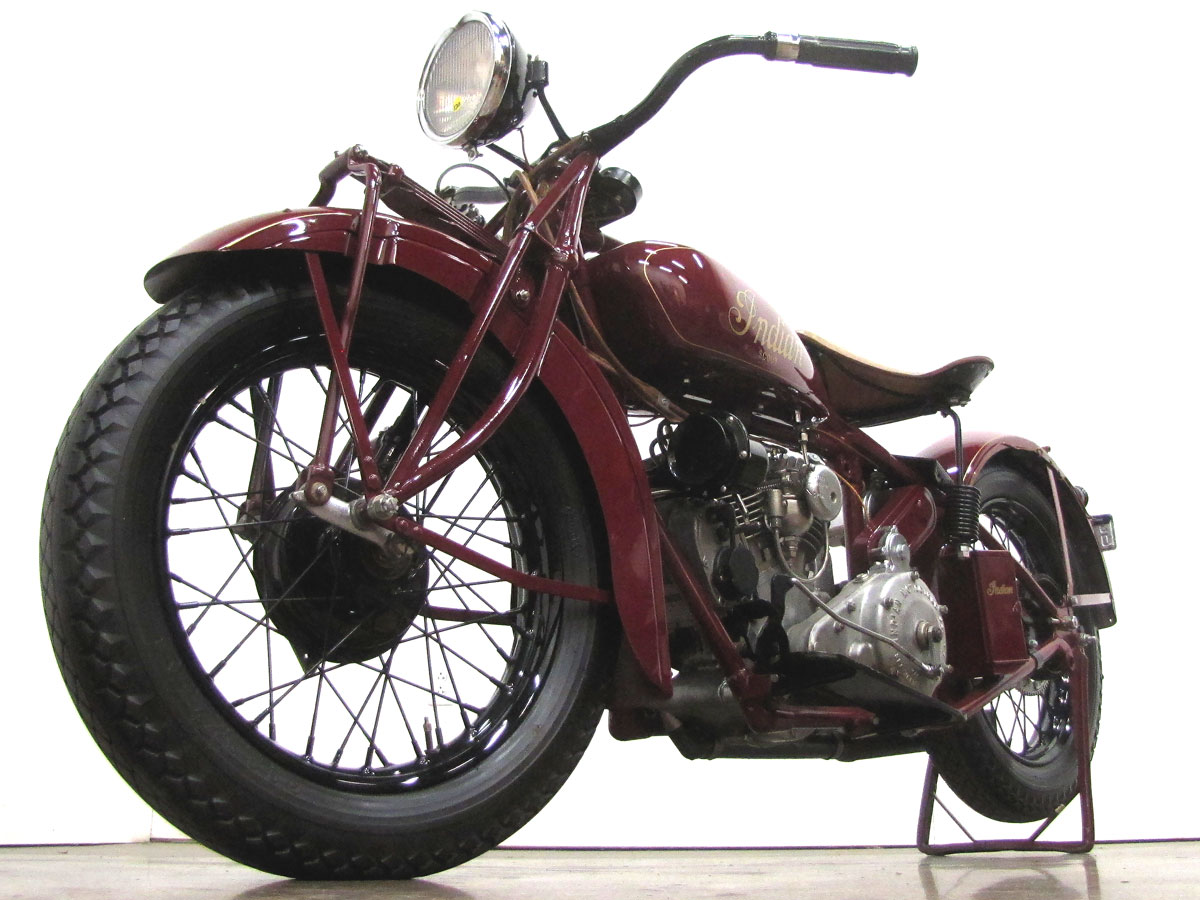 In the early 1920’s Excelsior’s heavy weight V-twin race bikes (61 cubic inch and 74 cubic inch) were being out-performed by Harley-Davidson and Indian racing bikes. This was true in flat-track, dirt-track and hill climb events. So Excelsior decided to change the playing field in 1925 by introducing the Super-X, a middleweight 45 cubic inch V-twin easily converted for racing. The Super-X immediately out-performed the 61 cu in bikes on the racing circuit, so in 1926 AMA sanctioned a 45 cubic inch racing class. Both Harley-Davidson and Indian recognized that they needed to produce a 45 road model to compete. In 1929 Harley-Davidson came out with a completely new design middleweight V-twin, the Model D series. Indian took a different approach, simply increasing the capacity of their 37 cubic inch Scout; the bore went from 2 3/4” to 3 1/16” and the stroke from 2 7/8” to 3 1/2” giving 45.44 cubic inches.  Indian introduced its ‘Forty-Five’ road model late in 1927, an upgrade of its original Scout.

The Scout 45 had surprising power, speed and agility and its top speed approached 80 mph. It became popular with Police Departments who already loved the earlier Scout yet satisfied sport riders. In March 1928 Indian again reworked the Scout releasing the famous 101 Scout, the crowning achievement of Indian engineer Charles Franklin. The 101 Scout had a 2 5/8” longer wheelbase, its engine was shifted forward almost three inches and the saddle height was reduced nearly two inches. The 101 Scout was then available with either a 37 cubic inch or 45 cubic inch motor and now had a front brake. The 101 Scout was at the peak of performance with power, light weight, low seating and ease of handling.  But the 101 Scout was short-lived. Under Indian’s Dupont ownership its production ended in 1931; the 101 Scout cost more to produce than the Chief coupled with the financial impact of the 1928 stock market crash which had devastated America.

This 1930 Indian 101 Scout is graciously on loan from Joe Wessbecker, also the owner of last week’s Featured Motorcycle, the 1926 Scout.  In addition to this 101 Scout, the museum has several Indian Scouts ranging in years through to the 1940’s flat-track Sport Scouts and beyond.  There is also a rare OHV 45 Scout hill climber and a 1931 101 Scout motordrome bike once ridden by the famous George O. Thibeault, a.k.a. Lucky Thibeault, ‘The Golden Age Kid,’ at the Brockton Fair, Brockton, Massachusetts.