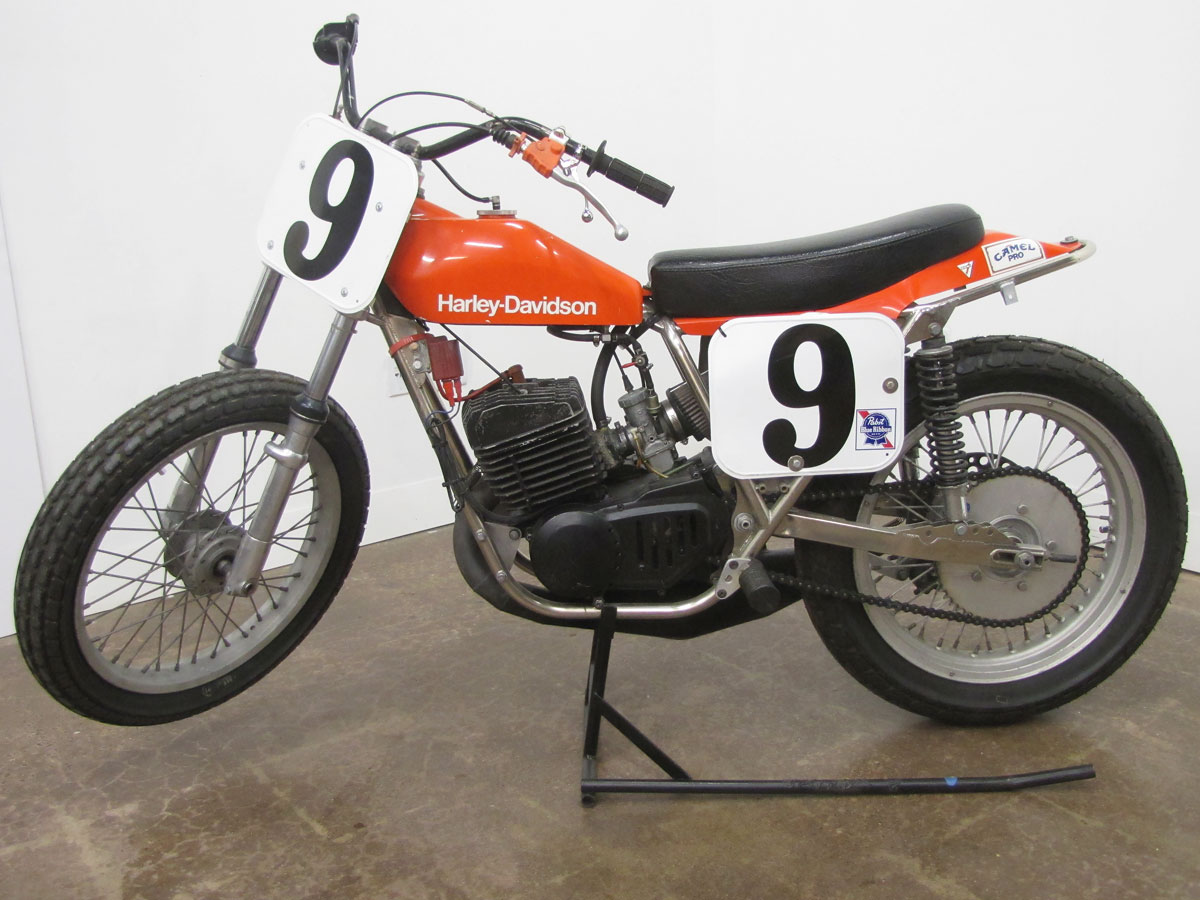 Ridden by hundreds of pros and novices, by the early 1970’s, The Harley-Davidson Sprint CR250 had served as a road racer and flat track racer for over a decade. Designed by Aermacchi in Italy, with Harley’s purchase of the company in 1960 the fine race bike came along in the deal. With a special rigid, then later a suspended frame, it won hundreds of races.

But when the snazzy bright orange MX250 two-stroke motocross bike came into Harley’s line-up in 1978, tuners like Bill Werner saw an engine with greater possibilities as a dirt track racer power-plant. This port inducted two-stroke engine offered a lot more power than the old CR250 four-stroke, and saved a few pounds as well.

Built in 1978, legend Jay Springsteen rode this factory, Bill Werner prepared, Champion-framed MX250 to two of his 43 wins, back-to-back at the Houston Astrodome. In fact Springsteen won his first AMA National short track at Houston on this bike. Fellow Harley Team member Scott Parker also used the machine to score his first short track GNC win at Santa Fe in 1980. Parker would go on to win 94 GNC races and nine championships. Springsteen always did well at Houston and in 1981 and 1982, won the opening short track rounds. The bike, and quite a few others like it, were raced about seven seasons until 1984. That was when the AMA changed the rules from using 250cc powered machines to 500cc four-strokes.

Jay Springsteen kept the MX250 dirt tracker stored in his mom’s basement for nearly 30 years until he loaned it to racer/historian/restorer Don Miller. The National Motorcycle Museum had contacted Don about bikes for the then upcoming 2013 Dirt Track HEROES exhibition. Miller managed to borrow the bike from Springsteen and got it back together and into displayable condition for the exhibition, and Jay and other famous riders attended the opening ceremonies. Miller offered, “It was amazingly in good shape. I got it home and went to work, going over the motor, cleaning, lubing and reassembling it to just how it was. All the missing parts came from either Jay or his tuner, Bill Werner’s stash. I paid careful attention so as to not disturb anything that could change its authenticity. It was just clean it up and put it back as it was.”

Jay’s Champion-framed MX250 has been on display at the National Motorcycle Museum in Anamosa, Iowa since the Dirt Track HEROES exhibition closed. You can view it plus Indian, BSA and other Harley-Davidson dirt trackers, several Harley Sprint and Aermacchi race and street bikes. Our thanks to Jay Springsteen for the extended loan of his storied Harley-Davidson MX250 flat track racer.