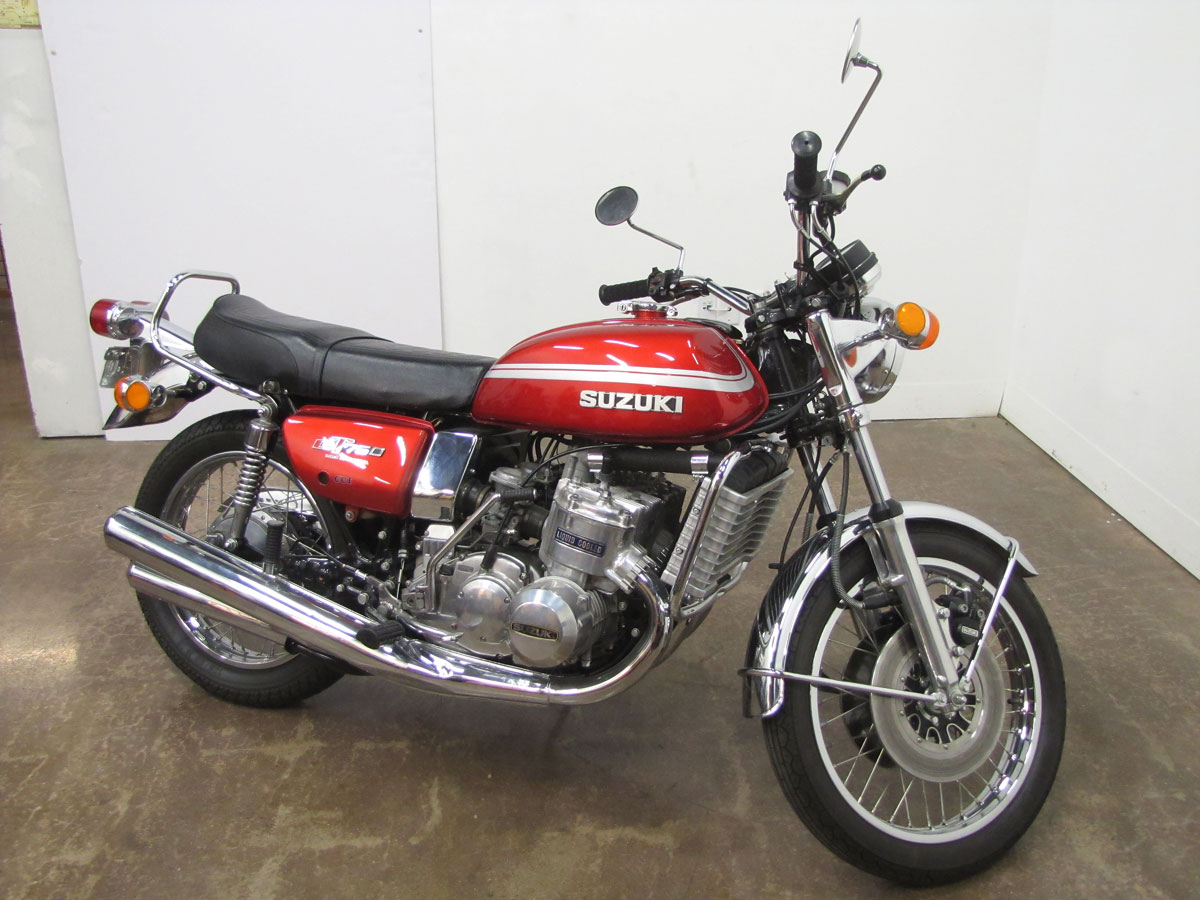 Suzuki introduced the three cylinder two-stroke liquid cooled GT750 in 1971 over two years after the Honda CB750 hit the streets. It was the first serial-produced water-cooled bike from Japan.

The 1969 to 1972 era brought some of the biggest advances in high performance motorcycles seen in motorcycling’s 80 year history. The 750cc displacement became the standard and Japanese and British makers rolled out three and four cylinder “superbikes,” with the GT750 late to the competition. The GT750 was manufactured through 1977 replaced by the four-stroke GS series which arrived late in 1976 first as a 750 four cylinder.

With a rubber mounted water-cooled engine, a plush seat and comfortable suspension, the GT750 was a comfortable fairly fast bike. But in 1971, numbers counted and the Kawasaki H1 and Honda CB750 were one and two in quarter mile times for Japanese makes, with the Norton Commando and Triumph and BSA triples strong competition. The Harley-Davidson Sportster was still competitive as well. In 1972 Kawasaki would release the 750cc triple H2 and it became the quarter mile king. So the GT750 worked well, but with the spotlight on horsepower was relatively docile. It was never part of the performance wars, is remembered for its four leading shoe drum front brake. Yamaha had little to offer in the early 1970’s, but in 1973 Kawasaki would move to the four stroke Z1. In 1976 Suzuki offered it’s first four-strokes in the GS series ultimately 1000, 750, 550 fours, and 500, 450 and 400 twins.

In general two-strokes offer simpler, lighter engine construction, more horsepower per cubic inch and to a degree, lower maintenance. But of course in the 1970’s, emissions were of concern and two-strokes typically lack efficiency and are not so clean burning. Kawasaki had also gone down the path of a high performance three cylinder two-stroke, though air-cooled but was the first two-stroke company to “defect” with the 903cc DOHC Z1 in 1973. Hondas were always four-strokes until the CR250M Elsinore motocrosser arrived in 1973.

Today all “Water Buffaloes” are prized collectible machines, both here and in Europe where they are nick-named “Kettles.” This immaculate GT750 was donated to the National Motorcycle Museum by Mark Orgel some years back. A later dual disk model, it is displayed beside a GT550 and a GT380 plus other great 1970’s Japanese machines.