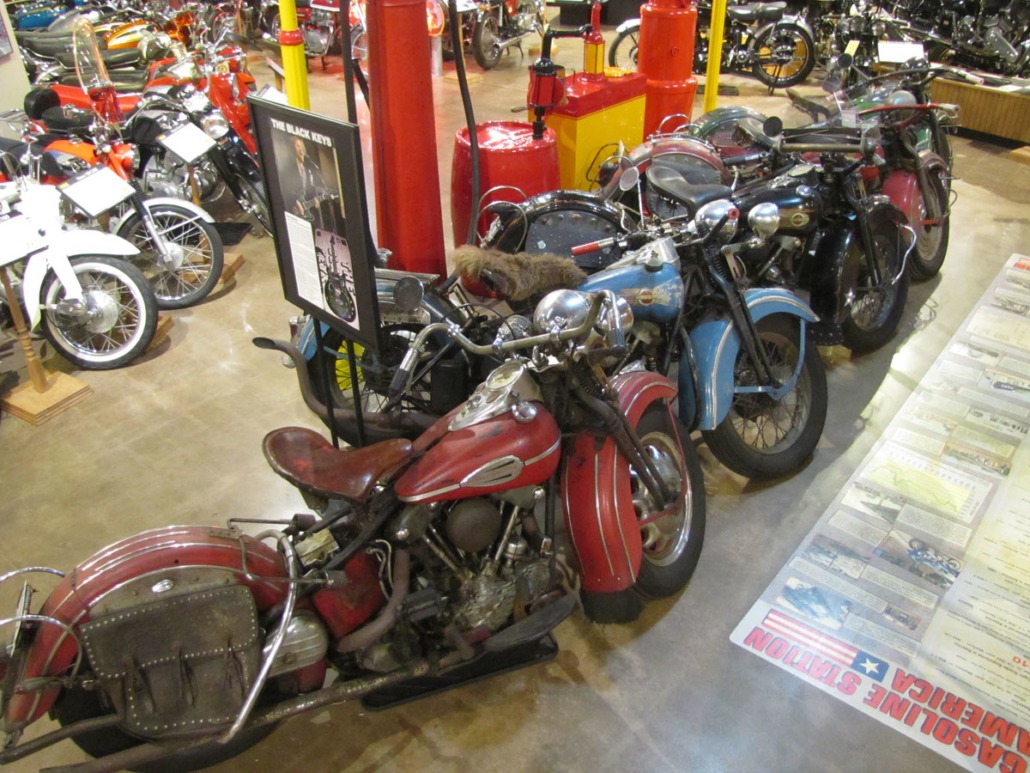 Buying accessories to make your motorcycle more functional or stylish has been around since the earliest days of riding. Lights, horns, crash bars and racks are useful, but also add uniqueness. But at some point beginning in the 1930’s outright (non-functional) decoration became popular.

In these five Harley-Davidson ELs graciously on loan to the National Motorcycle Museum by musician and producer Dan Auerbach, we see some great accessories and decoration. As far as we can tell they have been part of each bike for decades, were not added in the past few years.

Interestingly, there was a time when collectors stripped these pieces off and scrapped them working to get their bikes back to factory stock for AMCA judging; a bit of a purest movement. Yet some bikes, through neglect or a passion for “the way it’s always been” have been left intact.  For about the past ten years an old Harley or Indian with all its “period accessories” still in place is highly desirable. We are back to appreciating a bike’s personal history, the character a previous owner gave it.

Taking this group from left to right we have a 1940 EL, a 1939 EL, a 1937 EL, a 1940 EL and a 1941 EL, all pre-World War II 61 cubic inch Harley-Davidsons as the EL designation relates. Though the paint is straight forward, and original or very old on these bikes, we see great fender guards, crash bars, styled exhausts, colored grips, shift knobs and kicker pedals, an amber light on an air cleaner cover, spotlights, license plate trims, bike club badges, chevrons, great saddlebags with conchos and contrasting piping, even wheel covers, fur seat covers and little chrome space ships!

Dan Auerbach is a singer, songwriter and musician originally from Akron, Ohio. He’s best known for recording as The Black Keys with high school friend and drummer Patrick Carney. Together they have produced over ten albums, and many singles.  And as you can see with the bikes from Dan’s collection, original and a little scruffy is how he likes his motorcycles; period accessories, very untouched and original.

When you visit the National Motorcycle Museum you can see stock, competition and customized Harley-Davidsons and hundreds of other motorcycles. You’ll also find motorcycle accessories like these on display, some in their original boxes.