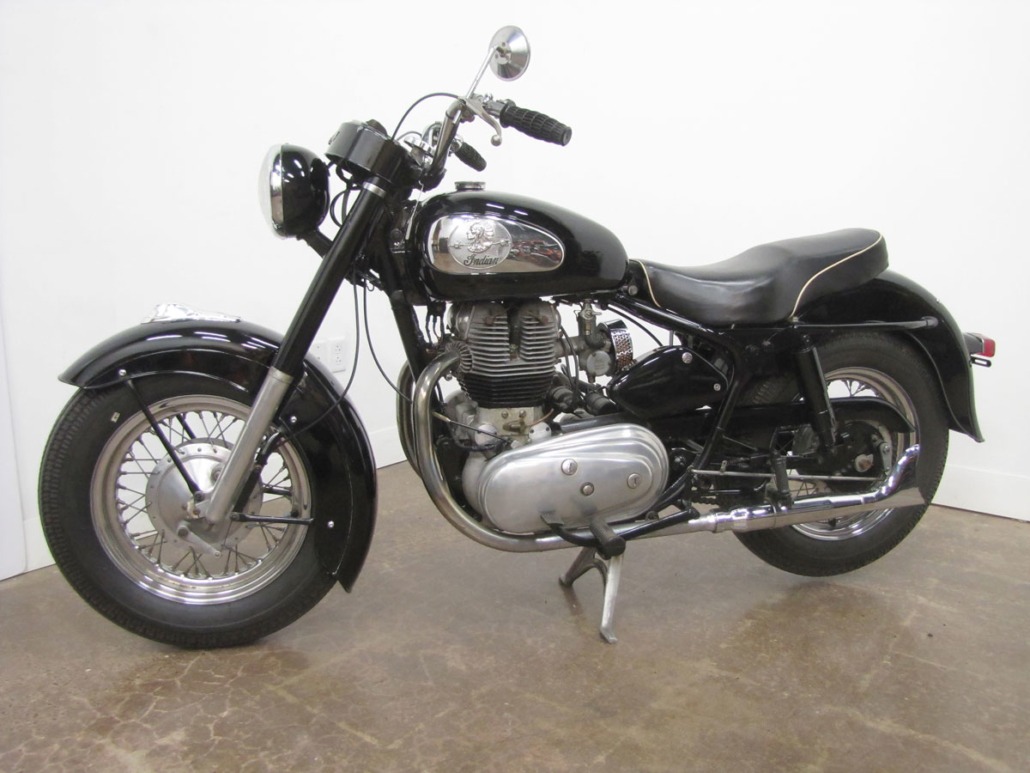 In the post-World War II era business was difficult for Indian Motorcycle Company. Ownership changes resulted in a British motorcycle restyled and rebadged, and sold as an Indian.

Manufactured since about 1901, in 1953 Indian manufacture ceased, but not before some very strange collaborations and financial dealings began. With expectations of giving it a boost, a successful motorcycle manufacturer in England, J. Brockhouse & Company invested $1,500,000 in Indian Motorcycle Company, taking controlling interest.

But with new ownership the manufacture of the traditional Chiefs never resumed. Instead certain Brockhouse manufactured-in-England machines, like the Enfield were “rebadged” as Indians, given traditional American motorcycle features like 16” wheels, the front fender light, dark red paint, one inch handlebars and brought to America. Here they were met with some disgust by traditionalists and failed to sell very well at all. Brockhouse, by getting its foot into American Indian dealerships also was selling other English motorcycles through the Indian dealership network, including AJS, Matchless, Norton and Vincent.

But this new Chief had some interesting engine design features. Heads and cylinders were separate units, supposedly to aid cooling. It was a dry sump design, but instead of a remote oil tank, a sump in the engine was the oil reservoir and there were two oil pumps. A dipstick for oil level was provided and an easy to change oil filter was provided as well; a rare feature at this time. The power-plant was semi-unit with a duplex primary chain with a slipper tensioner. The two camshafts were chain driven.

On the competition front, the American riders who had campaigned Indian Scouts on the dirt tracks were given British bikes, including Manx Nortons, to race. But in a strange “branding” effort, these riders wore race jerseys with the Indian logo.

This was an ill-fated experiment to continue the Indian brand and it ended in 1961. Some references state that in the seven years of Brockhouse ownership only about 7,000 Indian-branded motorcycles were sold. This 1959 Chief is one of the last of this model manufactured and is from the Jill & John Parham Collection.

The complete history of the Indian Motorcycle is a feature exhibition at the National Motorcycle Museum you can see when you visit. In addition to the Brockhouse era machines, there are Indians, and Indian prototypes, from the era when the brand was the subject of several failed reincarnations. And of course the latest from Indian, the FTR1200S is the Museum’s 2019 Fund Raiser Bike, on display in the Museum lobby and at many events the National Motorcycle Museum attends.