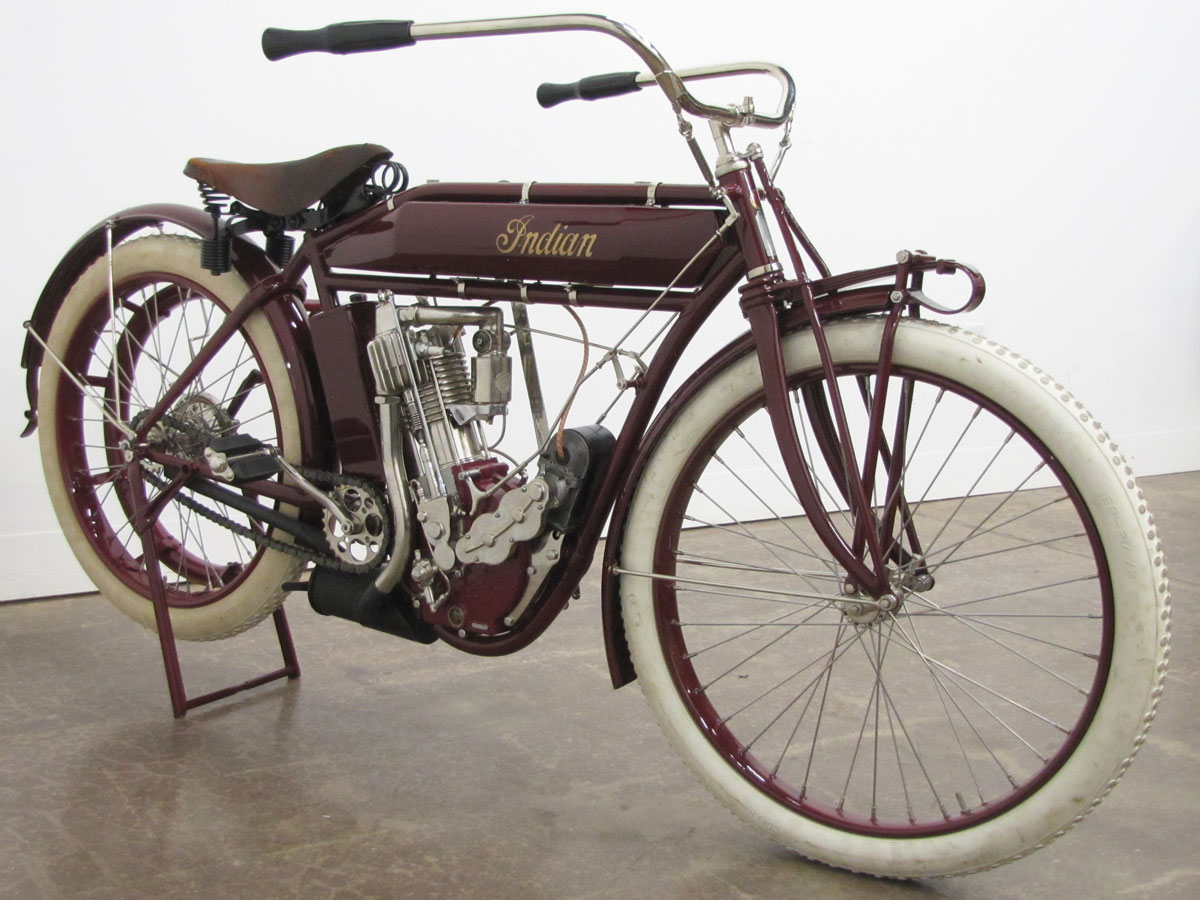 From the beginning of production in 1902 Indian built all its motorcycles with chain final drive. But for 1911, to be more price competitive, the company experimented with selling cheaper-to-produce belt drive on its 4 horsepower single. Meanwhile, from the very beginning Harley-Davidson, and most other makers in that first decade, used belt drive.

Needing a couple of pulleys, a belt and tensioner, no sprockets, clutch or chain, the belt drive system was cheaper to produce than chain drive. Belt drive was all Harley-Davidson used until 1912 when it finally switched to chain drive. Belt drive Indians are, therefore quite rare being made only two years first in both a 2 3/4 horsepower and 4 horsepower models, then only 4 horsepower machines. Sophistication also shows in Indian’s use of shafts, universal joints and bell-cranks for ignition and carburetion controls as opposed to cables on most other brands. Colors for 1912 were the standard Indian red and optional Royal Blue.

The clutch for the belt drive is hand operated, using the large lever to the left of the fuel tank. The final tension was designed to lock in, but the rider could dial in a bit of slippage for starts, and if an extreme hill was encountered. Adjusting an idler compensated as the belt stretched. Of course the belt drive system suffered in wet conditions, and in Indian engineers’ minds was unacceptable for the power of their v-twin machines then of 61 cubic inch capacity. Though modern Indians again employ Gilmer-type belt final drive, Indian stopped using belts for the 1913 model year.

Indian also offered two-speed transmissions in most models in 1912, and announced they were using magneto ignition exclusively. After winning first, second and third places in the very demanding Isle of Man Tourist Trophy race in 1911, Indian made “replicas” of the winning machine for 1912 dubbed Tourist Trophy models.

When you visit the National Motorcycle Museum you can learn about Indian’s interesting history, view Indian advertising art and signage and great street and racing Indians. There are even rare board track machines on display.