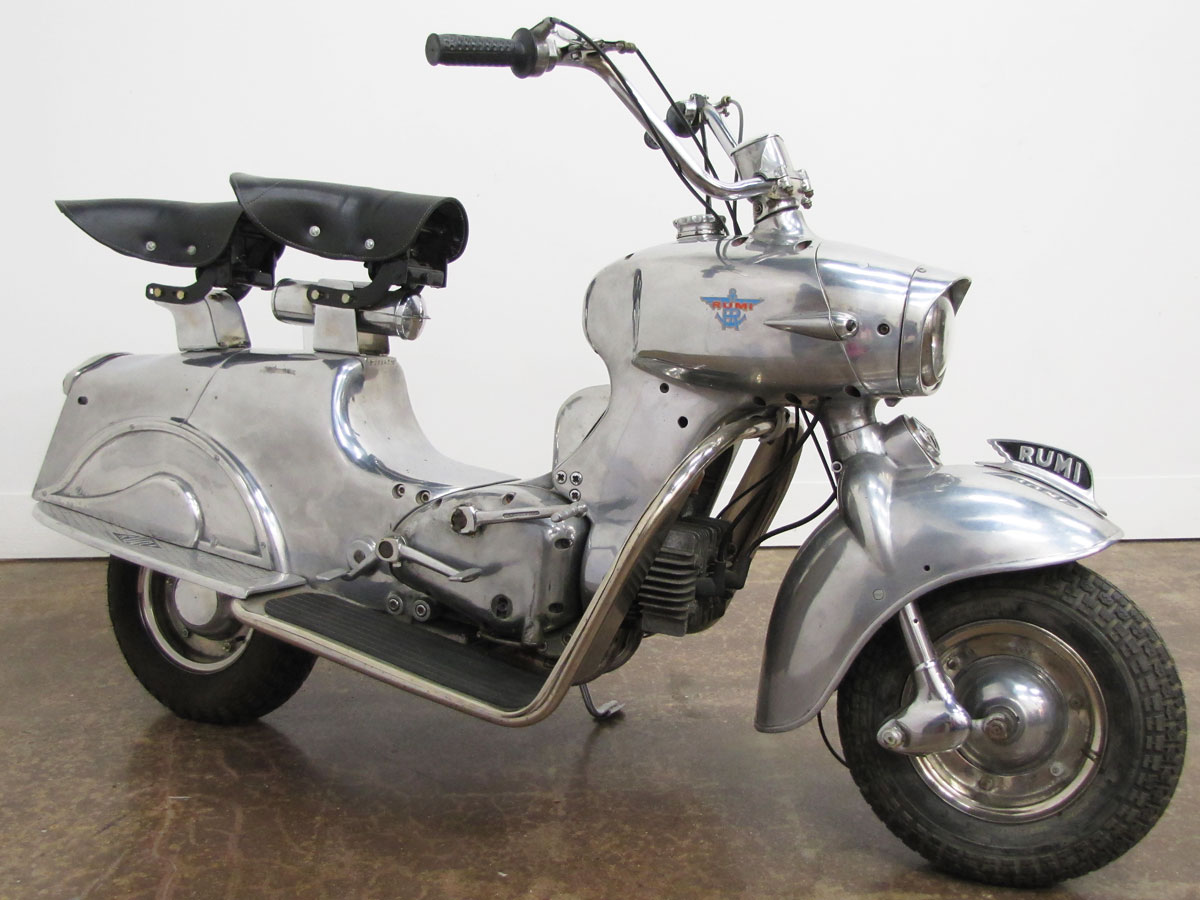 The Italian company, Rumi, made v-twin and parallel twin street and racing motorcycles in the post-World War II era through the early 1960’s. At their height these include the Salmaggi-designed 248cc parallel twin cylinder DOHC racing machines. Rumi’s heyday was in the mid-1950’s with their advanced scooter designs.

Most European scooters are made of steel stampings which often act as a frame, the structural members. With Rumi’s industrial expertise in aluminum casting, the parallel twin engine is a stressed member of a cast aluminum monocoque body made in three main pieces. Donnino Rumi, son of founder Gabrielle, was a classically trained artist and brought his talents to scooter engineering, design and styling. Though Rumis were painted, this machine was stripped and polished at some point in its life and proudly displays its unusual cast aluminum construction.

Rumi Foundries began production in 1906. Their offerings were wide ranging including parts for textile manufacturing machinery and later some of the best complete machines. During World War II production included parts for submarines, some cast in bronze and also complete two man subs. Sensing the need for cheap transportation in post-War Italy, a branch of Rumi foundries was active in motorcycle and scooter production between 1950 and 1962. Wishing to prove durability and performance, the factory participated in sprint and long distance racing competition. They were even successful many times in the Moto Giro Italia and the 24 hour Bol d’Or in France which had a highly competitive class for scooters. Though similar in basic design to the featured scooter, the special Bol d’Or model used larger wheels and was raced-tuned to reach 80mph!

The Rumi is one of about 15 scooters and power-cycles at the Museum. The stylish and early Salsbury, the Iowa-made Doodle Bug, a Harley-Davidson Topper, a folding Argyle plus Lambrettas, Cushmans, the Mustang and somewhat rare Moto-Scoot solo, even Whizzers are all waiting for your visit. Walking through this area in the Museum is a great study in two-wheeled transportation design.