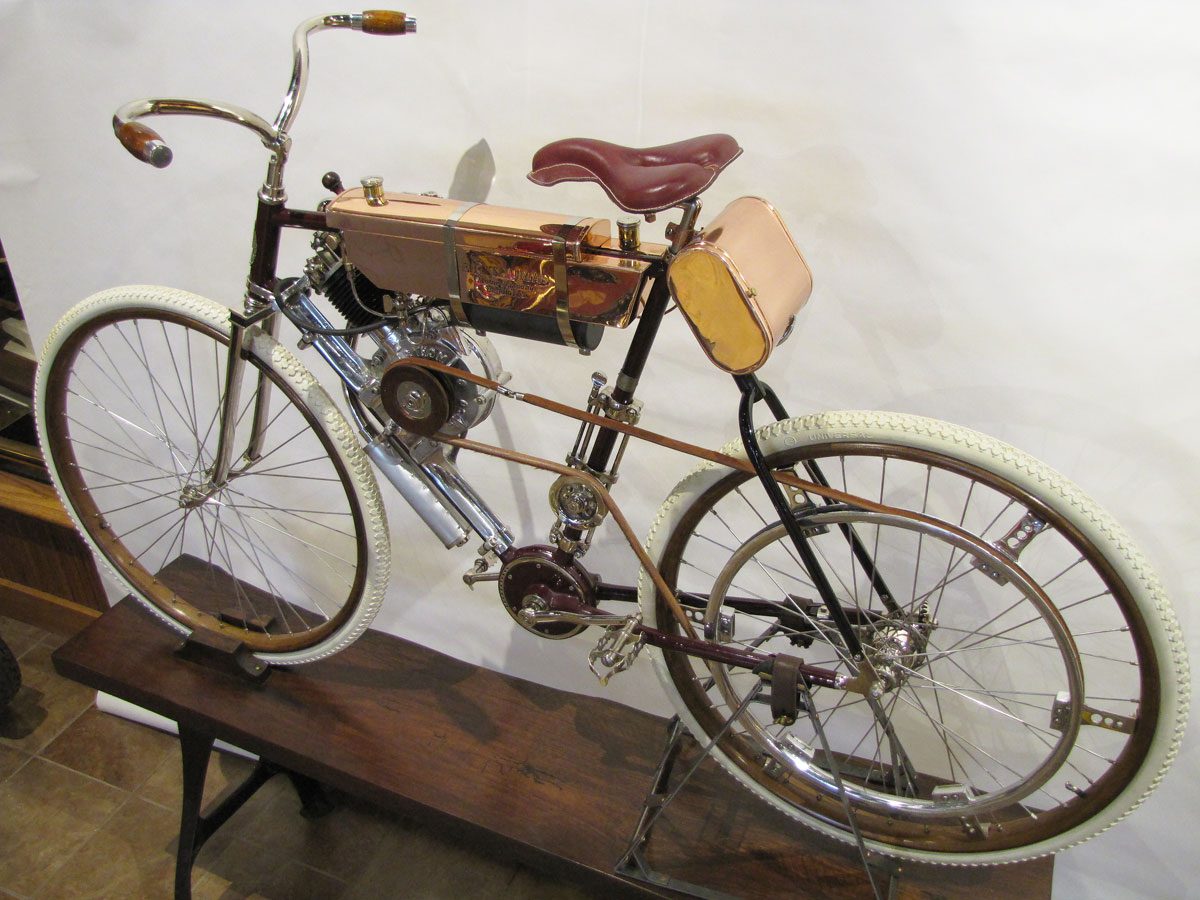 The Thomas Auto-Bi used a relatively large for the time, 11 cubic inch, or about 180cc, engine that made about 2.5 horsepower. The design used an atmospheric intake valve, a rather large, complex carburetor and cam operated exhaust valve. Drive was by belt and the Auto-Bi could reach about 35 miles per hour. This Thomas is built around a Pierce bicycle, one of the finest bicycles in the era with shaft drive, front and rear suspension.

The late 1890’s were interesting times for power generation. The steam engine was very well developed by then as were electric motors. The internal combustion engine not so developed as witnessed by the odd fuel vaporizing system used on the four cylinder engine on the Wright brother’s first successful aircraft. Carburetion was one engineering aspect of early internal combustion engines yet to be worked out. But the French, including the De Dion Bouton company were offering pretty dependable small single cylinder engines. After visiting the factory in France and then selling these engines to motorize bicycles, E. R. Thomas of Buffalo, New York, then began manufacturing this engine under license. Soon Thomas invested about $150,000, hired pattern makers and machinists and created his own engine design. Late in 1901 Thomas made them available in his Auto-Bi, a complete two-wheeled machine, and also as “clip-on” engines for bicycles. It is stated in contemporary press that by 1903 Thomas was the largest manufacturer of single-cylinder, air-cooled engines.

Looking for news to help further establish the brand, in 1909 William Chadeayne, then serving on the company’s Board of Directors, set a U.S. transcontinental record of 48 days riding a Thomas Auto-Bi. The arrival of the Ford Model T depressed sales of all motorcycles, and by 1912 Thomas refocused on automobiles like his Thomas Flyer, and discontinued motorcycle manufacture.

With its gem-like appearance due to liberal nickel plating of its open mechanicals, the Auto-Bi is a feast for the eyes. This accurately restored Thomas Auto-Bi is on loan from Rick Salisbury and is among many very interesting and innovative early motorcycles you can see when you visit the National Motorcycle Museum. Hopefully the Auto-Bi will be part of the upcoming American Transportation Innovation exhibit featuring the Museum’s 1911 Steco Aero-Hydroplane and Cycle Car which will open early in 2019.