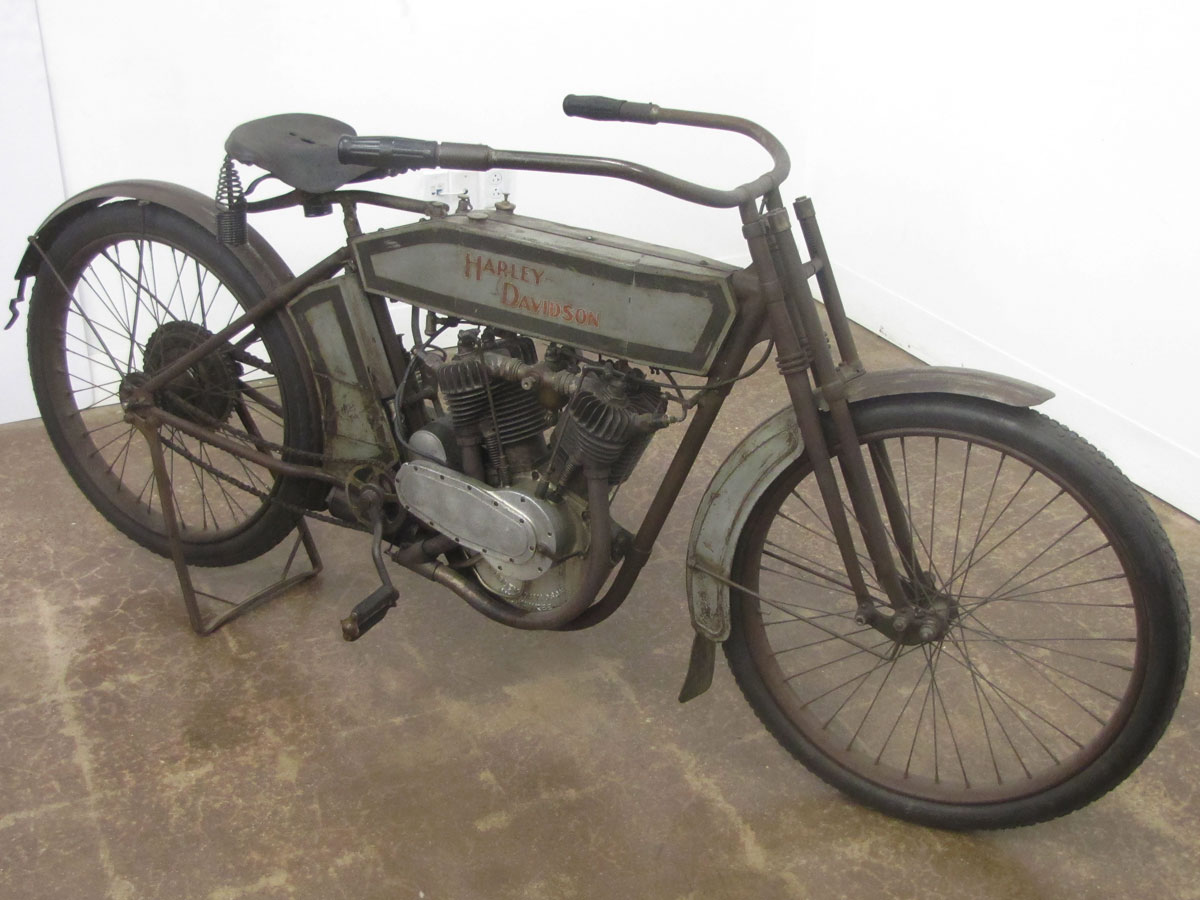 Motorcycle design and features offered were changing fast in the era of the introduction of the Harley-Davidson X8E. Indian had launched their first V-Twin in 1907, Harley’s first came in 1909. Indian offered electric starting in 1914 and Merkel was experimenting with rear suspension and spring-driven self starting. Harley-Davidson’s first V-Twin had some technical problems including belt-drive that didn’t work so well. After only 27 were made, production was stopped. The revised 61 cubic inch V-Twin machine was re-introduced two years later in 1911, but big improvements really hit in 1912.

The 1912’s advances included a lowered seat height and the first sprung seat post offering four inches of seat post travel: the Ful-Floeting* Seat. Also new with this model was the chain final drive. If you liked to coast downhill the new free-wheeling clutch, in the rear hub, offered that possibility. A coaster style brake could slow you down. New skirted fenders hinted at streamlining and kept more dirt and mud off the rider and passenger. Engine improvements included self aligning bearings supporting the crankshaft and roller bearings for the connecting rods. The crankcase breather put a little oil mist onto the primary drive chain. With the pedal crank now mounted in eccentrics the chain to the rear wheel could be adjusted easily. Wheel and tire assemblies were at 28 x 2.50, handlebars were long and wide, the wheelbase at 56.5 inches and weight was at about 312 pounds making for a stable machine, ready to traverse America’s sometimes rutted roads.

It’s easy to imagine the founders, Walter, Arthur, William and William, in business about ten years and now in their 30’s, proudly surveying their new twin, especially after their experience with the 1909 machine. Breaking company tradition, two years later they would start a formal racing program.

In its handsome Renault Gray, in high revered original condition, you can take in the 8XE and a wide range of other interesting Harley-Davidsons at the National Motorcycle Museum in this 115th year of the Harley-Davidson Motor Company.

*In their advertising literature, Harley-Davidson referred to their new seat suspension design as “Ful-Floeting” and modernized the spelling.