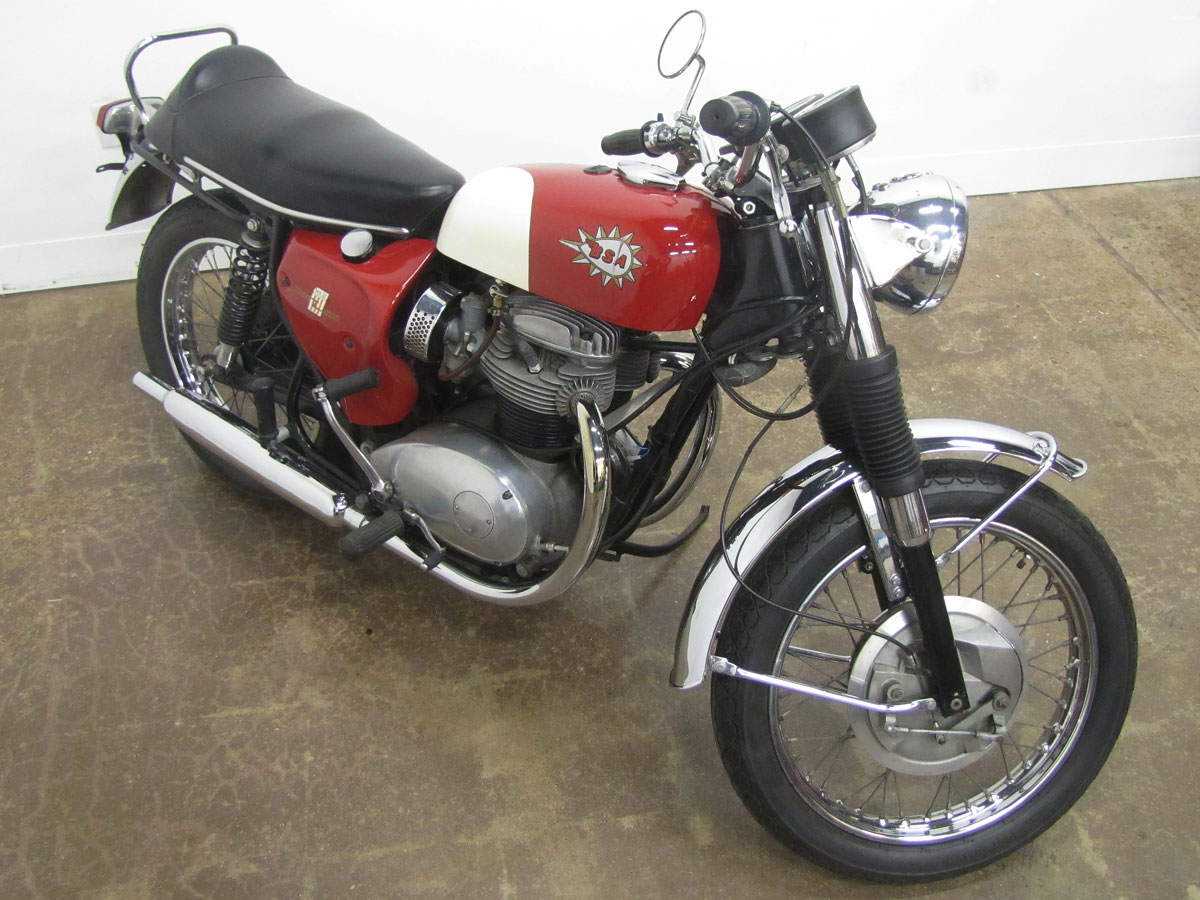 Looking back, British motorcycles were at a peak around 1967. The Triumph Bonneville never looked or ran better, and BSA had refined their unit construction A65 650 twins to sell well in the American market. Soon Norton would release the new Commando. Triumph and BSA offered production racers for dirt track competition; BSA the high or low pipe Hornet, Triumph, the TT Special. Both were track-ready with open exhausts, no lighting and numerous factory race kit parts were available and the racing was good.
One notch down from the Hornet was the street legal Spitfire which arrived in 1966 and also used the two gallon fiberglass fuel tank and side-covers of the Hornet. Manufactured from 1966 – 1968, it had classic BSA styling. Initially at 10.5 :1 compression ratio, running Amal GP carburetors and new 12 volt electrics, the Spitfire would run almost 120mph and was BSA’s fastest production motorcycle to date. BSA A65s in various factory spec found their way to dirt track, hillclimb, drag race and road racing competition.
The first Spitfire models were more competition oriented and used Amal GP carburetors. Many customers switched to Amal Concentrics for easier starting and smoother around town running. BSA made the switch to Concentrics for the 1967 model year, also dropping velocity stacks in favor of individual chrome air cleaners that improved engine life. Aluminum hand controls were also added in 1967 and the voltage regulating Zener diode was relocated to improve its cooling. In 1968 a larger twin leading shoe front brake was introduced. For 1968 the Spitfire was rated at 53bhp for its 654cc engine compared to 60HP for the new 740cc BSA Rocket III; Honda’s soon to be released CB750, 736 cc’s, was rated at 67HP. The BSA factory entered at least one specially prepped Spitfire for the 1968 Isle of Man TT. Timed at over 132 miles per hour on a fast section of the course, it finished third.
When you visit the National Motorcycle Museum you can view a number of BSAs including this Spitfire, an early Rocket III, the recently featured BSA Bantam and several Gold Stars in dirt track and road race trim plus a rare BSA Y-13 v-twin.
Specifications