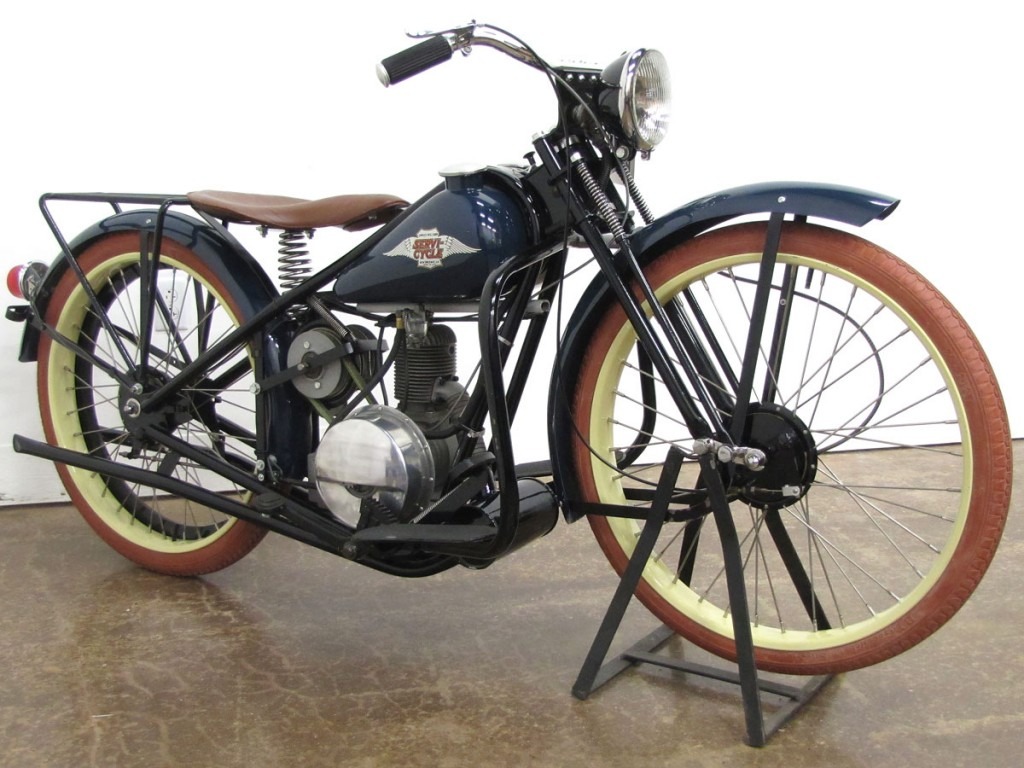 American motorcycle manufacturing is great for its entrepreneurs. Right from the beginning we see ambitious, inventive people taking an idea and working to build a company, make an innovative product that sells well. But that didn’t stop with the American motorcycle industry shrinking from over 200 companies to just three after the crash of 1929, then with Excelsior shutting down in 1931, only two.

The inventive Joseph Paul Treen of Baton Rouge, Louisiana saw that post-Depression, 1935, Americans could use a lightweight motorcycle. With $25 of family cash he created the Simplex Manufacturing Company. At first the Simplex was direct drive and at every stop the engine was shut down, the compression release activated, and restarting was by pushing! Over time variable speed drive and a real clutch were added. Treen favored evolution of his machine rather than making a new model every few years, and improvements might show up any time of year.

The featured Simplex Servi-Cycle is from late in the company’s production, employs 20 years of development, is the height of Servi-Cycle design. The engine, a simple 150cc two-stroke, employs an “overhung” crankshaft with no bearing opposite the output side; a bottom end rebuild could be done without pulling the cases apart. Note that the remote float carb feeds directly into the crankcase, a sort of rotary valve design. The engine employs dual spark plugs, always a good idea in older two-strokes, before synthetic pre-mix lubricants.

The chassis is interesting as well. A tubing bender’s dream, each side of the frame is a continuous loop of steel tubing. Rear suspension is only via a sprung seat, up front is a “springer fork” not unlike that on pre-1949 Harleys. There’s lighting and even a Simplex brand odometer to track your progress. The large wheels work well on rough rural roads and city streets alike. On earlier models, the center stand folded to become the footpegs, but this later machine has floorboards. Stepping back from it all, Treen’s ideas were solid; the Servi-Cycle is unpretentious, just “serves” its rider. But competition from other makers, especially the Far East, was strong by 1960 when Simplex folded after 25 years making a range of motorcycles, scooters, even three wheelers.

Today any version of the Simplex Servi-Cycle is desirable to collectors many of whom grew up with these machines, or had parents who did. They are an important part of America’s motorcycle manufacturing history as most agree that Simplex created America’s most popular lightweight motorcycle.