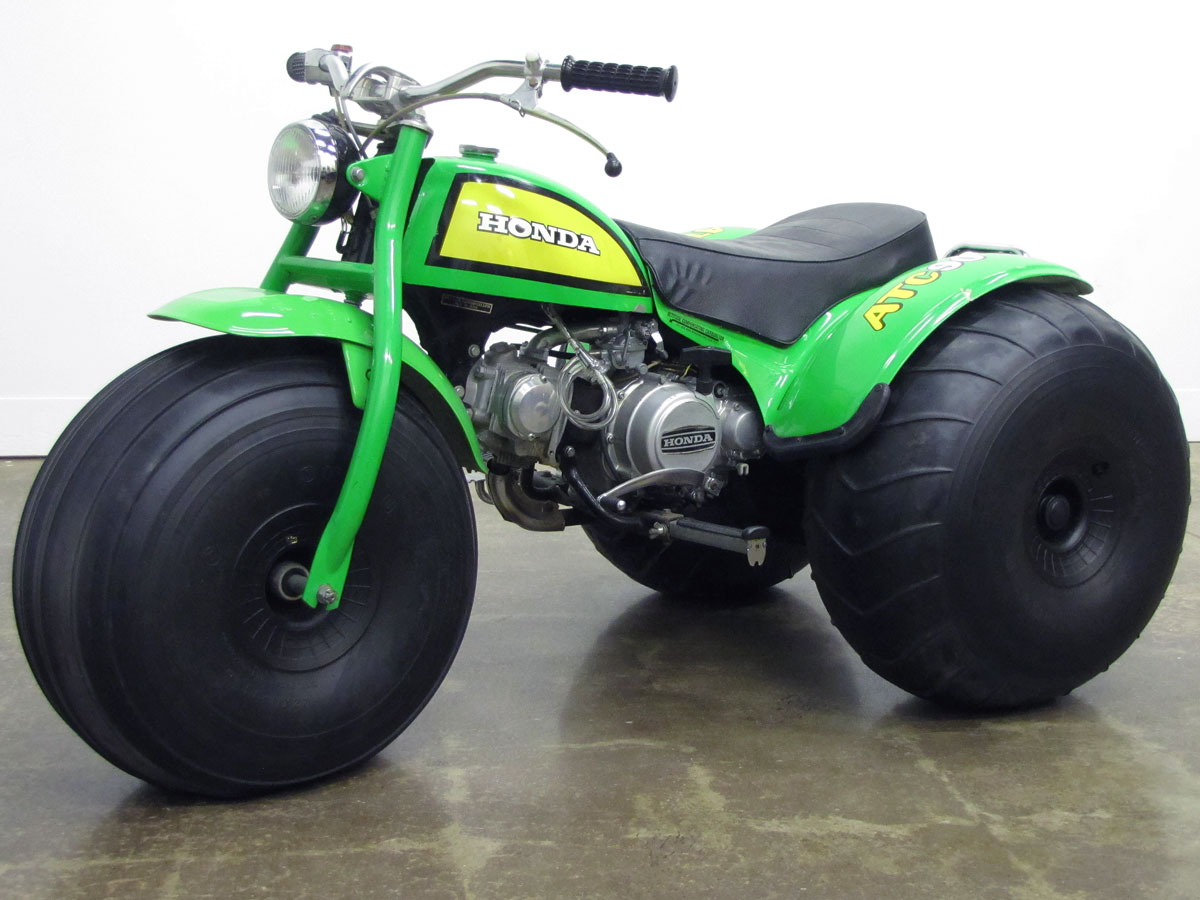 What began as back room tinkering at Honda in the late 1960’s became a product now representing over 30% of many motorcycle dealers’ unit sales. Honda dealers asked for a new product that would offer sales in the winter season, a time when sales were off in the northern United States. This original Honda US90, a three-wheeler with a flotation tire and wheel* design then used on some American made six-wheel machines, was the answer.
Originally dubbed the US90 due to America being its first market, the machine soon became the ATC90; the All Terrain Cycle. It borrowed the engine/ transmission unit from a Honda Trail 90, an 89cc OHC single with a dual range transmission, but used rope starting. The frame was pressed steel with rigid tubular forks and a live rear axle also with no suspension. The cushy tires absorbed a lot of surfaces irregularities and was easier on trails than knobbies. Where most bodywork on today’s ATVs is polypropylene, the ATC90 used a steel fuel tank and front fender and a fragile fiberglass seat/fender unit. Summer Yellow, Bright Red, Aquarius Blue and Parrot Green were sporty new color offerings; it was the 70’s.

In desert and rural areas the ATC90 was a hit; urban Honda shops sold fewer. Honda got enough patents that the other OEMs had difficulty competing unless they bought rights, which some did. But what appeared to be a stable machine invited young and unskilled operators who often got into trouble. The solid rear axle called for a lean to the outside to turn at low speeds, the under 40 inch wheelbase made wheelies come easily. Injuries started to rack up, as did lawsuits against Honda, hundreds of millions in lawsuits eventually, and the CPSC stepped in and banned three-wheelers.
But more stable four-wheeled ATV designs were already on the drawing boards of half a dozen manufacturers and even wider audiences were found in racing, agriculture, emergency, hunting, oil field service and more. What was a $600 plaything in 1970 is now a key piece of transport worldwide and has likely taken a big bite out of small tractor, golf cart and off-road motorcycle sales. Just about everywhere you look, a modern ATV is at work, or play, with some high performance and four passenger units topping $20,000.

This Honda ATC90 is part of the DIRT RIDING USA exhibit presented by J&P Cycles, and is one of only two ATVs in the entire National Motorcycle Museum. Take in almost 50 dirt bikes from Europe, England, Japan and America when you visit plus over 450 other motorcycles of all types, 1899 to present.
*If a tire puncture occurred on the early ATC90, the entire wheel tire unit might need replaced. In 1982 the retail price was $230, then about three to four times the price of a 4.00 x 18 motorcycle tire! Cheaper demountable tire designs came in 1975.

1956 Nimbus 750 FourConspiring to be the Fastest Scroll to top