Conspiring to be the Fastest

IT’S HERE!!
Arriving at the National Motorcycle Museum safely in a very sturdy constructed crate  – the Rollie Free Vincent is here for all to admire. 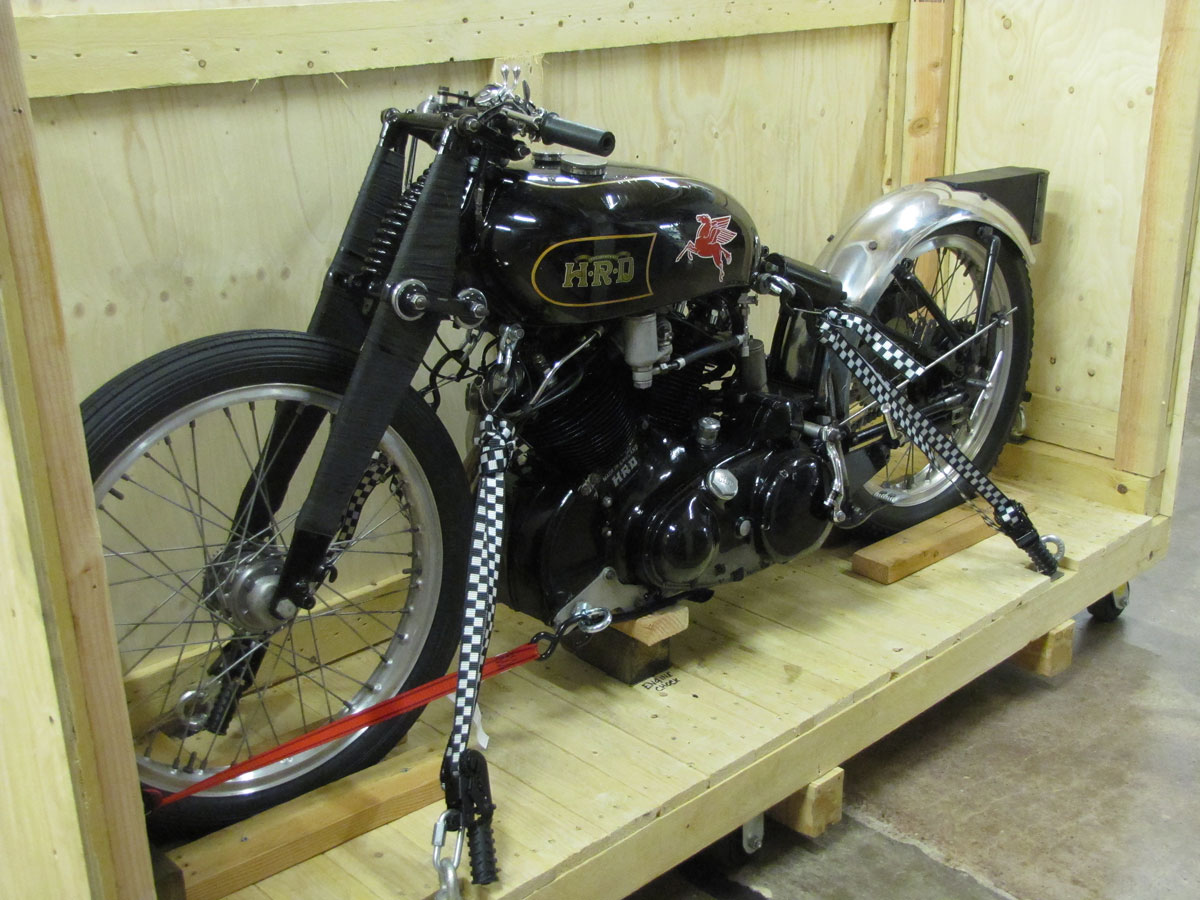 In the 1930’s Rollie Free, a dedicated motorcyclist and skilled rider/mechanic, had gained plenty of experience as a professional rider and driver. He was an Indian man, modified his own bikes and ran the dry lakes in California, but had never raced at Bonneville. He also never had much good to say about Harleys. He felt that Harley-Davidson had given him an inferior bike at a race once and bore a grudge thereafter. After Joe Petralli’s 1937 record run, Rollie Free fumed at the fact that Harley-Davidson held the Land Speed Record at over 137mph.

Bugatti driving, British bike enthusiast John Edgar was a wealthy sportsman and enjoyed the better things in life. Exposed to the new Vincent-HRD motorcycle in 1948, and learning of its extreme performance, a “what if” agenda flashed through his head. Simply, Edgar wanted to own the fastest motorcycle in America. Edgar met with Phil Vincent in Los Angeles. They discussed building a bike to top the record. Phil Vincent, ever the promoter said “we can do that”. He telegraphed Phil Irving in England and told him to commence the project. Irving set the bike up to run on alcohol, made the high lift cams by hand, fitted special Amal carburetors and racing tires on Avon alloy rims. The bike was taken to a local aerodrome where rider George Brown achieved close to 143 MPH before he ran out of runway. The bike was “fettled” by the Vincent works and shipped to California.

Through friends John Edgar had learned about Rollie Free. Stopping by Free’s auto repair shop one day, Edgar proposed that since he had high speed experience, Free should ride the bike he had ordered. Free, having just had some bad luck at the Indianapolis 500 time trials, saw this as an opportunity to smash Harley’s then ten year old record and signed on to ride John Edgar’s bike. Time was short, but the specially built HRD arrived in California in August. It was stripped of its street equipment and tested at Rosamond dry lakes in the Mojave Desert.

Free’s initial run at Bonneville was very bold. After running up through the gears he would achieve the prone position for better streamlining. Now his steering was by looking DOWN at the black oil stripe on the salt instead of ahead. Unfortunately, Free’s leathers had a small tear and began to billow like a drag chute. His time was 149+ , a record but not the magic 150 MPH they had promised. For the back up run he decided to run in a bathing suit and a helmet for less drag. He had to borrow a pair of tennis shoes which were way too big. He started his run and ran through the gears and assumed the prone, feet back position again. The bike was still accelerating crisply in high gear. Free was holding on watching the black line on the salt. As he neared the end he actually became tired and fearful he might fall off and began to pull himself up. He was timed at 150.313 MPH. The two way average was now 150.00 MPH. Free later claimed he could have done 151 MPH if it wasn’t for the size 12 tennis shoes flopping around!

The Vincent-HRD works then adopted a new slogan “The World’s Fastest Standard Motorcycle. This is a fact, not a slogan”. The bike was in essence “stock” in that all of the parts were available over the counter to tuners, might have run in the PPF-1000 class if the SCTA had such designations back then. Edgar’s bike was also the prototype “Black Lightning,” a limited production racing model specially built for record attempts by sportsmen.

The bike pictured here is the very motorcycle used for the Bonneville record run. It served as the prototype for the famed Black Lightning that came later. John Edgar rode it on the street for a few years after Rollie Free set the record. Back in caring hands, all the components used in the record run are in place. This motorcycle is possibly the most famous, most storied motorcycle in history and it’s on view at the National Motorcycle Museum through Spring, 2018. Never before on display in a museum, this is your opportunity to stop by and take a close look at “the bathing suit bike” and about 15 other land speed record motorcycles in the exhibit STREAMLINERS, presented by J&P CYCLES.