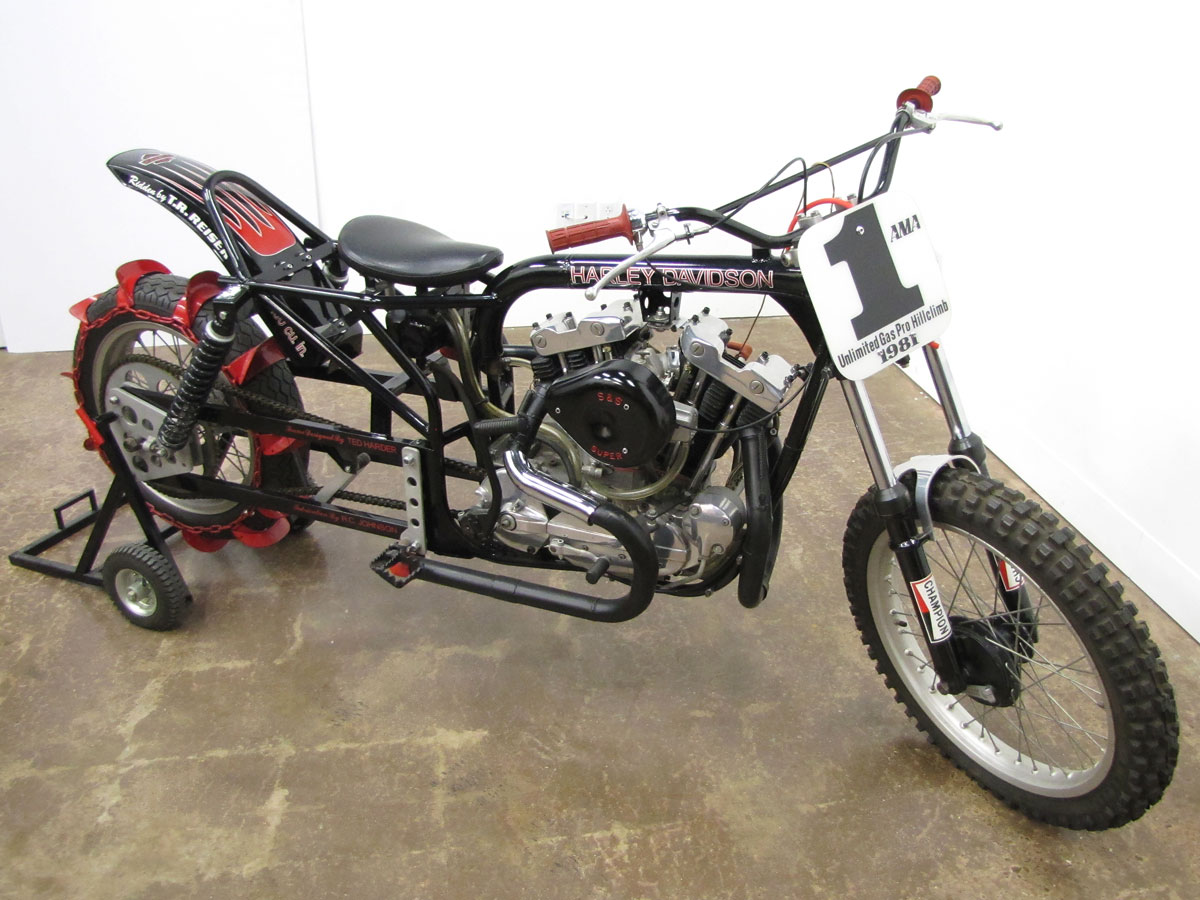 THE BUILDER and RACER: Tom Reiser
Tom Reiser was introduced to motorcycles by his father who bought a used 1948 Harley-Davidson FLH and involved Tom in construction of a sidecar. This rig was not so much recreational as it was family transportation. That was 1954 when Tom was nearing 16, and he was bitten hard by the motorcycle bug.

Living in Columbus, Ohio he soon went to work for what is now considered “the oldest continuously operating Harley-Davidson dealer,” A.D. Farrow. At first he just did odd jobs around the shop but showed his skills and became a mechanic. Soon he became obsessed with building a Chevy V8 drag bike which he thought would be the ultimate straight line machine. He was very successful in building a machine much more sophisticated than that of the Michigan Madman, E.J. Potter; Tom’s bike had a real clutch so he could do dead stopped drag racing starts. Tom’s bike was also very finished looking, compact and safely constructed, and was dubbed, “Tom’s Bomb.”

After Reiser got the V8 bike built in 1961, he raced it quite a bit. With speeds and brakes as they were, soon he developed a parachute system for it. He had “the V8 thing” pretty much out of his system compounded by another rider wrecking the bike at a race meet. And then he was invited to restore it and make it part of the window displays at Farrows; iconic at the old West Broad Street store. Reiser then went to work building drag bikes around the Harley-Davidson Sportster engine which had debuted the same year he went to work at Farrows, 1957. Again showing his frame and engine building prowess Tom won the Pro Fuel Motorcycle Drag Racing Championship in 1964.

Next Reiser turned his attention to hill climb competition, won the AMA’s Top Fuel Hillclimb class in both 1992 and 1993. And earlier the bike he built for his son T.R. powered T.R. to become the Unlimited Gas Pro Hillclimb Champion in 1981. In addition, six hillclimbing championships have been snagged by other riders on Reiser-built machines: Randy Gabriel in 1974; Tom “TR” Reiser Jr., Reiser’s son, in 1981; Steve Dresser in 1995, and James Large in 1997, 1998 and 1999.

Reiser has won a total of 23 championships on drag strips and hill-climbs in America. His focus has been using mostly his chassis designs and Sportster engines, a formula that has worked very well. Of course 50 years after “Tom’s Bomb” his own shop is still on South High Street in Columbus where he continues to keep his customers happy with full service on his favorite American brand, Harley-Davidson. “Tom’s Bomb” is on permanent display at the National Motorcycle Museum as is his “parallelogram swingarm” Sportster hillclimber. Several of Reiser’s other drag and hillclimb creations are displayed at other motorcycle museums in America. 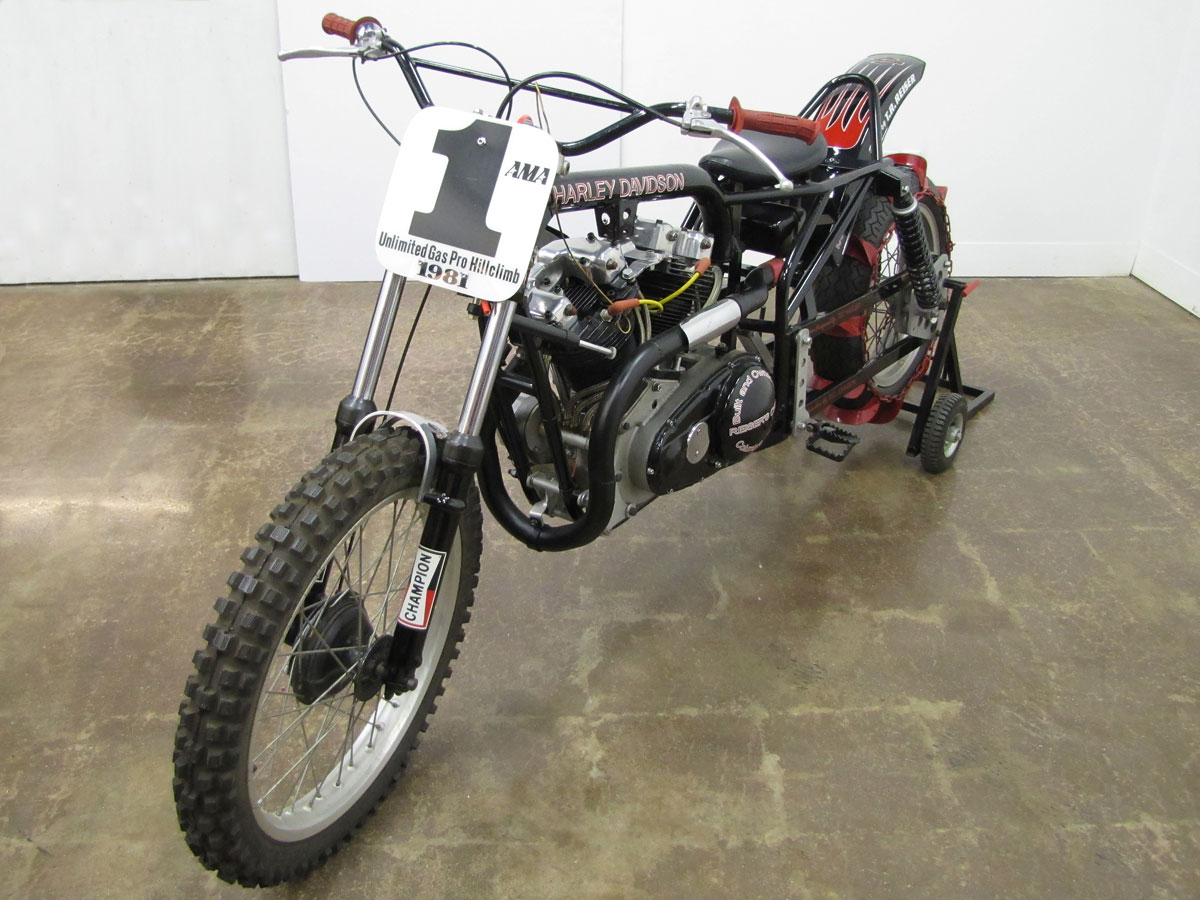 THE MOTORCYCLE: Harley-Davidson “Parallelogram” Pro Gas Hillclimber Built by Tom Reiser
Built by the expert and famous Harley-Davidson builder Tom Reiser, this Sportster powered Hillclimber powered Reiser’s son T.R. to become Unlimited Gas Pro Hillclimb Champion in 1981.
Although Tom Reiser is well known for his flamboyant fabrication, “Tom’s Bomb”, a small block Chevy engine powered drag bike he built in 1961 at the age of 22, Reiser has won a total of 23 championships on drag strips and hill-climbs in America using more traditional motorcycle engine powered racing machines. His focus has been Sportster engines for his race bikes, which he has built to run on up to 92% nitromethane at a 13:1 compression ratio.
Note the innovative frame and swingarm which Reiser points out, Kawasaki experimented with in road racing and motocross. The concept was to create a swing arm setup that didn’t move the rear axle to swing arm pivot location thereby maintaining chain tension, making a more stabile rear suspension operation, like a car’s front suspension works a tire straight up and down. Keeping the rear wheel on the ground and minimizing swing-arm flex is key to quick, straight assaults on the hill. After testing, Tom decided it was too heavy, and the design was not continued.
Reiser’s own hill climbing career includes wins in 1992 and 1993, but was interrupted in 1994 by a badly broken leg. By then he was in his mid-50’s so he continued to build engines and bikes for his son and other racers. Adding to his early drag racing success as Pro Fuel Champion in 1964, Reiser won the AMA’s Top Fuel Hillclimb class in both 1992 and 1993. In addition, six hillclimbing championships have been snagged by other riders on Reiser-built machines: Randy Gabriel in 1974; Tom Reiser Jr., Reiser’s son, in 1981; Steve Dresser in 1995, and James Large in 1997, 1998 and 1999.
Specifications:

**The cupped steel devices welded to the tire chains, “ iggers”, were outlawed when the Pro Gas Class was eliminated. #80 chain wrapping the rear tire is the maximum allowed by rules.