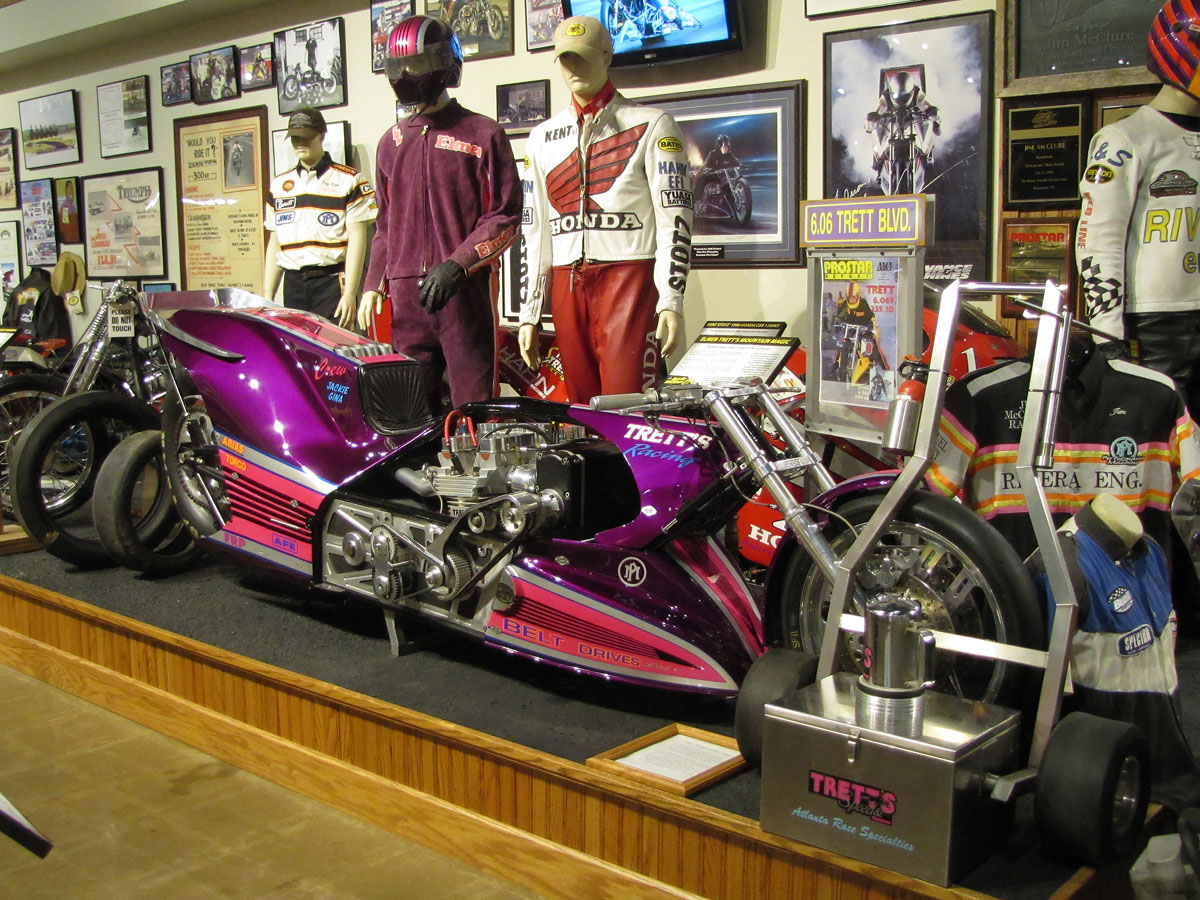 Recently, Elmer Trett’s daughter Gina visited the National Motorcycle Museum. She had never visited the Museum before and was at once pleased and 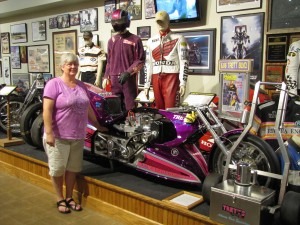 awestruck to see her father’s Mountain Magic drag bike displayed. It’s been just over 20 years since Trett’s 1996 fatal crash at the NHRA Nationals in Indianapolis. Indy is also where in 1983 Trett was the first to break the 200mph barrier.

Drag racing was a family business for the Trett’s; everyone played a role both in the shop and out on the road at races. For more than 20 years, Elmer Trett was unmatched in Top Fuel Motorcycle. He was the first to run 200, 210, 220, and 230 mph. He also set the record 15 times and captured 8 national championships and would always give credit to his team, his wife and two daughters, for his success.

Between 1984 and 1996, Trett campaigned five machines named Mountain Magic. He used the bike at the Museum for his historic 6.06-second run. At first, per rules, the machines used Kawasaki cylinder heads. In time, they would use an engine built entirely by Trett, patterned after the Keith Black V8 motor so popular in Top Fuel and Funny Car racing.

When Elmer Trett died in a racing accident in 1996, he was nearly a tenth of a second quicker than anyone else in the class, and had recorded the ten fastest speeds on a motorcycle. There’ll never be another like him. Inducted into the AMA Motorcycle Hall of Fame, his biography there summarizes his amazing career: At the time of his untimely death Trett held the ten fastest speeds ever on a Top Fuel bike. He was the first to pass the 200, 210, 220 and 230 mph marks, and he held the record for three of the fastest elapsed times in Top Fuel. Perhaps equally as impressive as his records was his three decades at or near the top of the sport. One writer said the legend of Trett is his longevity.

Elmer Trett was so important to the Top Fuel Motorcycle—and drag racing in general—that the NHRA recognized him as one of its “50 Top Drivers of All Time”. As one observer suggested, “The name “Trett” is to motorcycle drag racing what “Garlits” means to top fuel racing and “Yeager” means to jet aircraft.”

When you visit and walk through the drag racing exhibition area at the National Motorcycle Museum you can view Elmer Trett’s Mountain Magic and a dozen other fine championship level hand built drag bikes, and see some great drag racing-related photos and artwork. To learn more about the history of motorcycle drag racing, pick up a copy of John S. Stein’s Motorcycle Drag Racing, A History in the Museum store.