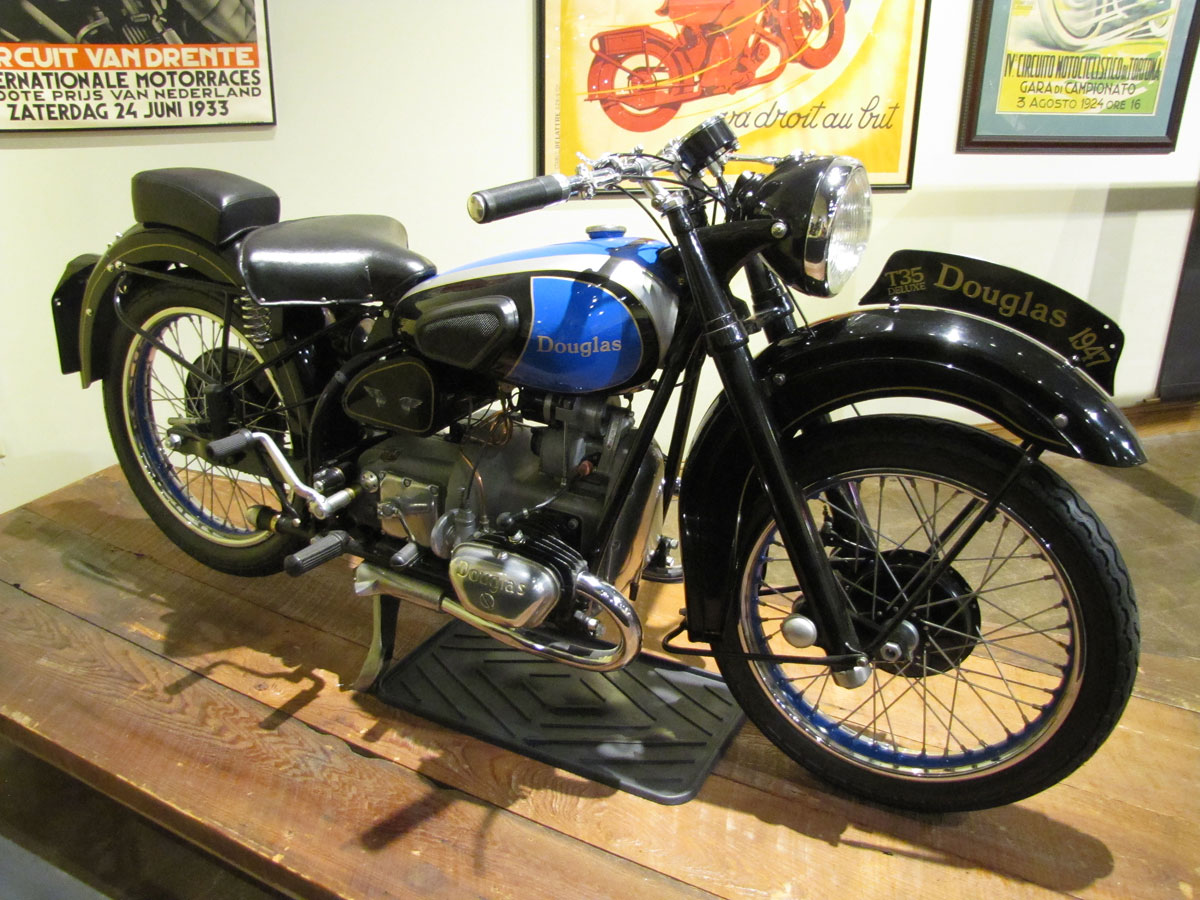 Much like some Moto Guzzis from the pre-World War II era, at first glance there’s nothing special about the design of this Douglas. A closer look at Douglas motorcycles reveals all sorts of interesting technology and design.

Douglas, a brand not widely imported into America, innovated well beyond the “big three” British manufacturers. Some later models like this T35 used sophisticated torsion bar rear suspensions, overhead valves and employed alloy center stands and exhaust collection boxes. The Douglas well detailed opposed twins were also remarkably smooth, and they had good success racing at the Isle of Man in the 1920’s.

Possibly because it lacked a large displacement engine, the T35S line never went on to achieve the classic status of the Vincent. The original design was updated with a Mark III version in 1948 and a Mark V in 1951. The same basic machine would eventually become the wonderfully named Douglas Dragonfly in 1955. By then it had lost its torsion-bar rear suspension in favor of a standard coil-spring setup. The Radiadraulic fork was also out, replaced with the patented leading-link design created by Ernest Earles in 1953, the standard design on BMW motorcycles beginning in 1955.

William and Edward Douglas founded Douglas Engineering in 1882. Based in Bristol, England, they made their first motorcycle in 1904, a 200cc opposed twin direct drive machine dubbed the “Fairy.” Arriving in about 1920, Douglas is also credited with making the first disk brake system for motorcycles. To get an idea of their manufacturing scale, by the end of World War I Douglas had built 23,000 special motorcycles for the British military.

When you visit the National Motorcycle Museum you can look over this 1947 Douglas T35S and also a fine 1930 Douglas T-6. The Museum, being a “classroom” of sorts, helps you study Douglas and early Moto Guzzi suspension. You can see the various ways opposed twin powered motorcycles have been engineered over the years and used by a variety of manufacturers. And don’t miss the “boxer” Economic Motor kit mounted on a Harley-Davidson bicycle!