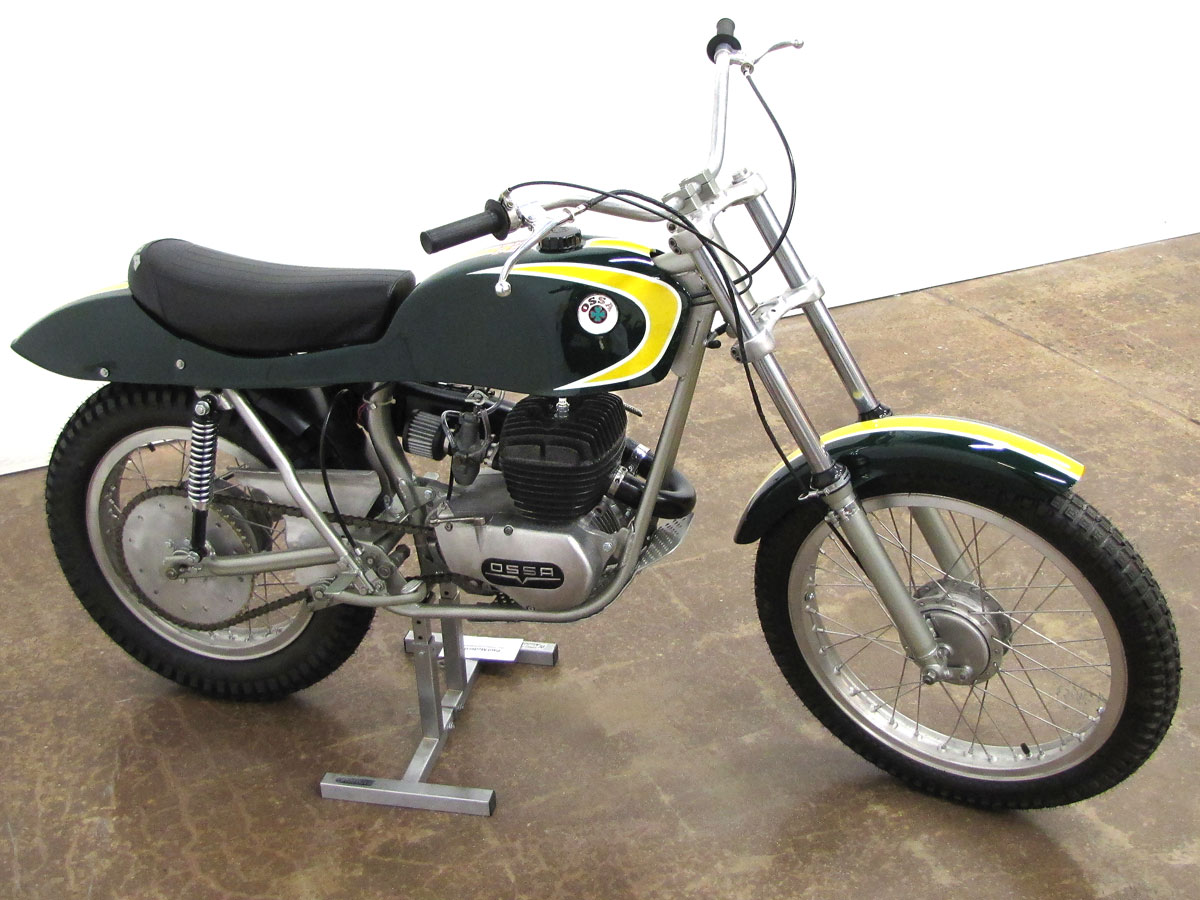 The Spanish manufacturer Ossa made a wide range of machines for every form of competition, including observed trials, some street bikes as well. Between 1969 and 1971 the Plonker trials bike was their 250cc offering distinguished by a rich green and yellow paint scheme. Racing success with famed trials rider Mick Andrews suggested a Mick Andrews Replica, or MAR, which appeared in 1971. By the way, “plonking” is another word for trials riding; riding hilly terrain at a careful slow pace, keeping one’s feet on the pegs, never touching down.

This Plonker has a bit of history. Its original owner Roy Lanford, an Englishman trained to ride in the British military, emigrated to Canada. In the course of his general long held enthusiasm for motorcycles, Roy became part of a motorcycle club in Ottawa that held a variety of off-road events that Roy participated in sometimes riding this Plonker. He hung on to the Plonker for decades but, hoping to give it a new happy home, eventually gave it to Jay Gaard, its current owner. Jay did a complete restoration on the machine.

Much like Ducati, Ossa’s motorcycle production grew out of the imagination of a thoughtful person seeing the need for post-World War II transportation and jobs for his countrymen. But Ossa was originally formed in 1924 as a manufacturer of motion picture projection equipment, and the clover shaped logo is actually related to projector mechanisms. Manuel Giro and a few engineers he gathered brought their first bike to market in Spain in 1949. Later working with his son in the company, entering races with his machines as they evolved helped him grow an international market. History shows that in 1967 Ossa entered two 175’s is the 24 Hours of Barcelona, and won first and second place!

But world wide distribution of good performing, less expensive Japanese motorcycles and a crippling strike in 1977 weakened the Ossa company. Ossa merged with Bultaco, but by 1982 the factory closed down.

Riding at very low speeds, one at a time a competitor navigates extreme obstacles in marked off course while attempting to avoid touching the ground with his feet. The obstacles may be natural or constructed. The course, several hundred feet in length, is carefully contrived to test the skill of the rider. Competitor is scored by an observer. Each time a competitor touches the ground with a foot, a “dab,” the penalty is one point. Low point rider wins event. Bikes are short wheelbase, high ground clearance and run enduro tread pattern with sub-10PSI tire pressures for large contact patch/traction.