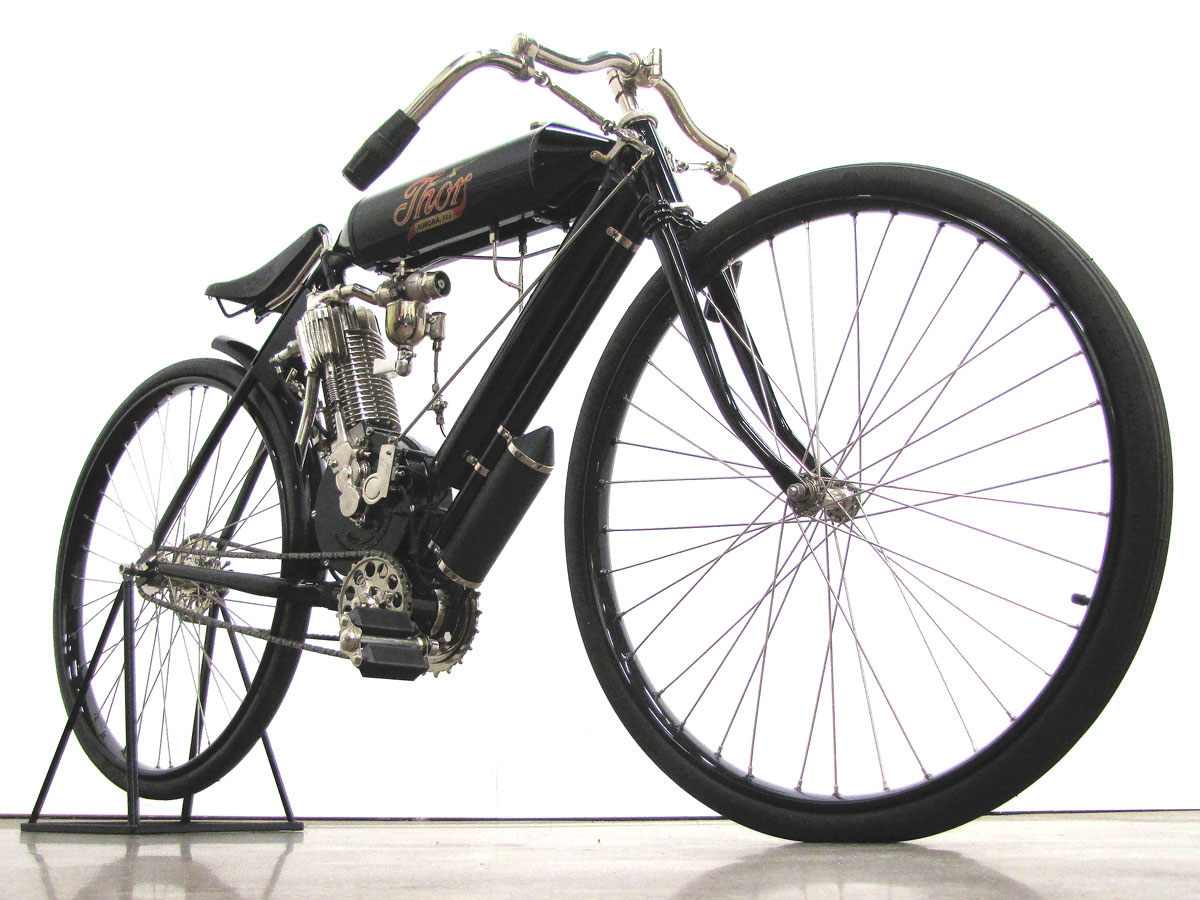 As early as 1910 banked oval board tracks were being constructed in big American cities, most used primarily for auto racing. Much like NASCAR, starting around 1909, the promoting organization arranged to travel groups of race car teams and motorcycle teams from town to town and put on racing events we all wish we could go back and witness live. This ’09 Thor might have spent some time on the boards when it was a couple of years old.
Tuners who build race bikes always strive for low weight. This 1909 diamond-design lugged frame is functional simplicity, and typifies machines from many manufacturers in the era. Dirt track (and board track) race bikes through the mid-1960’s did not use brakes, and downshifting was against the rules, eliminating sudden speed changes, adding to race safety.

Since Indian contracted Thor, Aurora Machine and Tool Company, to build its early single cylinder engines, you will see a lot of Indian engineer Hedstrom’s design in this Thor engine and the overall motorcycle. Note the bell-cranks that carry inputs from handlebar mounted controls are similar to those used on early Indians. The frame is completely rigid, yet the seat is cantilevered to offer some spring effect, also a feature of early Indian race bikes.

Aurora Machine and Tool Company of Aurora, Illinois, maker of Thor motorcycles, was founded in 1886. Soon the company was pouring out hubs, spokes, nipples, handlebars and more. New patents were gained virtually every day. In 1903, the company renamed itself, The Aurora Automatic Machinery Company and began to make their own “complete” motorcycle, the Thor, within a division called Thor Moto Cycle and Bicycle Company. The Thor motorcycle was a tour-de-force using all the experience gained in making castings and machined parts, plus complete engines for the George Hendee-designed Indian Motocycle Company. Thor design did not exactly copy Indian, arguably exceeding its quality and effectiveness, but there were similarities. Thor went out of business between 1916 and 1918. Records do not show exactly when.
This Thor racer is one of over a dozen machines within the Board Track Racing exhibit you can enjoy on your next visit to the National Motorcycle Museum.