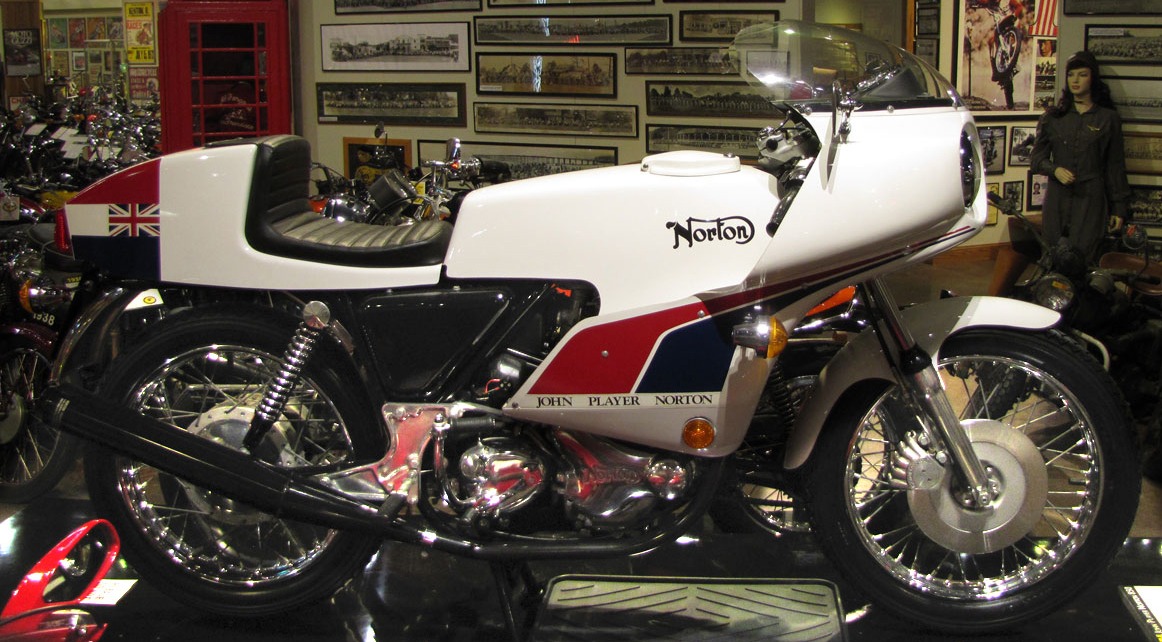 It’s been said that racing improves the breed. Designed around the best pieces developed for the Manx Norton production racer and the Norton Atlas with new concepts like Isolastic driveline mounting, the Norton Commando excelled on the road and track.

Many special versions of the Norton Commando were made between 1968 and the hiatus in production for all Nortons in the early 1990’s. The British-based John Player Tobacco Company took interest in Norton’s racing program after watching the likes of Peter Williams taking many wins for the brand in British road racing events including placing well at the Isle of Man TT in 1971. In 1972 they gave sponsorship support to Williams and new team member Phil Read as tobacco companies did in those times and helped the brand with their racing program. From that relationship came the John Player Special, a special Commando with white full bodywork, dual headlamps and certain mechanicals honoring the John Player Tobacco relationship all in the look of the actual race bikes. The JPN looked the part but the basic Commando or certainly the Production Racer, aka, Yellow Peril were the Nortons you rode if you wanted to win.

At 100ccs stronger than offerings from Triumph and BSA until the Trident and Rocket III arrived, the later Commandos at 828cc’s fared well even against the Kawasaki H1 and Honda CB750. On a twisty road or a race track, the Norton left about everything behind; the stout, well suspended Manx-derived frame and 19″ wheels shod with Dunlop’s famed K81’s made it handle.  Disk brakes came in 1972.

Most British parallel twins are noted for their vibration. Balance was either not a well known science or too expensive to achieve, but engine shake was a given, something you just lived with on big British twins of the era. But a Norton engineer, Bernard Hooper designed the Norton Isolastic system which mounted engine, transmission and swingarm in a separate subframe on rubber mounts. The drive line still shook just as a Harley’s does today, but similarly the rider is isolated from it. For this Hooper won an award of 1000 Pounds Sterling from the Castrol Oil Company!

A British contemporary of Hendee, Hedstrom, Harley and Davidson, James Landsdown Norton began assembling motorcycles with clip-on engines in 1902. The Norton “Big Four” hit the streets in 1908 and Norton himself rode in the 1908, 1909 and 1910 Isle of Man TT races, run on the “short course.” Rem Fowler won the very first TT riding a Peugeot-powered Norton. John Norton died in 1925 at the age of 56 and it is amazing the company thrived into the 1960’s before closing its doors in the 1990’s, largely due to poor management and strong Asian competition. Much like the Indian brand has been revived by Polaris, new ownership of the Norton brand commenced limited production in 2012 and we are seeing some exciting offerings.