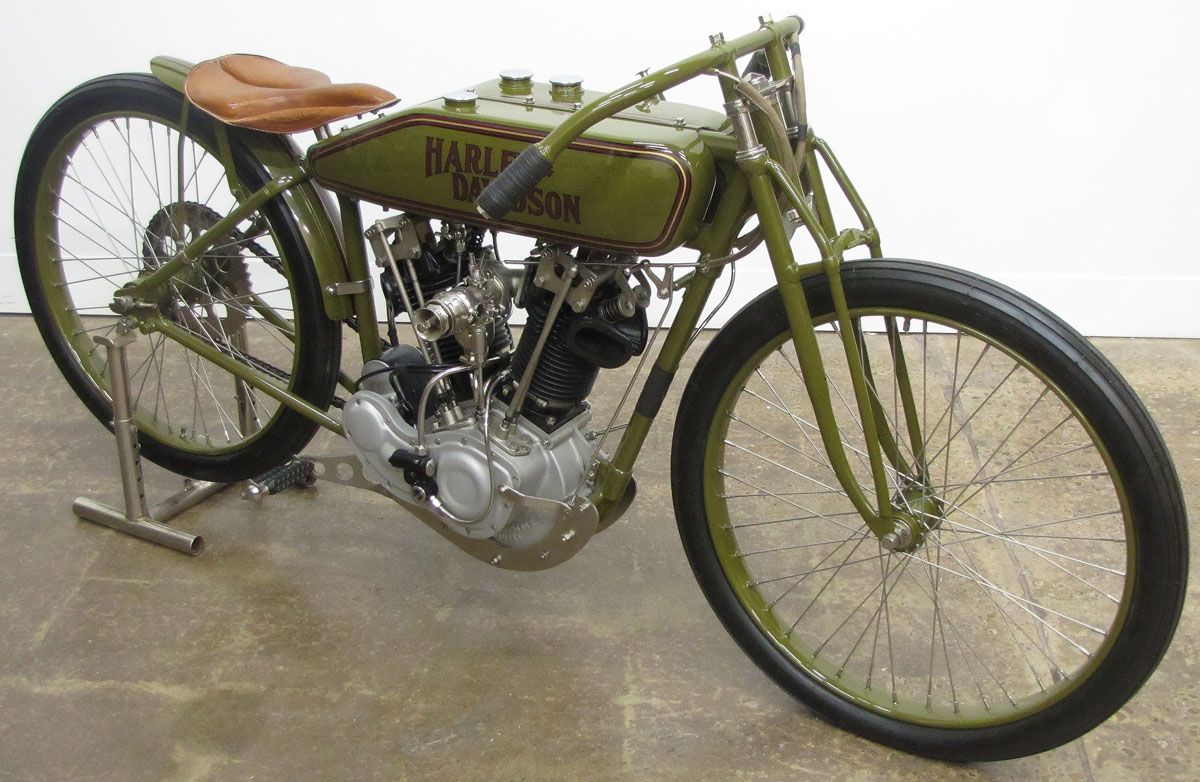 Walking about halfway around the exhibit area at the National Motorcycle Museum will bring you to the Board Track Racing display. There a 50 foot long section of board track is reconstructed, based on the Cincinnati, Ohio board track built about 1910. Lumber dimensions and nuts and bolts closely recreate what such an exciting track offered in the ‘teens; the banking is steep and the surface rough! More important, about ten board track racers are on that board surface, installed as if leaning into the turn. Photos and a nearby video show the action at a few American board track races of the era, helping you understand some of the sound and fury of the racing action of that time.
This very rare, restored 1928 Harley-Davidson factory racer is one of the bikes on display. It’s a machine you can kneel down next to and enjoy fine machinery design; one of the wonders at the Museum. Harley-Davidson finally started a factory-based racing program around 1914 with William Ottaway in charge. Until that time, it was felt by most of the Harley-Davidson management that racing was too dangerous, risked bad publicity for the company. But Indian had been selling factory racers and supporting riders since 1908, race wins seemed to be selling a lot of Indians. So on dirt tracks and board tracks Harley joined the fray along with Thor, Excelsior, Reading-Standard, Merkel, Pope, and of course Cyclone.

The FHAC 8 Valve Oval Port racing engine was a ground up engineered racing engine. Only a few dozen are known to have been made and like other American made racing motorcycles of the era, some made their way to England, parts or Europe, even to Australia. Many cylinder head designs were experimented with, but in using two intake and two exhaust valves per cylinder, it was hoped optimum gas flow would be accomplished. Little was known about the value of back pressure which kept the charge in the cylinder a bit longer, the value of a correct diameter tube header or a reverse cone megaphone. At around $1500 in price it was several times the cost of a fully equipped road machine. It shared little with the road versions of the time except for its 45 degree split between cylinders. Drive is through a jack shaft; this was an era when board and dirt track race bikes were direct drive with no clutch or multi-speed transmission and used gearing set for top speed. Rolling starts were used and the machines were push or pull started. Likely in an effort to prevent sudden speed changes on track, brakes we not part of dirt track racing until about 1965 when AMA changed racing rules.
While the frame appears pretty typical, note the kink near the top of the seat post, a sign of a racing frame. Rake, trail and wheelbase differed greatly from street-going Harleys. An innovation showing here is the motorcycle fork design. Patented by Joe Merkel as a “truss fork,” it can be seen as a predecessor of the telescopic fork and was a popular replacement for many racers. By 1912 road going Merkels were far ahead in innovation, had front and rear suspension and some of their innovations worked on the race track.

Around 1910 Jack Prince was the noted promoter responsible for arranging financing and construction of many board tracks throughout America for automobile racing, but motorcycles raced on them as well. Arguably, board track racing was the scale of stick and ball sports in the Western Hemisphere today, but several things conspired to end it in America around 1925; dirt track competition, mostly on fairgrounds 1/2 mile and mile long courses became the norm.