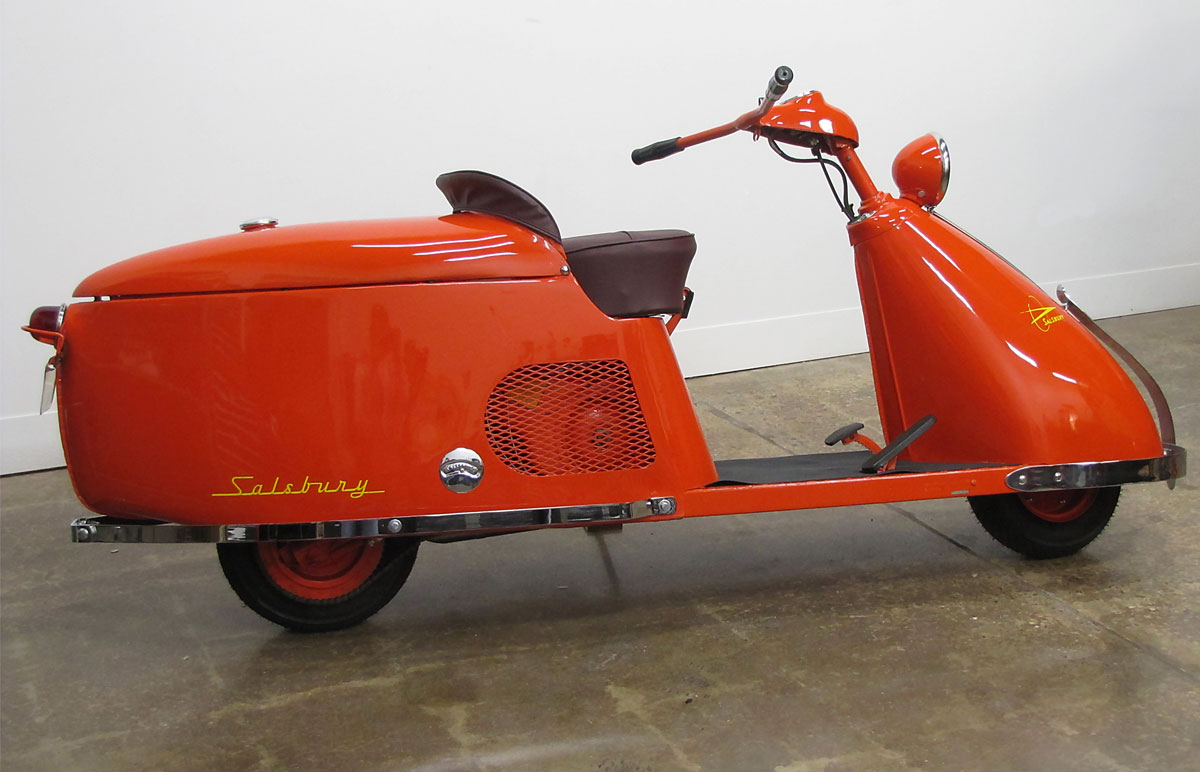 The Salsbury Model 85 is possibly the coolest, most inventive and trend setting of American scooters. It offers great streamlined style, but with its variable speed drive*, remarkable performance as well. The featured Salsbury is a Standard, but a DeLuxe was also produced in small numbers. It featured a more enclosed fairing, recessed headlamp and a clear windscreen, but only one is known to exist today. In a book entitled The Evolution of a Revolution”. Scooters: Red Eyes, Whitewalls and Blue Smoke, author Shattuck states that “Almost every scooter built today uses Salsbury’s basic design.” Most interesting about the Salsbury Model 85 is its Constant Velocity Drive or CVT.

Perhaps similar to a typical women’s bicycle frame design, in strictest terms, a scooter offers a “step through” frame, does not require “throwing a leg over” such as with a typical motorcycle. Way back in the 1930’s E. Foster Salsbury was impressed when he saw Amelia Earhart using a small powered two-wheeler around a California airport. He set about designing and building cheap transportation for post-Depression Americans. His first model, the Salsbury Aero Model Motor Glide was first shown in 1936 and about two dozen were manufactured. They used a friction roller against the rear wheel, which proved an impractical design.

The classic and best known drive line design was rolled out in 1938, and offered “self shifting” on the 50 and 60 Models, later the featured Model 85. Some feel that with this “CVT”, constant velocity transmission, the central placement of the engine, a bit of rider protection, a trunk, step-through mounting and small wheels, Salsbury set the standard for scooter designs of the future. And the streamlined design may have been influenced by Salsbury’s work in wind tunnel testing for the World War II effort. Salsbury also adopted some of the pedal operated controls typical of an automobile thinking potential customers that drove automobiles would have a quicker learning curve. Just step on the pedal and go; engine RPMs move into the power band and then become fairly constant as the CVT automatically “upshifts” for you. Searching “Salsbury YouTube” will turn up numerous operating videos for you.

Less than 1000 Model 85’s were made from 1947-1950. Salsbury engines over time came from several suppliers, and these scooters were assembled in California by the Northrup Aircraft company.