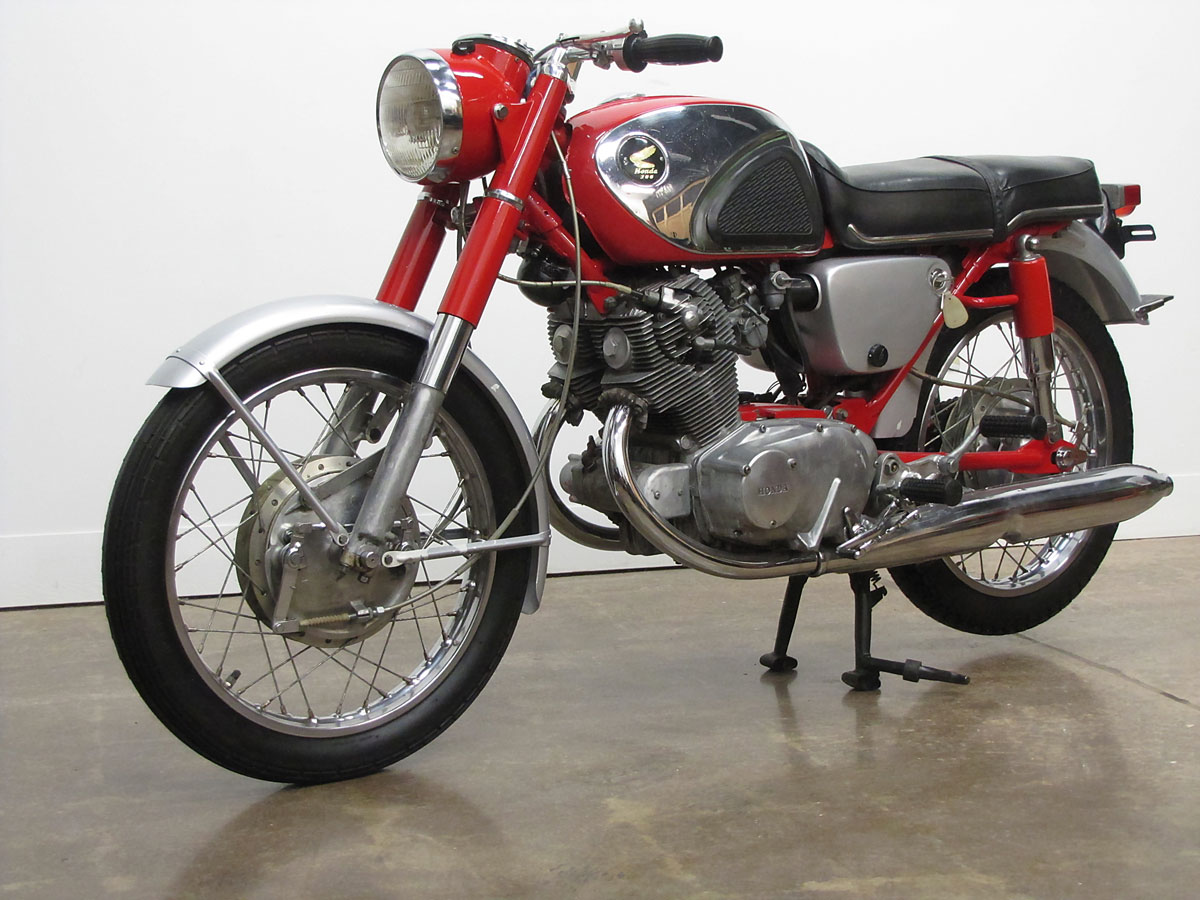 In the late 1950’s Soichiro Honda and his engineers stopped borrowing from other motorcycle designers and made a totally unique overhead cam parallel twin 247cc engine. Initially this engine went into a pressed steel frame similar to those used on NSU motorcycles, later morphed into the Honda CA72 Dream 250 in several iterations. But in 1961 the Honda Hawk, the CB72, and months later the CB77, a more popular 305cc Super Hawk version, hit showrooms. The 250 Hawk and 300 Super Hawk used tubular steel frames, incorporated the engine as a stressed member, had big brakes, flat bars, adjustable footpegs. Honda even offered a race kit deep with tuning parts encouraging owners to go road racing.

Given the 250cc motorcycle was a popular Japanese and European displacement in the 1960’s, the Hawk was a truly a superbike in that displacement class. It was developed in parallel with Honda’s CR72 and CR77 “customer racers” which were true production racers at several times the price, with extremely limited production. In 1961 very few machines from any manufacturer offered double leading shoe front brakes, let alone same at the rear like the Honda Hawk. The adjustable footpegs allowed for three footpegs locations plus rotation, these and flat bars, and kit clip-ons, allowed for the road racer crouch. Using cast lug/brazed, gusseted frames, these machines handled very well. The crankshaft was built up as pressed together components and used one piece connecting rods, ball and roller bearings, a camshaft running on ball bearings, greatly advanced over British and American offerings. Giving a Super Hawk maybe a mile to wind out in top gear, some contemporary tests claimed nearly 105mph top speed.

Downsides? 1960’s two-strokes from Yamaha, Kawasaki and Suzuki made about 25% more horsepower than Honda’s four-stroke in the 250 class. But any of these Japanese 250’s and 300’s could give a British 500 or 650 rider fits unless his bike was well tuned. The fuel tank lead some to refer to it as the “unsightly Honda hump,” and the CB450 which came along a few years later did not much improve on this styling. The four-speed transmissions were good but prone to dogs wearing prematurely causing a skipping second gear. Forward rotating kick-starters were prone to failure, though rarely used due to good electric starting. Some would say the silver painted fenders when compared to chrome from Yamaha was sub-standard design. But looking back, this was a fine 250cc and 305cc offering greatly advanced in engineering, a little heavy, but very tough. As they did in the early 1960’s, the Hawk and Super Hawk have a great following today, but even the best examples are found at well under $10,000. For the 1968 model year, the Super Hawk was discontinued and the more modern in styling CB350 took its place.