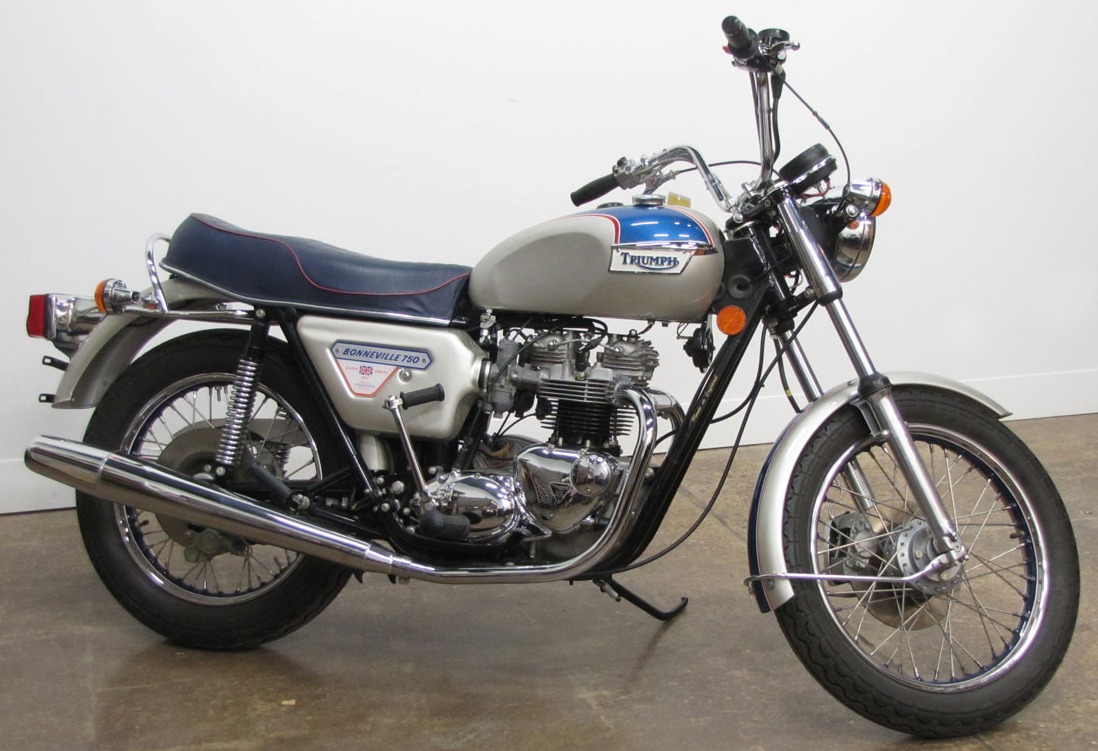 Among about 20 very nice British bikes on display at the National Motorcycle Museum is a Triumph Bonneville T140 Silver Jubilee Limited Edition. These machines were built to commemorate the first 25 years of Queen Elizabeth II’s reign as the Queen of England. Originally the plan was to manufacture a total of 1,000 units for the home market to honor the Queen, but they sold so easily that the factory quickly produced another 1,000 bikes for the American market, then roughly another 400 for general export world-wide. The first 1000 had emblems which read “One of a Thousand”. But when manufacturing exceeded 1000, subsequent bikes were badged “Limited Edition”. The late 1970’s Triumph T140’s are among the most refined of the Bonneville line which began in 1959.

As can be seen, great attention was paid to finishes on the Silver Jubilee. Chrome plating was added to the engine side-cases, the tail light housing was chromed and chrome rims were painted and striped down their centers, a classic touch. Cast alloy wheels were optional. Body paint and badging were nicely designed. Upholstery included red piping. Each Silver Jubilee came with a certificate of authenticity. The bikes quickly became collectors items, some put on display and never ridden.
While staying with the proven and well-liked parallel twin design for over 15 years, by the mid-1970′s Triumph began to update and further improve the basic Bonneville.

Recall that the various Trident three-cylinder machines came on the market in 1969 and lasted until this machine was made in 1977. And by this time the Japanese Big Four had shown their might with constantly evolving Superbikes. Triumph was the sole remaining British motorcycle and would last into 1983, then go bankrupt. BSA was gone by the end of 1972, Norton by 1976. In steps the Bonneville engine reached 744ccs and the engine became rubber mounted. Yielding to US transportation law, the shifter was moved to the left by 1974. If you have the opportunity to ride a Bonneville from this era you will find it a great experience. The engine is smooth and torquey, the riding position traditional.

The year 2001 rebirth of the Bonneville by the newer Hinckley-based company brought us traditional Bonneville styling cues and 790 cc’s. Today’s Bonneville at 1200 cc’s is nearly twice the capacity of the 1959 at 650 cc’s, uses a 270 degree crankshaft and ride-by-wire fuel injection.

Helping you trace the evolution of motorcycle technology is part of what the National Motorcycle Museum is all about. When you visit you can study up close over 450 machines from around the globe.