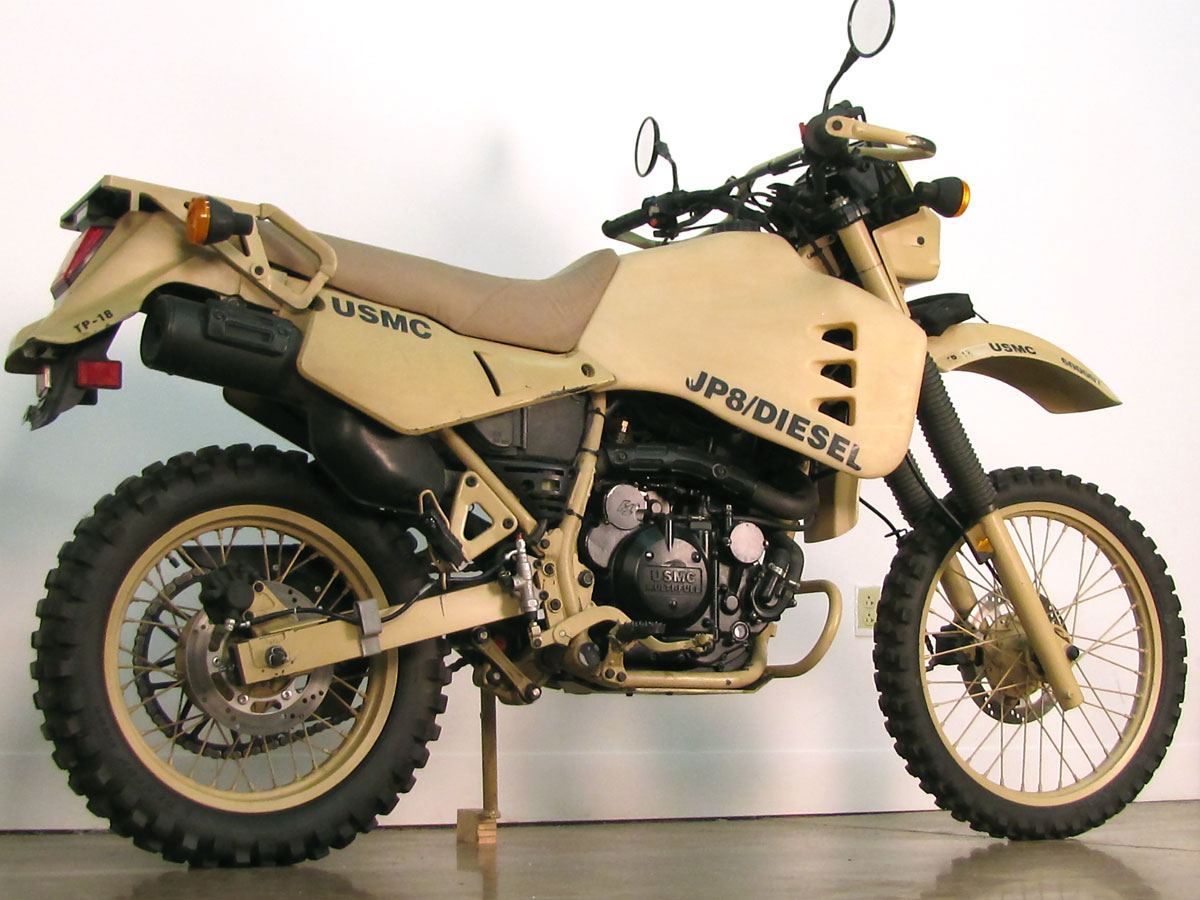 The Military Specification 2004 Hayes-DT M1030-M1 Started Life as a Kawasaki KLR650
Dressed in desert camouflage paint, and disguised behind a military code name, “M1030-M1”, this Haynes-DT machine is actually a Kawasaki KLR650 with a diesel engine. Hayes Diversified Technologies of Hesperia, California saw the potential in the KLR for conversion to run on the multiple fuels the military uses around the world, but some modification was required.

The Kawasaki KLR650, first launched in 1984 is still going strong. It’s the default choice of small capacity, single cylinder, adventure touring bikes that can take you to the mailbox or to the end of the world, and back. It’s tough, flexible, fast enough and reliable.
And in stock trim it’s a good choice for the modern military except for the fact that it is powered by gasoline. Many armed forces around the world associated with NATO (North American Treaty Organization) have determined that all of their vehicles should be capable of running on multiple fuels, specifically diesel and biodiesel in peacetime, and JP8 aviation fuel and kerosene in time of war. The U.S. Marine Corps joined together with Cranfield University (in the United Kingdom) and Hayes Diversified Technologies of Hesperia, California to develop such an engine.

The resulting “diesel” liquid-cooled, single cylinder displaces 584 cc and uses the original Kawasaki main cases and 5-speed transmission but with a new piston and cylinder and the other components necessary for it to run very high compression required when using these multiple fuels. Producing 28 horsepower, it has a top speed of 85 mph. Changes called for by military spec also makes it capable of running in at least two feet of water, and there’s black-out lighting, even an optional infrared headlamp. Handlebars look super tough, and the oversize fuel tank is good for a bit over 400 miles.

2004 production was something over 500 units. Further development of the Hayes-DT bike has resulted in an M2 version of 670 cc which has a top speed of 95 mph. Hayes has run these engines successfully at the Bonneville Salt Flats; top speed of 121.212 was reached! Entered in the Vetter Fuel Challenges, Fred Hayes bike builder and rider, the “streamliner version” won outright with 162 miles per gallon of Diesel fuel. There has been discussion of a civilian version.

Originally on loan from Fred Hayes of Hayes Diversified Technologies, and eventually donated by Kay Hayes, Fred’s widow. You can see this military motorcycle and many others when you visit the National Motorcycle Museum.

Streamlining, the Height of Bicycle Design?Vincent Power, Ducati Handling in a Father and Son Project Scroll to top