Streamlining, the Height of Bicycle Design? 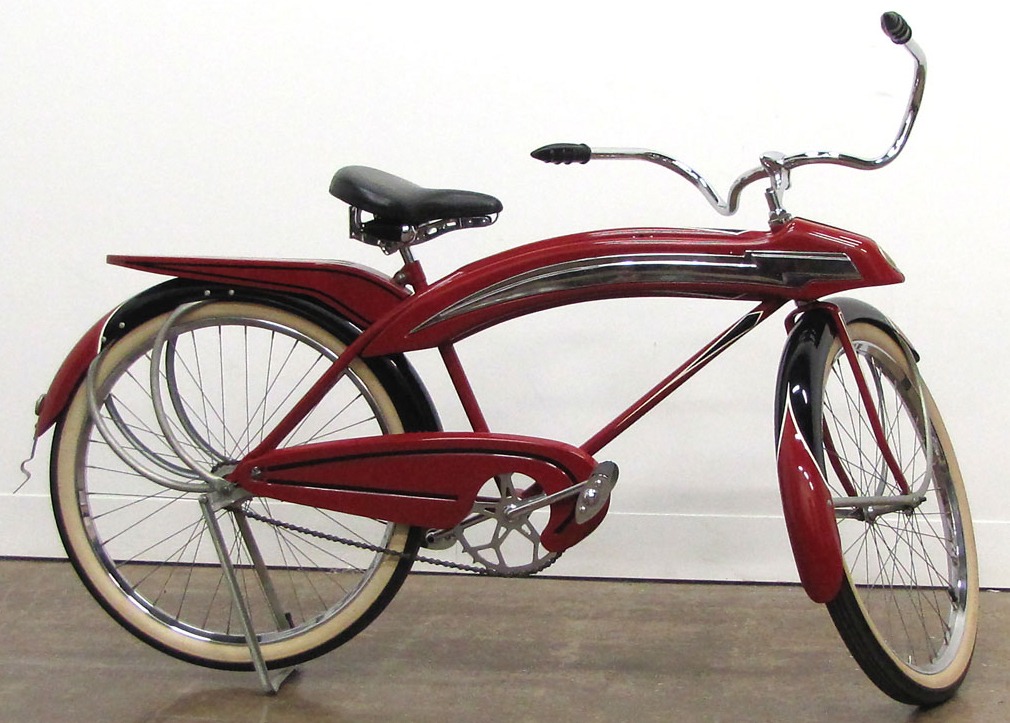 75 Bicycles are on display at the National Motorcycle Museum; Boneshakers, Ordinaries, Safety Bicycles, tricycles, even a few Sting Rays. When you visit the 75 piece bicycle collection at the Museum you’ll see some amazing two-wheelers, some pre-1900. And this week from the collection we bring you a styling masterpiece from 1938.
The Depression was very painful to America and its industries, but by the mid-1930’s things were turning around. And you can look at cars, motorcycles and bicycles and see the reawakening through styling.

With most vehicles, late 1920’s styling was carried through the early 1930’s, the Depression years; car grills were upright, motorcycle fenders were simple radius shapes and there was little integration of components. But stylists then brought us exciting new styling, an integration of tank, seat, fenders, guards, air cleaner shrouds and such by 1935. This 1938 Western Auto Speedline Airflo is a fine, though extreme example.

Imagining the Shelby Cycle designer at his large drawing table working on this bicycle, his pencil was making broad sweeps and his French Curve was working overtime. The “tank”, luggage rack and chain guard flowed into the frame, plated fender braces made smooth sweeps finishing into fender striping. Even the handlebar was an amazing flowing bend terminating in sleek, pointy grips, and the gooseneck is truly a streamlined design. America was back on its vehicle design game, and the three surviving American motorcycle manufacturers, Excelsior, Harley-Davidson and Indian, showed it as well! To be sure, not many kids were lucky enough to have such a ride, but bicycles like this one graced the pages of magazines and lured families into their local Western Auto store where there was something for Tom, Betty and Susan.