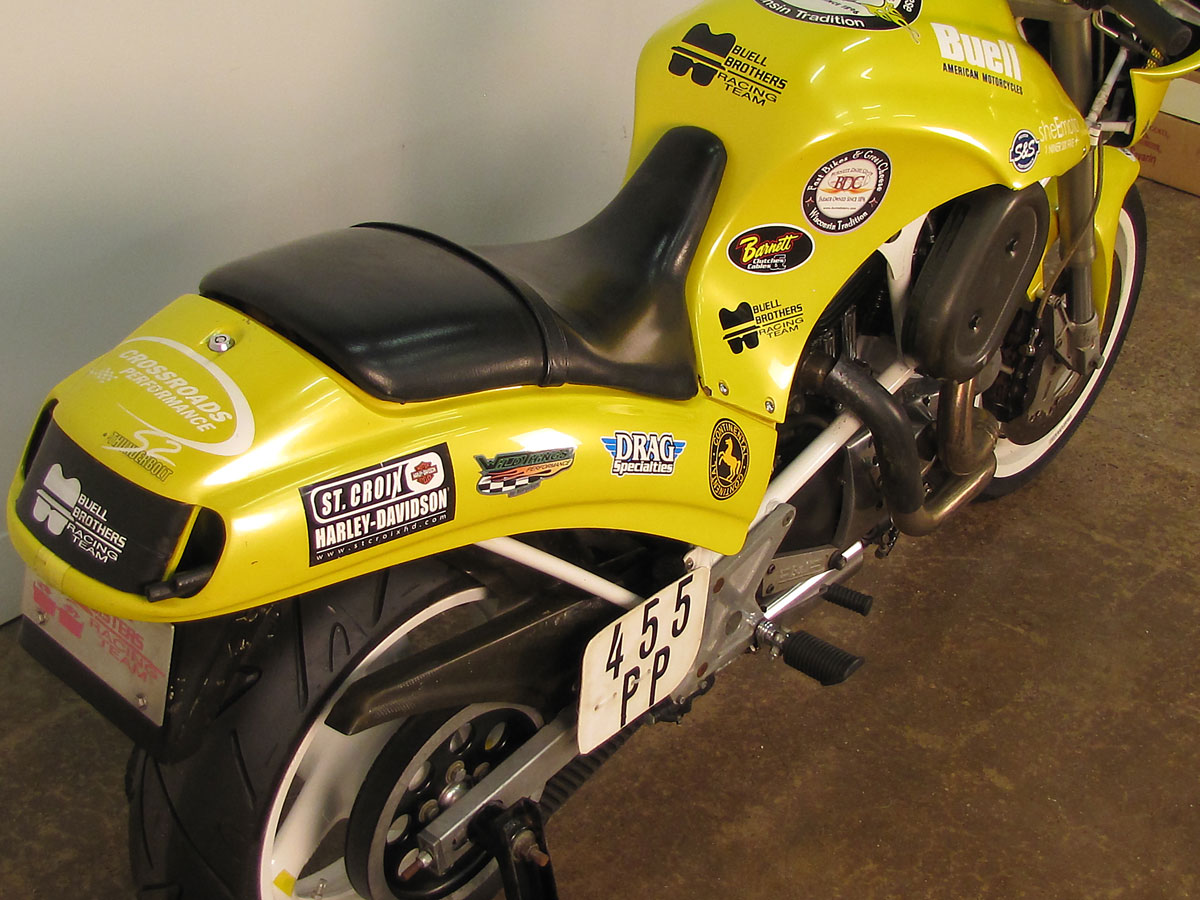 As you may know there are literally hundreds of classes and records to set, and break, in Land Speed Record competition. Stock, totally constructed, open, partially or totally streamlined, all ranges of displacement, supercharged, turbocharged, blended fuel versus pump gasoline start to break down the wide range of classes. And due to the nature of the surfaces and differing elevations, each of the many courses around the world keeps its own unique records.

This 1995 Buell Thunderbolt fits into the “Production” class and runs on gasoline. Its major performance modifications are limited to engine internals. While it is difficult to set any sort of land speed record, it’s even more difficult to set one that stands for any length of time. And in the case of the Buell Brothers (and Sisters) Racing Teams, that is exactly what they did. At Speed Week in 2003, Joe Taylor set a Production Push Rod 1350 Class record of 152.338 mph, and at the BUB Meet in 2012, Erin (Hunter) Sills set a record of 150.936 mph. Both records still stand—a testament to the riders of the machines, their gifted builders and team leader Tom “Santa Claus” Anderson. But Anderson offers, “We could not do it all without our team members. Many have worked with us for 20 years keeping track of tools we have loaned to others, making notes for each run, working on the bike between runs. They are SO valuable to our effort.” By the way, the “training wheels” are an Anderson design. Says Tom, “They are great in the pits, really make it quick and safe to roll the bike around, make some quick fixes, keep it stabile on the salt. But yes, they come off before the runs we make!”

We also spoke with the super-accomplished Erin (Hunter) Sills about her time on the bike in 2012. “I was already running two bikes at the BUB trials, a GSXR and a Ducati 748, so declined Tom’s polite request to ride the Buell. But he persisted, said I was the right person to ride the bike and together we set the record.” We wanted to hear from Erin what it’s like flat out, approaching the timed mile at Bonneville. “It’s a very Zen moment, hard to explain, but I have a rotating checklist in my head; engine RPMs, my body position, am I fully tucked in, hitting shift points and I also have to remember to breathe! And then there’s the little voice that just says trust the bike, the crew and my skills.” Erin also offers, “Key to staying on course for most riders is sighting far into the distance, picking a point on the “floating mountain” and not using the course flags as guidance.” So at Bonneville, you’re just going in a straight line for a few miles, but it’s very complicated!
Specifications:

Plymouth Monster and Bonneville in 1935: One Man’s Dream for the World’s...Streamlining, the Height of Bicycle Design? Scroll to top