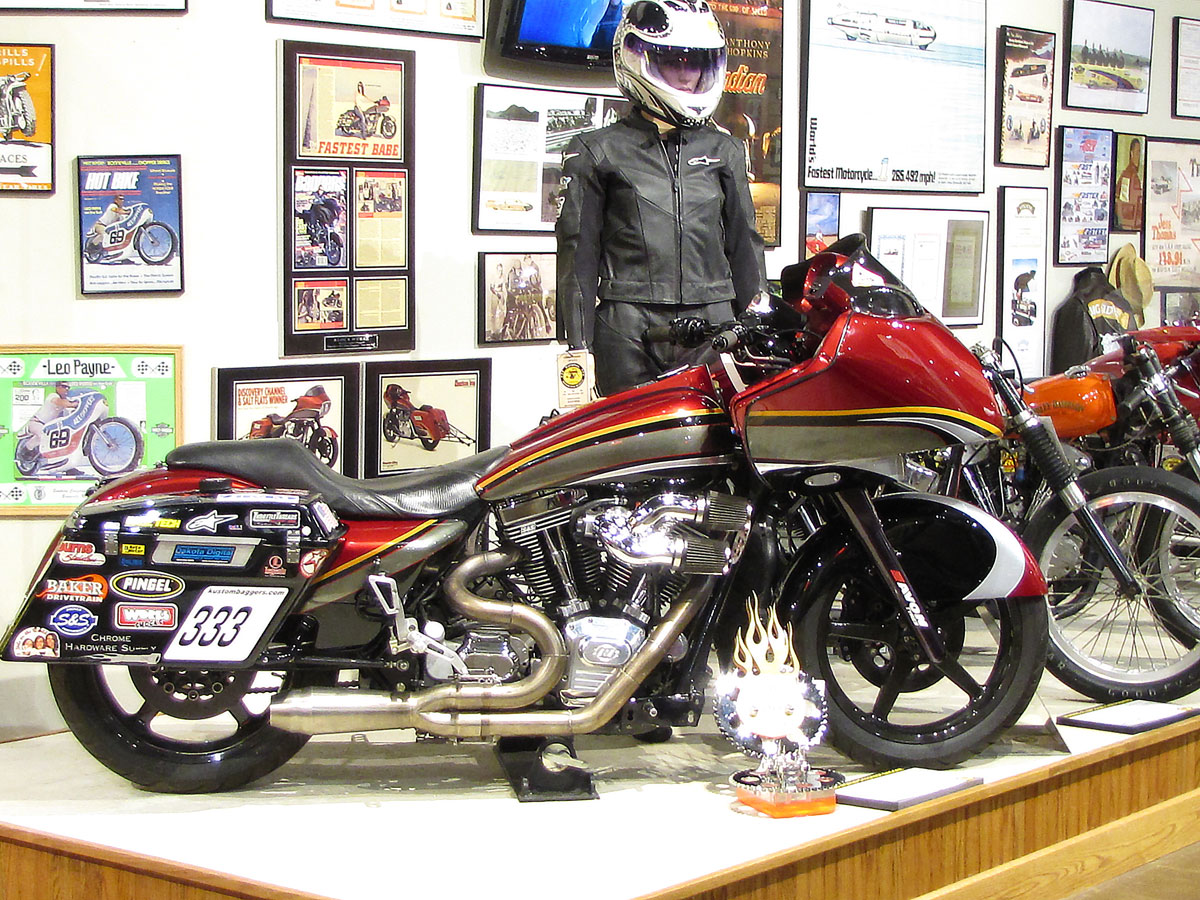 If you visit the National Motorcycle Museum before next May, 2017, chances are you’ll enjoy walking through the Allstate Motorcycle STREAMLINERS exhibit, presented by J&P Cycles. About 18 land speed record motorcycles and some artifacts and labels will help you understand this form of competition. There’s even a 12 page book that shows all the classes, current speed records by class and when they were set. As the exhibit name suggests, there are a few fully streamlined motorcycles, but there are many partially streamlined and stock or open bikes as well. One machine that looks a bit out of place is a nicely painted Harley-Davidson Road Glide, except it’s not a Road Glide at all. It’s a totally custom built bagger with a fairing, and it has set land speed records at Bonneville Salt Flats!
In 2006, the team at Klock Werks Kustom Cycles competed in the Discovery Channel’s prestigious “Biker Build-Off”. But the bike was a lot more than nicely painted, detailed and good looking. And not only did the bike win the Biker Build-Off competition, but this, the first “competition” (racing) bagger, would go on to become the “World’s Fastest Bagger”. At the BUB Speed Trials, competing in the MPS-PG-2000 class, Laura Klock set records in 2006, 2007, and 2008, ultimately reaching 161 mph. Turns out this machine, built around a Rolling Thunder frame with 124 cubic inches of S&S Cycles power and trick carbon fiber wheels is far more than good looking. Since the Klock Werks Kustom Cycles bike set its records, high-performance baggers have become very popular–and we have the people of Klock Werks Kustom Cycles to thank for it.
Specifications:
On Loan to the National Motorcycle Museum by Klock Werks Kustom Cycles, South Dakota
PreviousNext
1234567891011121314151617
0 replies

1931 Henderson Special, the Pinnacle of Henderson DesignHow Many Survive? Scroll to top