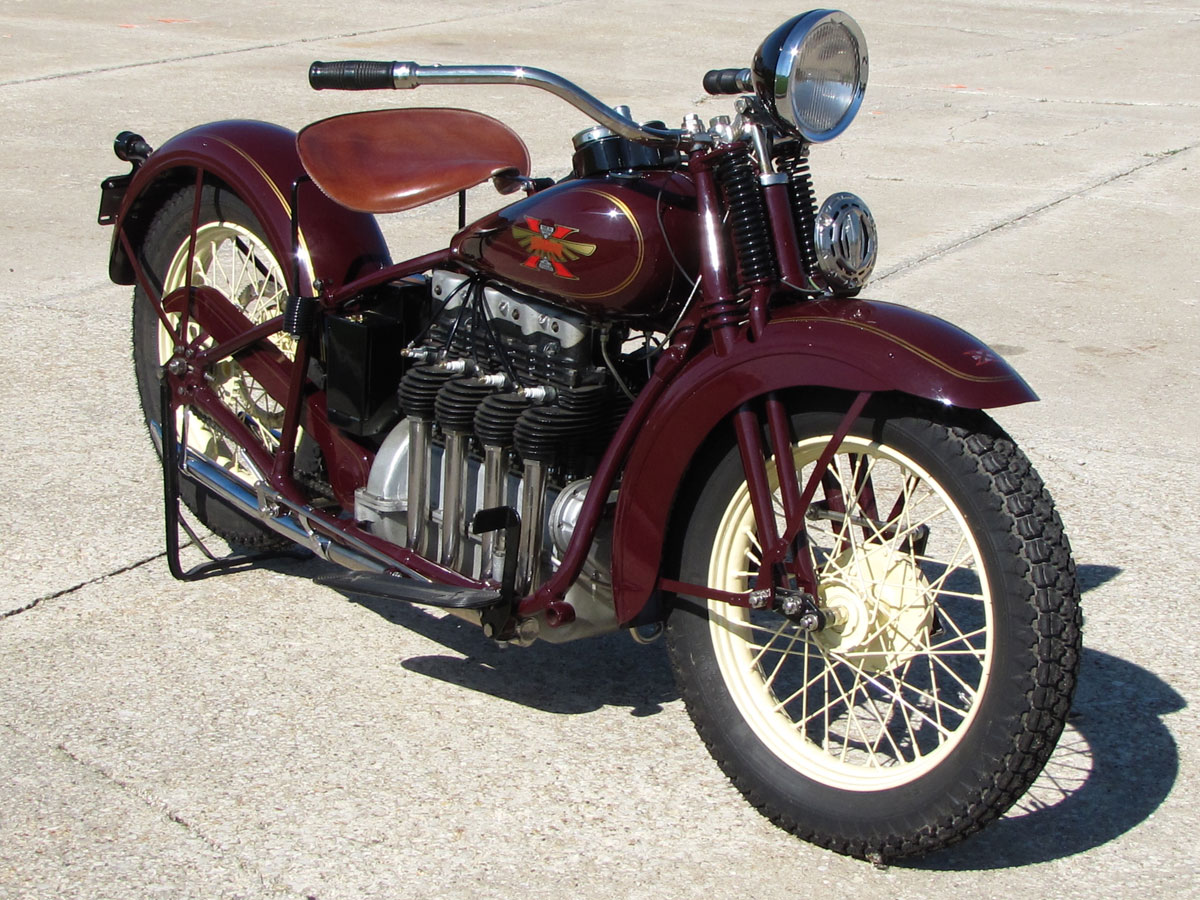 While the V-Twin engine layout was most popular among the big American motorcycle manufactures, a good number also designed and built in-line fours.

In a sense the OHV French designs from FN as early as 1905 were examples to follow, though American Fours were larger, heavyweight flagship road machines for the most part. Harley-Davidson never went this route, but Indian, Pierce, Cleveland, Henderson and Ace made smooth running well appointed and fast four cylinder machines. Similar in layout to other chain final drive in-line designs, the Henderson Four hit in 1912. Proving its worth and durability, Carl Stevens Clancy rode ’round the world in 1913 on a machine similar to the one on display in the Best of the Best gallery at the National Motorcycle Museum.

Right next to that fantastic, original 1912 Henderson, safely stowed in a big glass showcase, is the last, and the best, from Henderson, Rich Schultz’s** fully restored AMCA Winner’s Circle-judged 1931 Henderson “Special,” also known as a KL. This solo machine used special tuning parts to make it Henderson’s fastest machine to date. Joe Petrali set a record on a Chicago street of 112.61 miles per hour, an average for a two-way run. Higher compression, a hotter camshaft, different cylinders, a bigger carb and valves, had the KL rated at 45 horsepower, twice the power of the average big twin of the era.

So when you visit the National Motorcycle Museum next time, you can view these bookends of Henderson design, the ’12 Four the first, the ’31 Special marking the end. About this time Ignatz Schwinn looked at a Depression ravaged America and decided to cease motorcycle production to focus on bicycles, more useful and practical than his expensive luxury motorcycles.

Indian’s last four, and America’s last for awhile, was around 16 model years until 1942. The return of the mass-produced four cylinder motorcycle came in 1969 when Honda brought out the CB750. Soon most Japanese manufacturers followed making in-line fours from 250cc’s all the way up to 1300cc’s and larger. The transverse four became the universal Japanese motorcycle.

Like many motorcycles at the National Motorcycle Museum, Richard Schultz’s Henderson Special is on loan for just a few months, possibly through winter. Make plans to stop by and see it, before Rich takes it back home.

**Richard Schultz is a noted authority on the Henderson motorcycle. Rich has published a thorough treatise on the history of the machine entitled, Henderson – Those Elegant Machines which is available in the Museum Store.