An old Chopper that’s part of the family.

The Allstate Motorcycle CHOPPER STORY exhibit runs through May 2017, and we have a couple of new additions to the exhibit for pre-1980 customs, one of them, Dick Gilmore’s Panhead, is our featured bike this week. 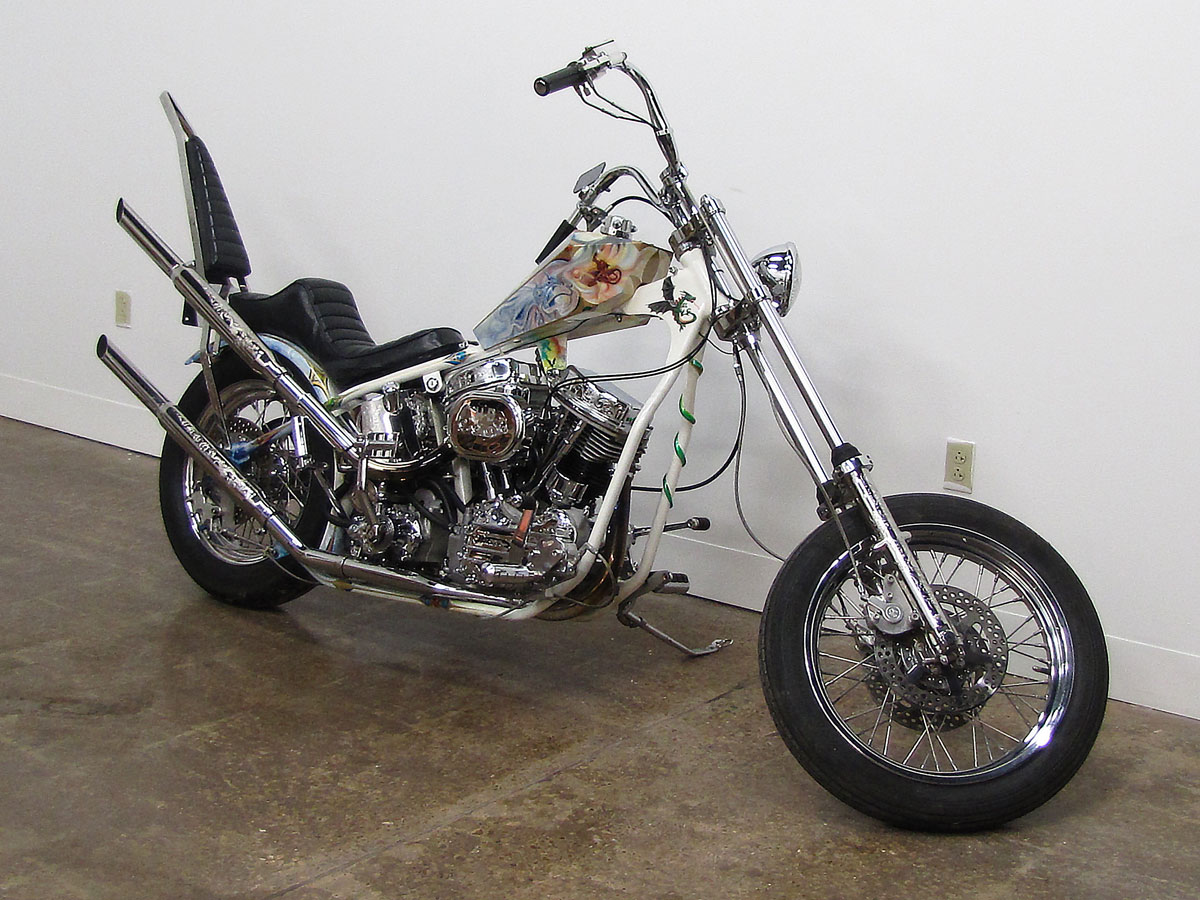 With a 55+ year history, this old Harley Panhead, as we call them these days, has had just a few owners. But in its building and rebuilding, it has had many other hands on it. For about ten years it was ridden as a pretty much stock FLH touring bike by Iowa resident Chopper Charlie (Gilmore) who bought it used while he was in the army, stationed at Fort Benning. When brother Dick Gilmore acquired it in 1971, he rode it as-bought for a year, then began chopping it, working with the original owner who was just back from serving in Viet Nam.

Gilmore offers, “Since purchasing it, the bike has been rebuilt five times. Four times have been because I wanted to change it. The last time it was rebuilt because of a car making a left-hand turn in front of me.” Gilmore’s passion and lifelong pursuit has been educating emergency medical personnel related to crash scene procedures; what to do, what not to do when a motorcyclist is injured in a traffic accident or collision. Over the years there was a point when Slider needed cash, sold the chopper, bought it back a few years later.

The molding and paint, which was done by Vilio, really brings you in. The theme and detail are incredible; makes you wonder what previous paint jobs offered. In its current form, CCI supplied the bars, fenders, and primary cover, Kuryakyn the pegs, Performance Machine the brakes. Jerry Potts did the engraving, Warren Custom Plating, the chrome. The engine was balanced, blueprinted and ported by Chrome Horse, the bike shop owned by brother Tator Gilmore. This most recent rebuild was done in 1990 and the bike was featured in Easy Riders in November of 1992.

“The chopper isn’t just a bike to me. It is a story of part of my life from 1971 to the present. “Chopper”, “Skinny”, “Dewey”, Shawn, “Tator” Gilmore and many others (built and rebuilt it) through the years.”
Specifications:

On Loan to the National Motorcycle Museum by Dick ‘Slider’ Gilmore, Iowa