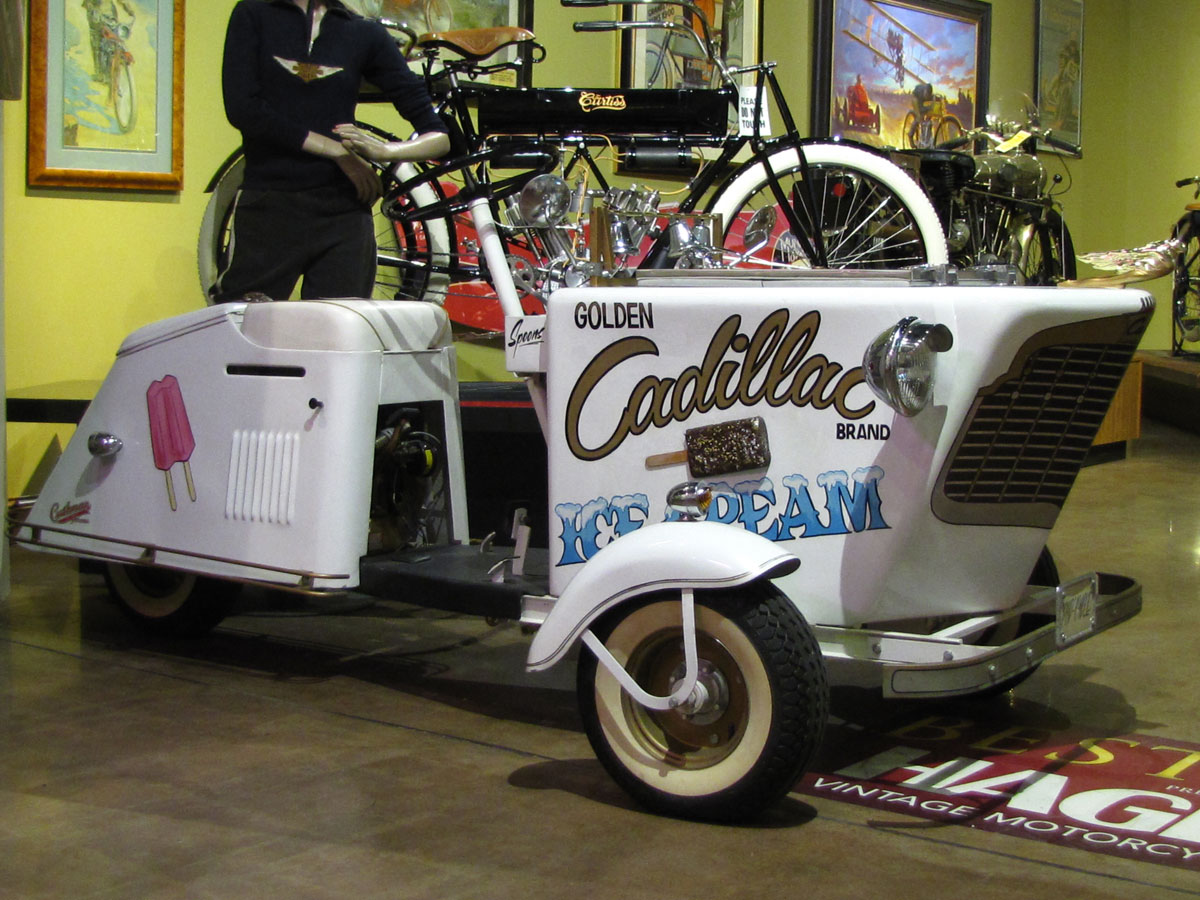 “If only that motorcycle could talk,” is a thought not uncommon among enthusiasts for old motorcycles and cars. In a way sometimes they can in that sometimes their owners are still around, able to explain a few things as with the Cushman Scooter pictured here. Museum President John Parham discovered the Cushman would be up for sale at Mid-America, now Mecum, Auctions in Las Vegas a couple of years ago and successfully bid to buy it. Cushman built these Model 39 three-wheeled chassis and offered a number of carry-all boxes up front. The U.S. Government even used them for local deliveries. We caught up with the man who custom built this machine, Gerry Williams, and got the story.

“After World War II when I was growing up in a small Missouri town, I always had a passion for Cushman scooters and Whizzer motor bikes. The problem was there was no money to buy  either one.

“Occasionally,  we made a  trip to the larger city of Springfield, Missouri to buy  supplies. One day I saw a three-wheel Cushman scooter with a box on front with ice cream for sale for five cents.  My imagination  went wild. Just think! Riding around all day on a Cushman scooter and making money, too!

“The dream I had as a 16 year old always stuck in my mind. Some 50 years later, I had chance to buy a 39 Series Cushman Package Car. It didn’t have a front box.  This  was what I needed to make that old “Golden” dream come true. The new ice cream box needed style, could not be just a square box. It had be the “Cadillac” of ice cream scooters! So the frame of the box was welded up from 2″ exhaust pipe and skinned with metal with a nice point on the front. This gave the rounded corners and room for insulation between the 2″ pipe frame.

“Since it was my dream to have the “Cadillac” of ice cream scooters, I decided on the name “Golden Cadillac Ice Cream”. The decorative ice cream bars were carved from Styrofoam, painted and glued on. I knew a great pin stripe and sign guy. He put the finishing touches on the Golden Cadillac scooter”.

The Cushman Golden Cadillac Ice Cream Scooter is one of over 450 motorcycles and scooters on display at the National Motorcycle Museum in Anamosa, Iowa. You can see them all next time you visit.