Looking through the 120+ year history of motorcycle design, with hundreds of different brands, probably thousands of unique offerings, you’d think everyone could find what they want. But unsatisfied, some riders still feel the need to venture into custom bike building. William “Wild Bill” Gelbke was one of those who needed more, bigger and different in his personal ride.
Much like Friedl Munch, designer of the Munch Mammoth,  Bill went outside motorcycling for his engine. From 1966 to 1973, Munch used a range of four cylinder NSU car engines. Gelbke employed a four cylnder Chevrolet II car engine, its PowerGlide transmission and a cut down Chevy truck differential moving power to a chain driving a wide rear wheel. 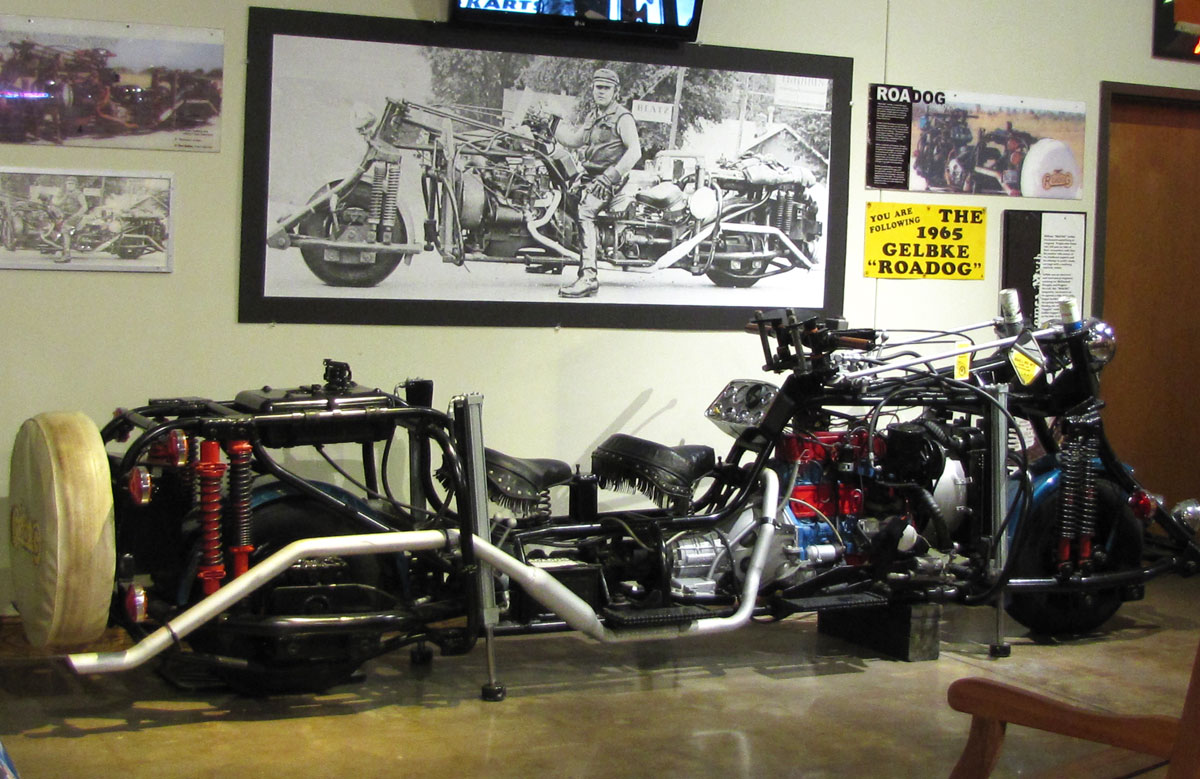 Standing next to RoaDog, permanently on display at the National Motorcycle Museum you may sense Gelbke was schooled in engineering, but he also worked at McDonnell Douglas in California. Needing outlets for his motorcycle building passion, he also had bike shops in Illinois and Indiana. Taking all he was worth, the restless inventor sought to build a dependable, long distance cruiser, even start production on them.
Probably not finding any available component up to the task, Gelbke designed his own massive leading link, or “Earles” type fork, similar to those on Greeves and BMW motorcycles. His aviation experience lead Bill to use chrome moly steel tubing for the very long frame which is nicely bent and welded. (Just imagine laying out the components, frame pieces and building this in your shop.)
Gelbke is said to have racked up 20,000 miles in the first year RoaDog was on the road, and given the lack of high tech we see  in today’s bikes, teething issues were few. Then, with Gelbke’s death due to a domestic dispute, RoaDog went into hiding.
Buzz Walneck, publisher and swap meet promoter, knew of the bike from its early days and went on a hunt to locate it, asking his readers for tips. RoaDog, it turned out was with Gelbke’s mother, safe in a garage. Up for a challenge, Buzz bought RoaDog, made the machine roadworthy and set about learning to ride it, which is captured in a video. Buzz refreshed us all on what its like to ride it using four hydraulic jack/stands, and planning turns around its 17 foot length, limited steering lock and shear mass; RoaDog is reported to weigh almost 3300 pounds, more than the entire car its engine came from!
As did Munch, Gelbke wanted a fast, comfortable touring bike, able to take him great distances. Munch went into limited production and today his interesting machines, using almost entirely designed to purpose components, are highly sought after. Gelbke made a few versions of his design, each more refined than the last but never realized his dream. But we can appreciate the man and his machines when we walk the length of RoaDog noting his use of available components combining them in an interesting way using his engineering and fabrication skills. Colorful, creative and ambitious describe this man who was also, no doubt, one highly skilled rider!
If you’d like a copy of Buzz Walneck’s detailed book about RoaDog, “WildBill” Gelbke, the Museum Store has a copy ready for you.
PreviousNext
1234567891011121314151617181920212223242526272829303132
14 replies