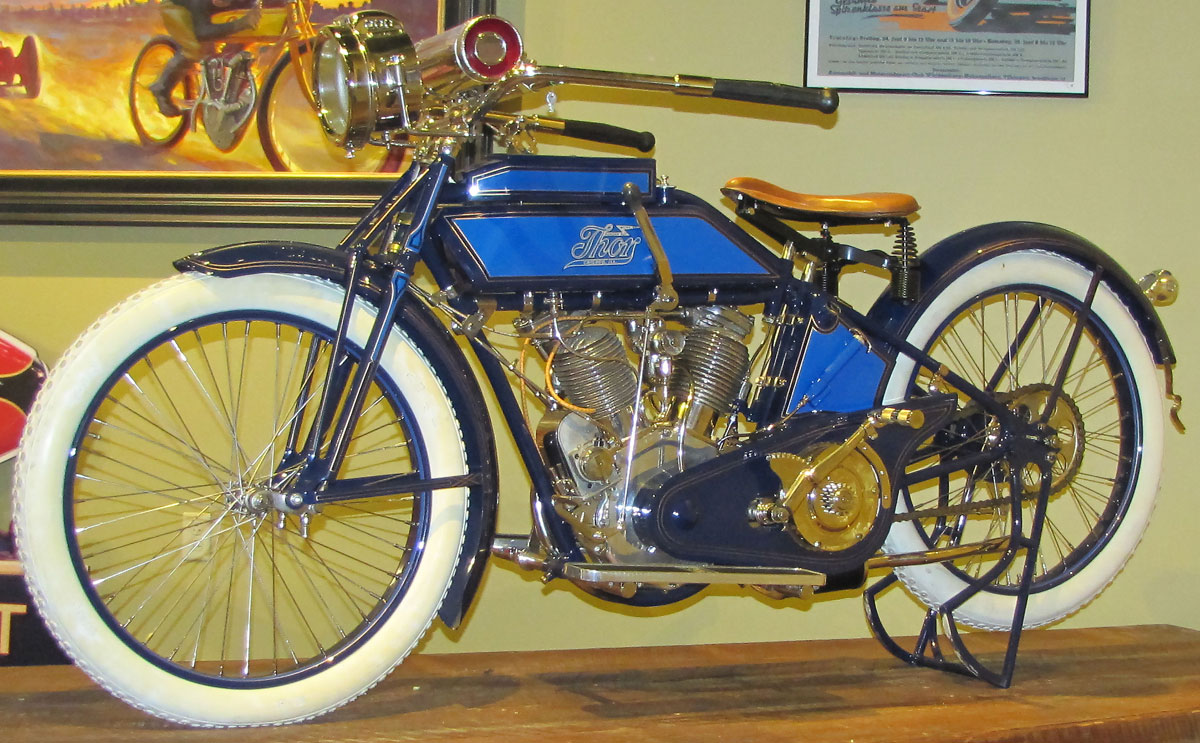 Aurora Machine and Tool Company was a huge manufacturer based near Chicago. On contract, they built Indian’s first Oscar Hedstrom-designed engine for the 1901 Indian “Camelback” but soon made their own complete motorcycles.

This 1916 Thor represents the pinnacle of Thor motorcycles and when you visit the Best of the Best gallery in the National Motorcycle Museum you’ll see this fine Model U. While Harley stuck to a 45 degree V-twin, Indian a 42 degree twin, Thor went with a 61, then 72 cubic inch 50 degree V-twin design. Thors were constantly upgraded, improved over time. This final model is also the first Thor with a three speed transmission. The lightning bolt in the Thor logo represents Thor, the Norse God of Thunder. By 1920 Aurora decided to cease manufacture of motorcycles and focus on making power tools, appliances and supplying parts and assemblies to other manufacturers.

Though very rare, in earlier years Thor made small batches of board track and dirt track racers. Excelsior and Indian were alongside Thor and other brands who saw promotional advantage in racing, as well as an opportunity to test durability of new designs. Even before 1910, when board track racing began, Thor was serious enough to launch a racing team with Paul “Dangerous” Derkum as its prime rider.

After many years in the late 19th Century of making bicycle components, Aurora moved to making Thor motorcycles. But their bigger output was still the supply of motorcycle components and castings to Merkel, Reading Standard, Henderson, even Harley-Davidson. Aurora even supplied complete engines to Indian in the early years. If you look behind the motorcycle industry today, you will see a lot of “outside suppliers” making parts, castings and complete components to order for various motorcycle brands. Ducati, for example, designs complete motorcycles, makes their own engines but sources suspension, wheels, brakes, exhaust systems, bodywork, frames and electrics from a huge pool of makers in Italy, some now used by BMW and even Indian as well.