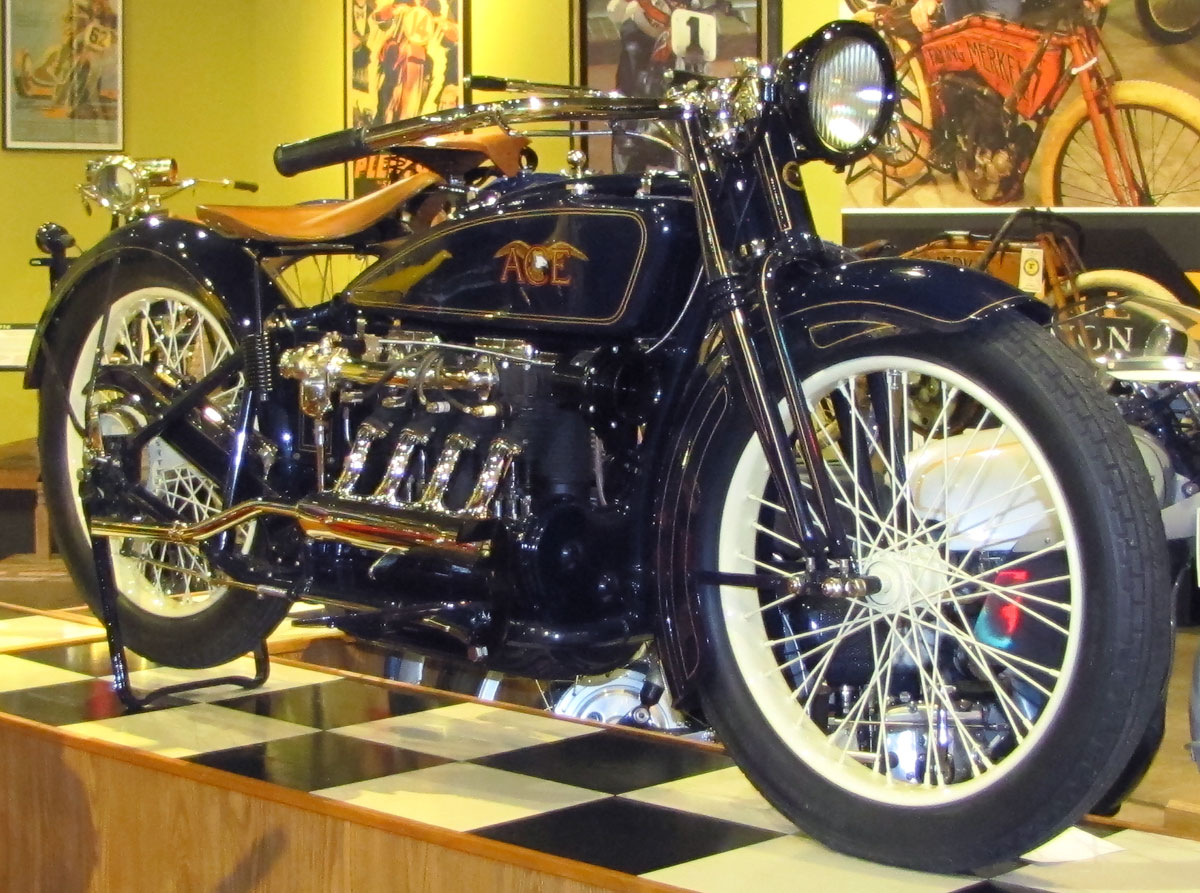 On loan by a collector who lives not far from the National Motorcycle Museum, and now on display in the Best of the Best gallery, is a perfectly restored 1923 Ace Four.
The Ace motorcycle was an outgrowth of the work of Thomas and William Henderson. The Henderson brothers are credited with a motorcycle and engine design that influenced American-made Fours for several decades. The Henderson, the ACE and the Indian Four are all related to the original work of the Henderson brothers.

The Henderson brothers’ first motorcycles, possibly the finest made in America to that date, arrived about 1912; one model of in-line four. By 1917, the brothers sold their design to Ignatz Schwinn, famed bicycle builder and owner of the Excelsior Motor Manufacturing and Supply Company in Chicago. William Henderson was to work for Schwinn for five years, making the ownership transition smooth, but that job did not last so William was secretly back at creating his next motorcycle. Honoring his two year non-compete clause, Henderson, contractually no longer permitted to use his name on a motorcycle, was working on his next four cylinder in Philadelphia, the Ace. In his heart, it had to beat his original design, yet now nemesis, the Henderson from Exclesior. In that era Indian, Henderson and Ace vied for prestige in numerous competition events, hillclimbs and cross country runs. Cannonball Baker, Indian’s rider, was hard to beat! Ultimately, prime bragging rights came in the form of a top speed record set in 1923 by ACE XP-4 rider Red Wolverton at 129.61 mph.

Like most American motorcycle engines of the time, the ACE is an “F-Head” design in which the inlet valve is in the cylinder head, the exhaust valve is in the block, directly below it. In theory the cool incoming fuel charge and the cooler inlet valve helped keep the heat level lower in the exhaust valve directly below. Motorcycle engines did not have the luxury of liquid cooling found in Ford faltheads. As metallurgy improved, and valves and their seats became tougher, the typical air-cooled  side-valve engine could be made to work.

The beginning of tougher times for Ace began when William Henderson was killed in a motorcycle accident late in 1922. The following season riders Wolverton and Terpening competed in the Eastern States Championship Hillclimbs with Wolverton winning. But though the Ace was beautiful, and the fastest in its time, manufacturing luxury motorcycles at a profit proved difficult; the Ace name lasted from 1920 to 1927. By 1926, running a loss, the Ace design, name, parts and tooling were sold ultimately to Indian Motorcycle Company in Springfield, Massachusetts. Before blending the Ace into their product line, Indian sold Ace motorcycles, and the work of William and Thomas Henderson continued to have impact in what is probably the most refined of American four cylinder motorcycles through 1942. With the exception of a few small startups, the four cylinder design has not played a role in American motorcycle manufacture since that time.

We are grateful to Tom Pribyl for loaning this fine machine for display at the National Motorcycle Museum.