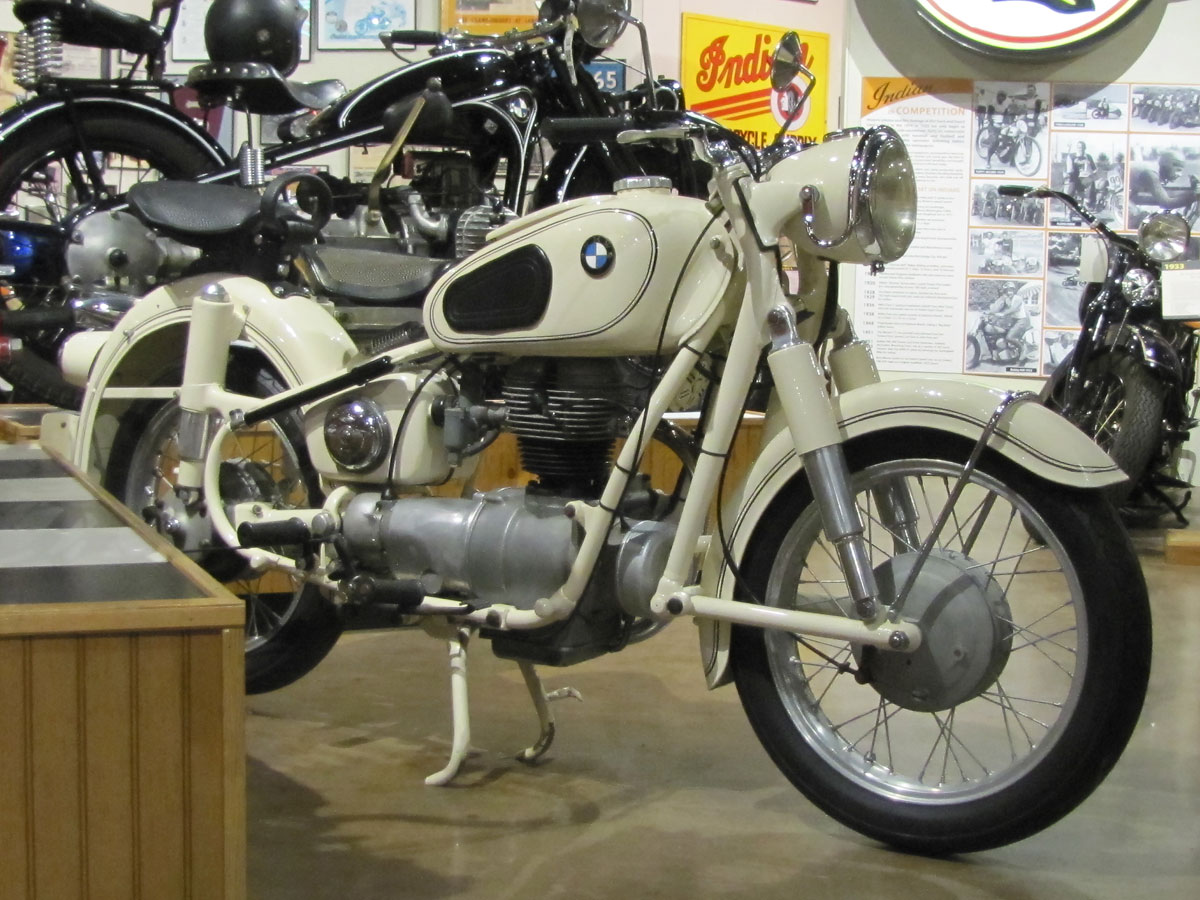 Unusual for its creamy white paint, the next time you visit the National Motorcycle Museum, you’ll probably see this 1954 BMW R25. Among other European bikes on loan as part of the collection of over 400 motorcycles at the Museum, it’s a standout.

With Max Friz as chief engineer, BMW was originally an aircraft and industrial engine manufacturer. They also supplied some opposed twin, or “boxer” engines to motorcycle makers starting in 1921. With the Model R32 in 1923 they began to make their own motorcycles which logically put the cylinders out in the breeze as with their aircraft engine design. This “in line” layout of the crankshaft also worked well with shaft drive as power did not have to be turned 90 degrees until it was at the back wheel. The R24 single was the first motorcycle BMW was permitted to manufacture after World War II with the ending the Potsdam Agreement in 1948.

Much like Vincent and their single and twin-cylinder models, BMW chassis components, features and overall build quality of the 250’s were nearly identical to their 500cc and 600 cc twins. The next model of BMW single arrived in 1956, the R26. In 1960, the R27. Its design incorporated BMW’s only rubber mounted engine to date. The newer R27, at 18 horsepower had three more than the R25 and R26. From the beginning, BMWs have been shaft drive, though some more recent models also use toothed Gilmer-style belts on pulleys, other models roller chains in their final drive. Note that BMW did not invent shaft drive for motorcycles. It shows up on many earlier motorcycles including the 1912 Pierce, also on display at the Museum.

Our thanks to Wanda Schumacher of the Blackhawk Antique Motorcycle Club for putting her fine BMW R25 on display at the National Motorcycle Museum.

The "Six Inch Stretch" Hi-Rider; An Apex of Chopper Development