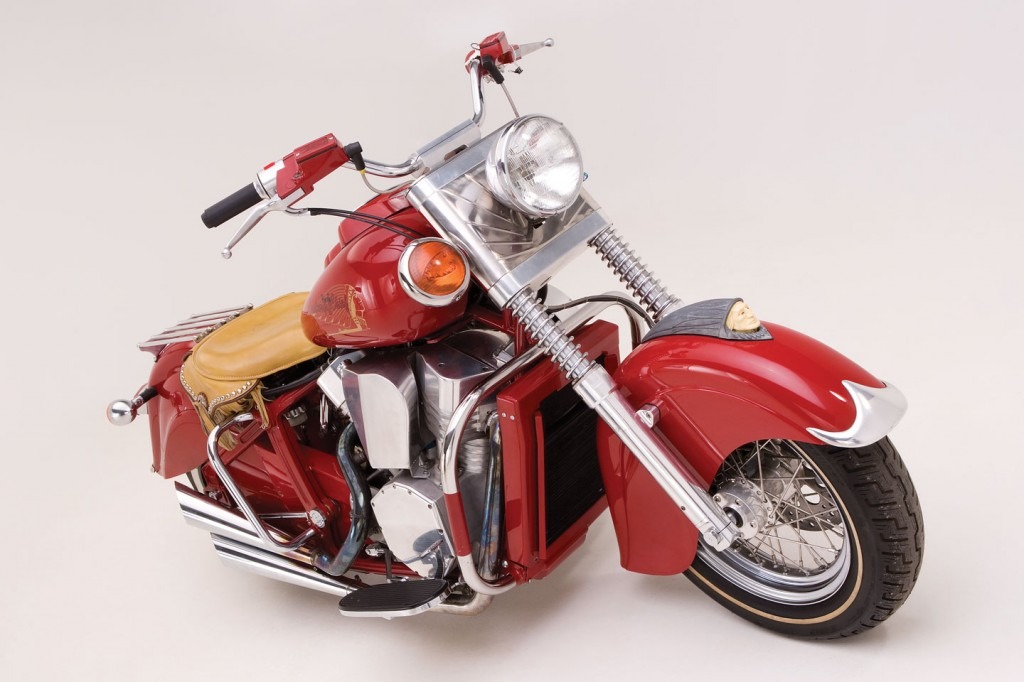 If you were reading motorcycle magazines back in the 1990’s, before the internet was widespread, you may have read of a couple of efforts to “revive” the Indian motorcycle. In that timeframe, Triumph and Henderson came back as well, though like the Indian revival efforts, there was no relationship to the original owners of the Henderson or Triumph brands. These entrepreneurs felt it better to start a motorcycle company using a known brand name and styling cues, rather than starting from scratch as did Hesketh, Britten, Buell and others.

Wayne Baughman was an industrious guy who, about 1994 decided he should make the next great American motorcycle. He wanted it to look like an Indian, but employ current technology. And he skirted getting rights to the Indian trademark, just made his bikes look like classic Chiefs. As his story developed, Baughman also claimed he would be strong competition for Harley-Davidson, the sole surviving American motorcycle brand, promising to manufacture as many as 100,000 Century Chiefs a year. And this was in a time when even the well established Harley-Davidson was selling only a little over 100,000 units, making $1.1 Billion dollars in motorcycle sales alone, and another $1M in licensed apparel, etc. Baughman was making a very optimistic promise to investors, dealers, and motorcycle enthusiasts.


The industrious Baughman gathered the press, showed his running prototype, and got plenty of ink in magazines world-wide. And his timing was pretty good as baby boomers were nearing 50, had disposable income and were maybe jonesing for something more interesting than a Gold Wing or BMW, and looking for an alternative to Harley-Davidsons. But after about 10 years ownership by Vaughn Beals and Willie G along with other “real” motorcycle guys, Harley-Davidsons were back to being very good motorcycles and would be tough competition for Wayne Baughman’s plan to steal or build market share.
Baughman promised a lot to journalists, readers and motorcycle dealers. But in the end he did not get beyond a couple of prototypes and many would say a lot of smoke and mirrors. While borrowing a lot from the classic 1950’s Chief, the new Century Chiefs had a bright and seriously edgy billet look where smoother classic castings would have been more pleasing. And the bikes lacked the Indian moniker on the fuel tank; Baughman avoided the hassle of getting Indian trademark rights.
In the end Baughman failed to deliver. He was very under-capitalized and had not established a dealer network, also failings of the Hanlon brothers and their new and short lived “Henderson” just a few years later. In the end, one Baughman Century Chief prototype disappeared with the dissolving of the California Motorcycle Company and their liquidation around 2003. The other is in perfect condition and is on display in the National Motorcycle Museum. Rarely has one motorcycle had so much to say!

The next chapter in the Indian story began about 1998 in Gilroy California with the newly formed Indian Motorcycle Company of America. This group was awarded the Indian trademark rights by a Colorado court in 1998. Though several thousand motorcycles were manufactured and sold, technical problems, distribution, the use of a typical S&S engine and the lack of true Indian uniqueness conspired to cause production to end in 2003.

But the power of the Indian trademark, its heritage, the motorcycle styling image it brings up in tens of thousands of people world wide, caused the British firm, Stellican to again work for its revival. Of all the attempts since 1953, Stellican’s was the most impressive and first offered motorcycles in 2006. The designers played the classic Chief styling very well, used their own engine, dressed the machines with plenty of tasteful chrome. Though expensive, they sold fairly well, and were technically very good motorcycles.
Someday we may learn just how long Polaris Industries was interested in the Indian trademark. They began selling Victories in 1998 so must have been watching Baughman, the Gilroy Indian concern and Stellican’s efforts, perhaps waiting for the right moment. Clear ownership of the trademark was a concern. It’s also been noted that each successive owner of the Indian trademark might be subject to liability lawsuits and warranty claims related to motorcycles they had no part in manufacturing! There is no doubt Polaris has worked hard for trademark rights and continues to. Much like Harley-Davidson has been judiciously following mandates of the United States Patent and Trademark Office to protect their marque, we now see Polaris doing the same with Indian. Small concerns that have made a wide range of parts, accessories and apparel over the years are now subject to scrutiny. Some will sign up with Polaris as official licensees, some will stop making product displaying the Indian trademark.
Most agree the Indian trademark is finally in the hands of a company that will continue to make new Indians that pay tribute to the original legendary machines. Some suspect they will also show us what Indians would have looked like had there not been a 50+ year design hiatus; Indian sport bikes, adventure touring machines, a new Scout, three-wheelers, sidecars. What does the future hold for Indian and all of us who revere the brand?