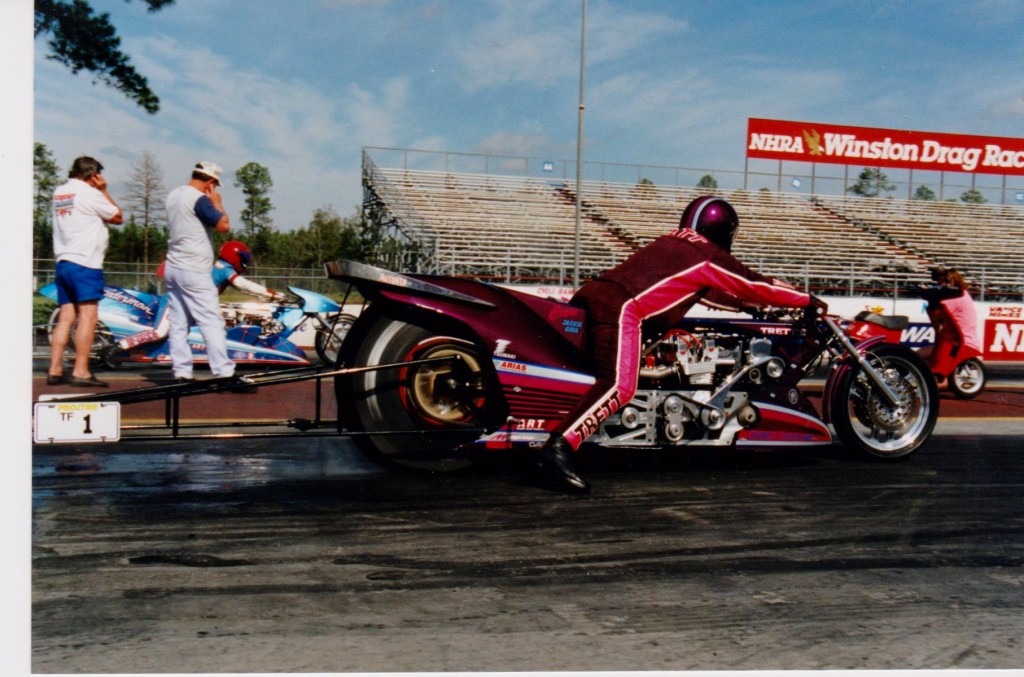 Among a dozen or so drag bikes at the National Motorcycle Museum, from various eras, is Elmer Trett’s finest work in gleaming candy purple, Mountain Magic. It’s the culmination of all he learned while drag racing from the late 1960’s in Kentucky, to campaigning Mountain Magic on the national Top Fuel circuit the year he lost his life in 1996 at the age of 53.
Trett did not limit his work, his passion for drag racing to building fast bikes and riding them. He was also a tireless promoter of drag racing, especially Top Fuel. He built bikes for other racers and encouraged people to move up to Top Fuel as he felt that’s what would keep motorcycle drag racing strong as a spectator sport.
Trett’s personal entry into Top Fuel was a double engine Sportster he first campaigned in 1976. Successful with the machine, Trett won his first championship with the then popular DRAGBIKE racing organization. Trends were shifting to lighter single engine bikes and Trett received support from Harley-Davidson Motor Company to build a new Sportster based machine, supercharged and running on nitromethane fuel. With Harley’s rough times in this era, and cutbacks, Trett was soon forced to look elsewhere and moved to Kawasaki for his engines, and Mountain Magic came together.
Trett’s performances, the thresholds of speed he was first to attain are remarkable and will be what stay in enthusiasts’ minds, along with his knocking on the door of a five second quarter mile. Elmer Trett was first to exceed 200mph, 210 mph, 230 mph; he was always at the cutting edge of engine performance, chassis design and traction engineering, to say nothing of having fantastic reflexes and riding skills. Another thing that Trett will be remembered for is that his family didn’t just participate in the sport, they were his team. Wife Jackie, daughters Gina and Kelly maintained the bikes and were his pit crew.
When you next visit the National Motorcycle Museum, spend a few minutes in front of Mountain Magic, Elmer Trett’s finest work. Think about what it’s like to move through a quarter mile in just over five seconds, from a standing start.