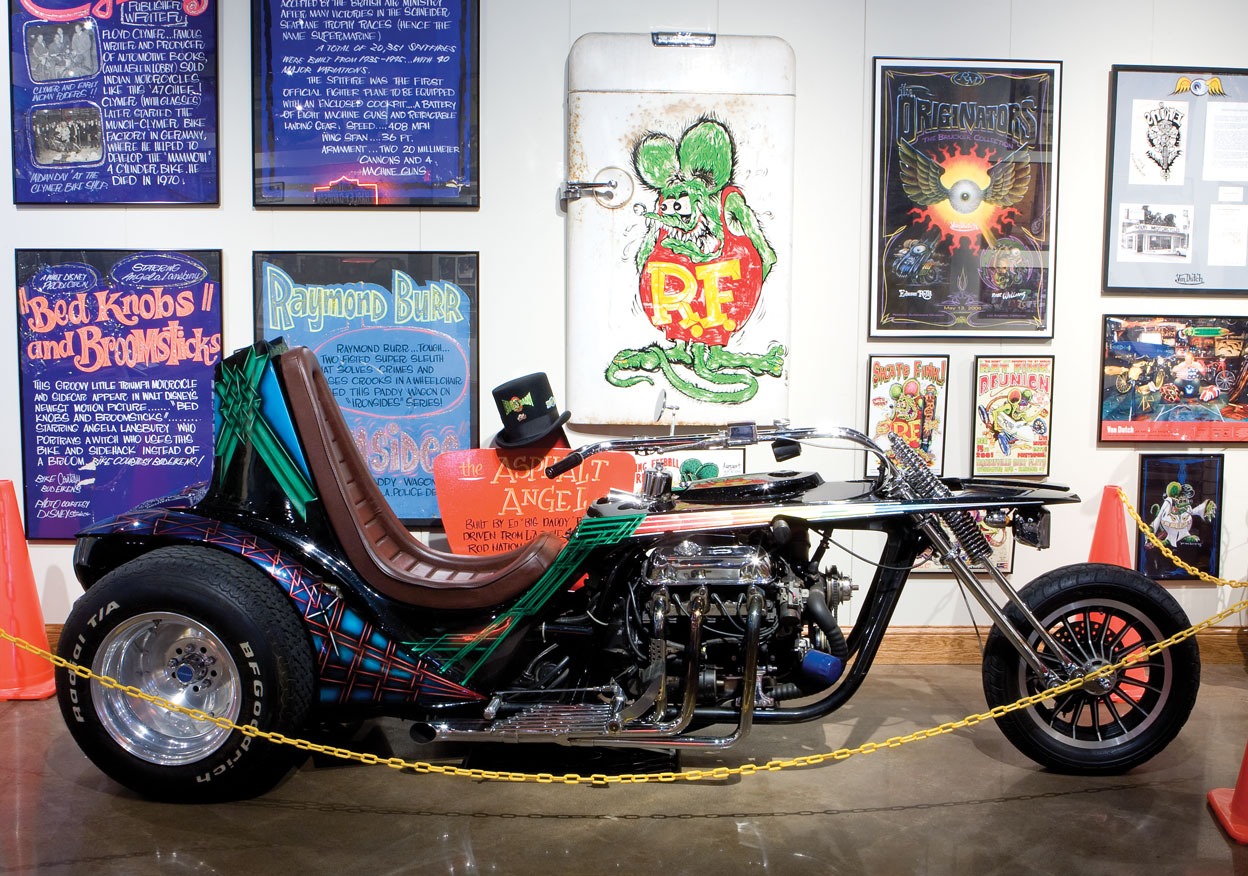 The impact that Ed Roth had on people with any gear head tendencies back in the 1960’s is probably immeasurable, but it must be huge. Impressionable, we picked up car and motorcycle magazines at the newsstand, or saw Roth’s work on the shelves of hobby shops in our home towns, Revell plastic model kits to build. Maybe we were lucky enough that our dads or big brothers took us to a car show where we saw Beatnik Bandit or any of his made-from-scratch two, three and four wheel creations. If you got to watch him air-brushing t-shirts you probably met Rat Fink, his scary but lovable green beast.
You might call his impression on us mind expanding; Ed Roth knew no limits to what fun transportation could look like, or how long a motorcycle fork or sissy bar could be. People were already removing fenders from bikes and old Ford roadsters and coupes, but Roth showed us far wilder machines. He mastered the torch, hammer and dollies as well as molding fiberglass into shapes there were no prototypes for. Cardboard, styrofoam and wood helped him form his sculptures, refinement of the shapes led to final molds. A trip to the junkyard inspired as well, and offered the powerplant and axles, maybe a steering wheel. Metalflake paint and outrageous combinations of transparent paint and wild pin-striping and upholstery, finished off his work. But there were also extreme wheel and tire setups.
Everywhere Big Daddy went he attracted attention because he was so “out there,” taught us by example there are no rules when you are building custom bikes and cars. In fact, the overall message was that being different or weird was okay, and being a Fink or a Weirdo was cool. It was a lesson some of us never forgot, probably benefitted from. When you visit the National Motorcycle Museum you can see Ed “Big Daddy” Roth’s creativity in his Buick powered three-wheeler, Asphalt Angel and numerous pieces of original artwork and even a period film being screened. He was gone in 2001, but will never be forgotten.
https://nationalmcmuseum.org/wp-content/uploads/2014/09/Ed-Roth.jpg 876 1248 wedadmin https://nationalmcmuseum.org/wp-content/uploads/2018/04/NMM-LOGO-500x386.png wedadmin2014-09-29 13:47:342018-09-26 15:43:50Featured Motorcyclist: Ed "Big Daddy" Roth, Extreme Motorcycle Customizer and Builder
6 replies