The next time you visit the National Motorcycle Museum you’ll get a chance to see even more fine Indian motorcycles, the history of Indian better presented. New graphics, more motorcycles will help you better understand the Indian story. Several lenders have supported this exhibit area over the years. Wanda Schumaker, who, along with her late husband Del collected many fine motorcycles and cars, loaned several Indians to help expand on the story of the company. Tom Brim has loaned a rare Hendee Special, the 1914 big twin that experimented with electric starting. He also supplied an Indian Velocette; one of several machines Floyd Clymer affixed the Indian badge to. And Rocky Halter, of Rocky’s Indian is supplied a great 1951 “Rainbow Chief.” Resplendent in black and silver is Anthony Verschoore’s 1941 Four, and Ben Ferrar’s yellow Chief rounds out the post-War grouping.

Later chapters in Indian history include a period when “Indians” were made off-shore. Mini-cycles from Justin Earhart and Jay Gaard, now very desirable, help visualize that period. E.J. Cole’s 841 and a 741 show how Indian played a role in World War II. . The Indian Four pictured has been on loan from Bill McClean to the Museum for several years.  The stylish, smooth and sophisticated Indian Four is cherished by many. The four cylinder design is not technically the work of Indian Motorcycle Company. Bill Henderson started manufacturing a four cylinder motorcycle in 1912, one of the finest machines of the era. As they say there’s a little more to the story, but simply put, Indian purchased Henderson’s design, the Henderson Ace, in 1927 and renamed it the Indian Four. Over just a few years Indian’s Arthur Lemon made considerable design changes including the frame, engine main bearings upgrade to five and the Indian Model 402 was born. The Model 440 shown here was the first Four with skirted fenders, the last with 18” wheels and is considered one of the finest Fours. The Four’s engine displaces 77 cubic inches or 1265 cc’s, makes about 45 horsepower and can propel the 570 pound machine to about 100 miles per hour. The last year of Indian Four manufacture was 1942.

The exhibit also includes several graphic panels that trace Indian history. You’ll learn of the brand’s many twists and turns after the real company closed its doors for good in 1953. And you’ll get to examine several great examples of Indian’s specialty three wheelers from the 1905 Tri-Car all the way up to an amazing Traffic Car in original paint. Six Indian board track racers are poised on the boards, including a 1919 “Big Valve” from Dave Ohrt, part of the glorious history of this motorcycle company. Of course Indian is now back, in the hands of Polaris Industries with a fine 2014 offering, the Museum’s current raffle bike, the Indian Chief Vintage. 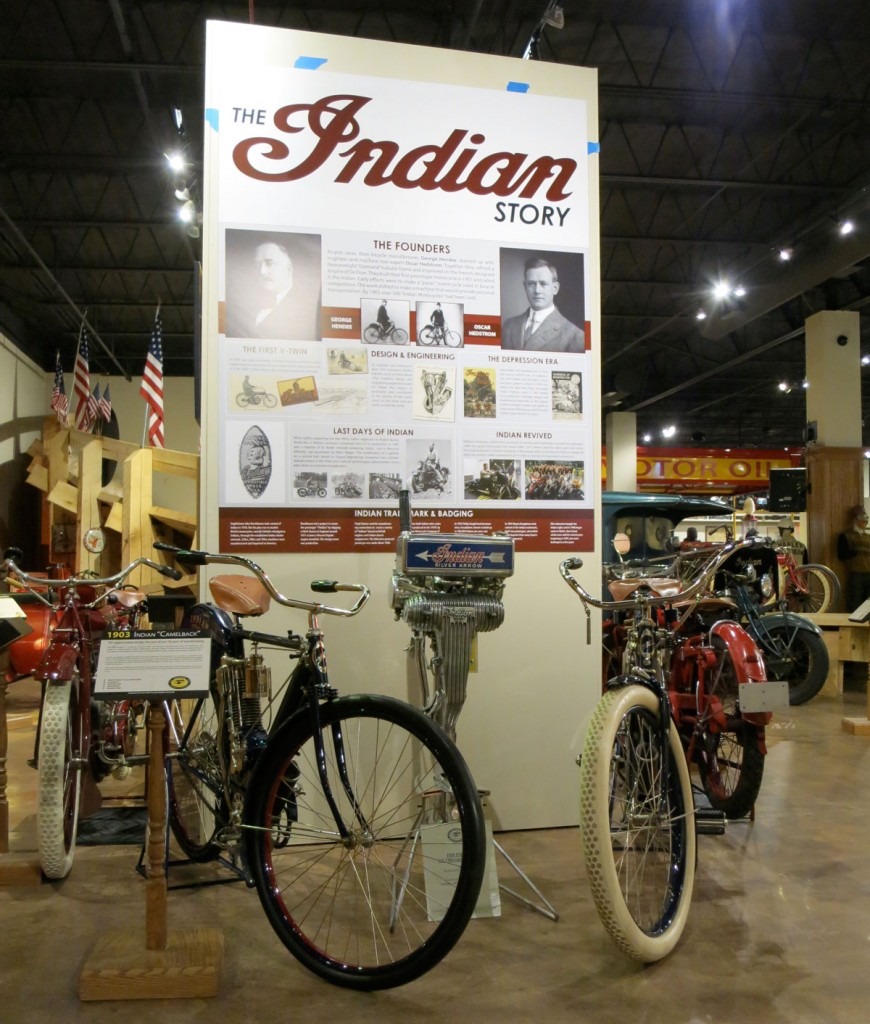 The Indian Story exhibit opens with information on corporate leadership and trademark ownership over the past century. A 1903 and a 1908 Indian are displayed flanking a gleaming Indian Arrow outboard motor. 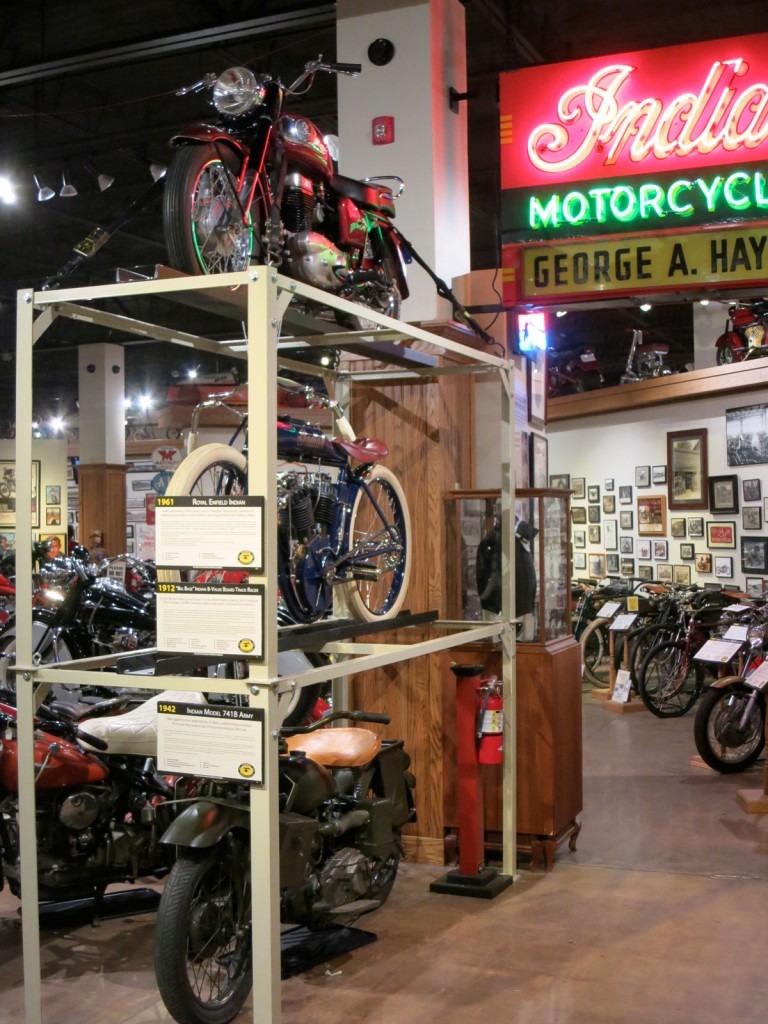 Advertising graphics and signage include this great original neon sign. The three high display includes an Indian Matchless single, a 1912 “Big Base” twin racer and a 741 Military Indian. 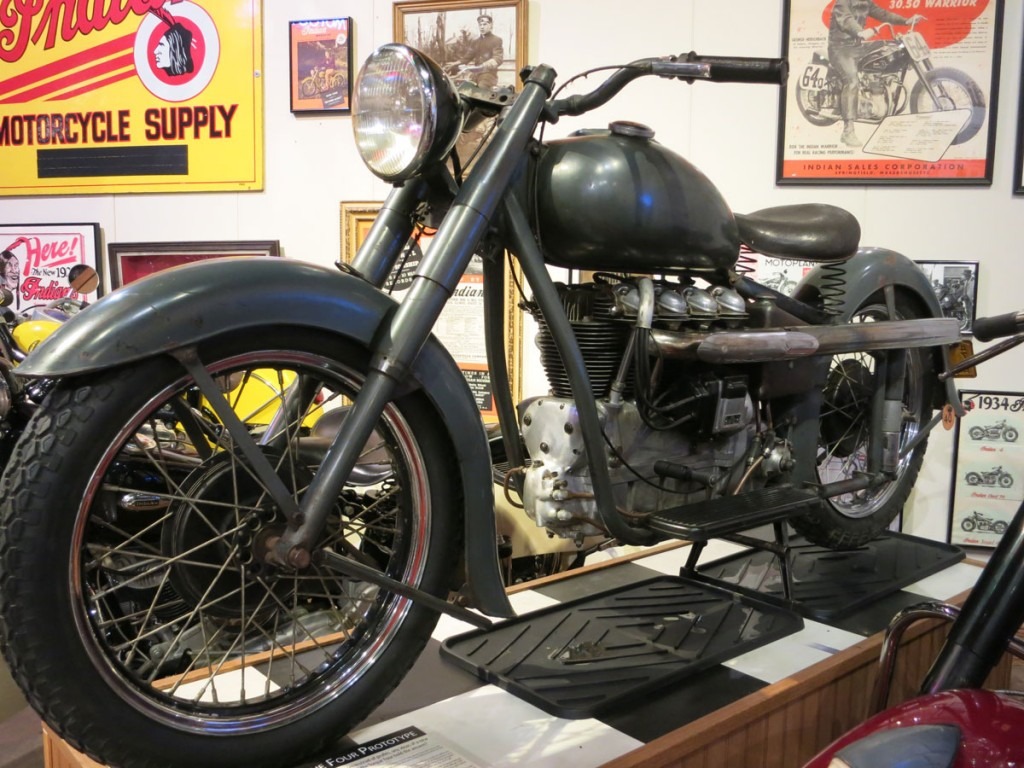 Looking for their next great four cylinder motorcycle, Indian acquired Torque Engineering Company which had produced this prototype in 1943. The engine served as “modular” design employed in single and twins in the late 1940’s, early 1950’s, but the four cylinder version was never put into production. The Torque Four is on loan from the Antique Motorcycle Foundation. 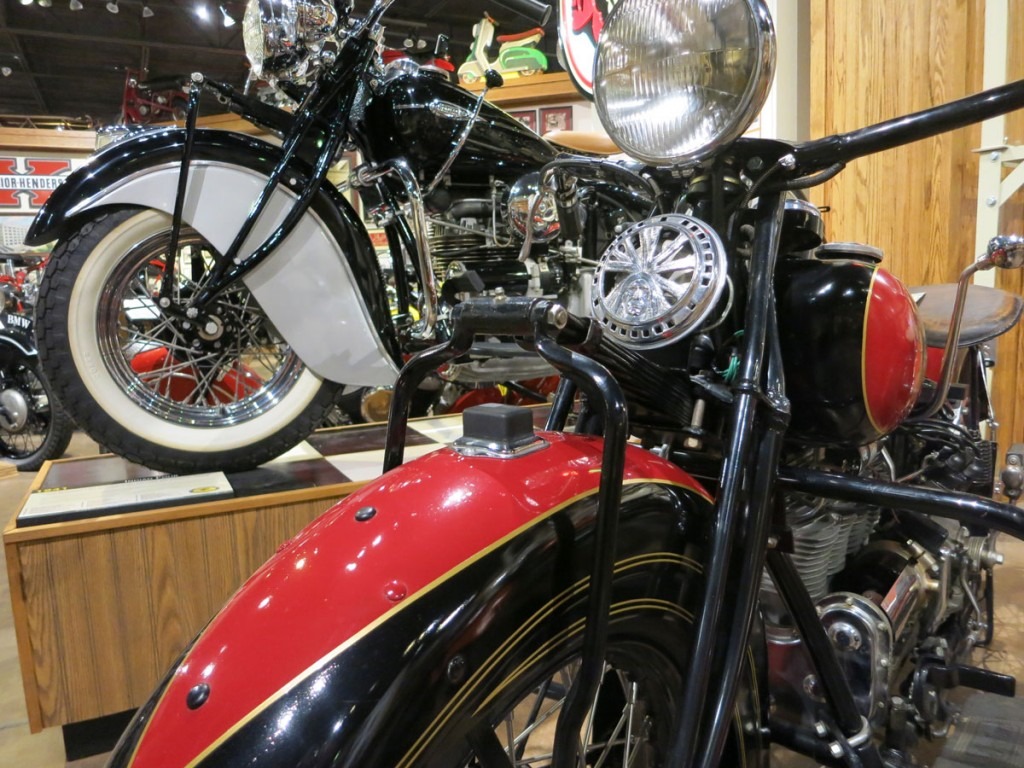 1941 was essentially the last year for the Four and the only year that used 16 inch wheels. This beautiful Four is on loan from Anthony & Brenda Verschoore. The perfectly restored classic red and black “upside down” Four belongs to Wanda Schumacher. 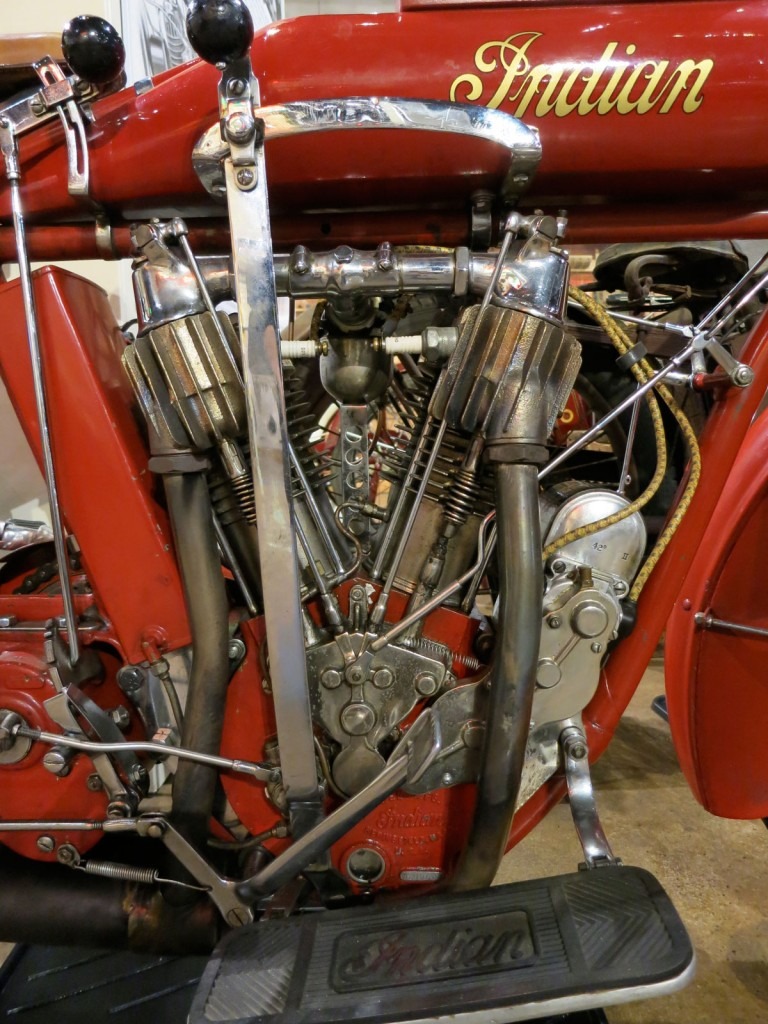 For 1915 Indian upped the ante and offered a three speed transmission, and grand style. 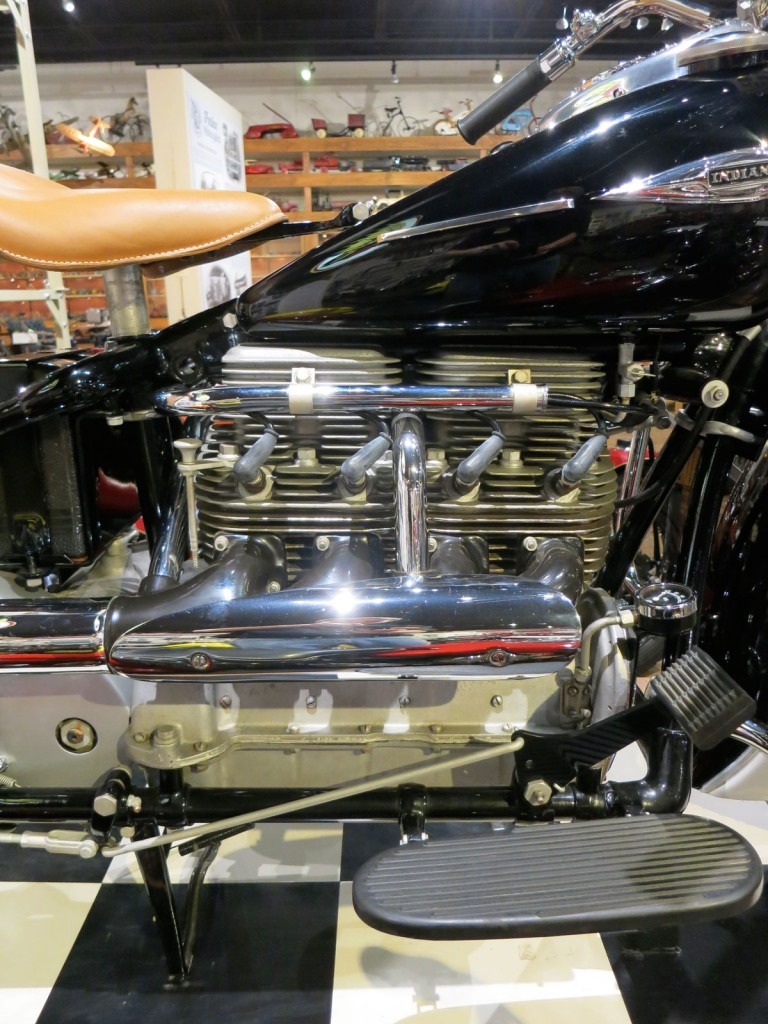 Following the two year run for the “upside down” Four, Indian reverted to the exhaust outlets being low, a cooling relief for riders. These engines used a mechanically actuated valve train, but are inlet over exhaust. This is similar to the early designs in which the inlet valve was “atmospheric,” sucked open by the piston traveling down in the cylinder. 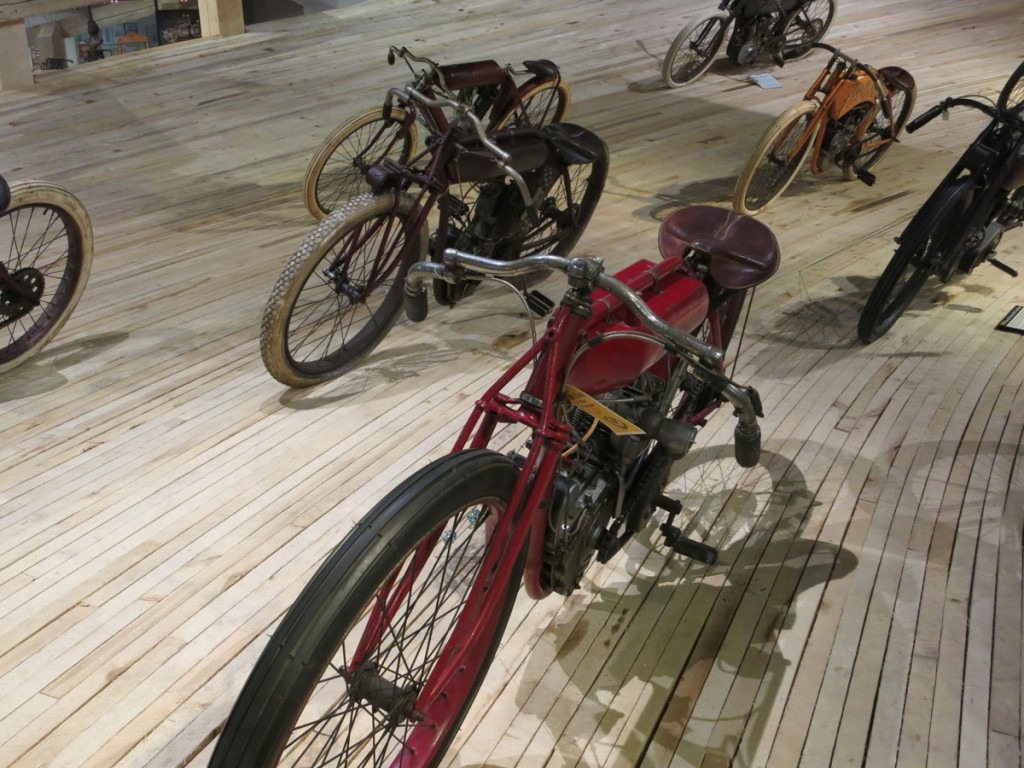 Indian racers for Board Track and Dirt Track racing range from a pair of very early “Torpedo” tank bikes up to a pair of Daytona racers from 1919 and 1920. Harleys and Merkels in hot pursuit. 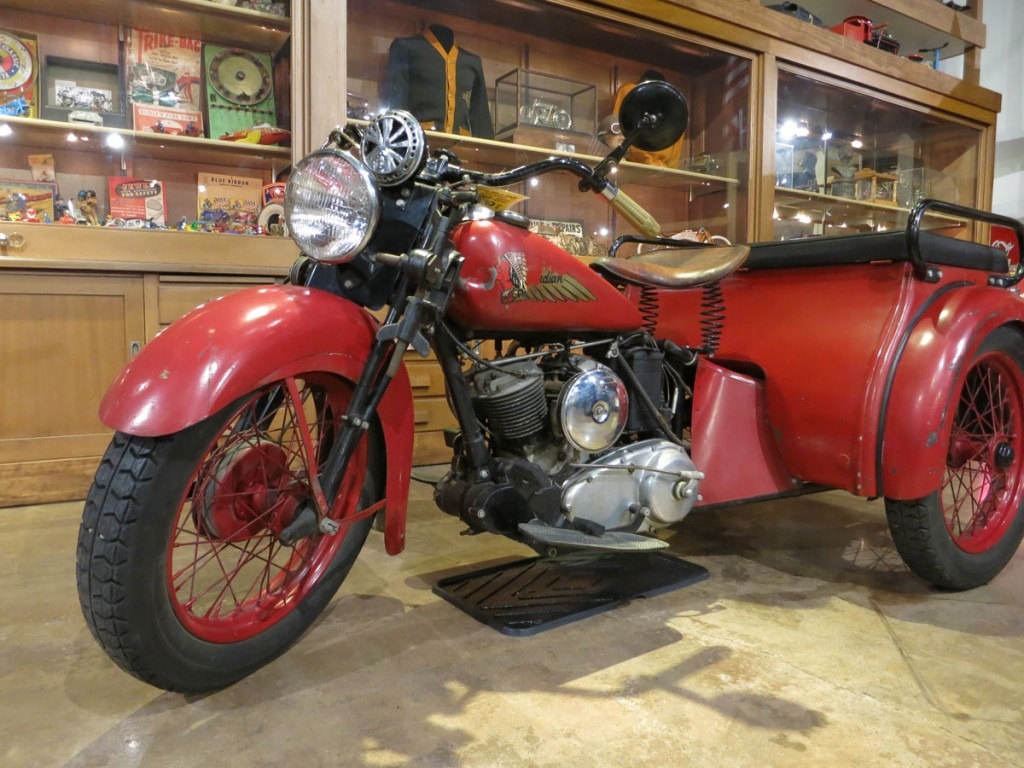 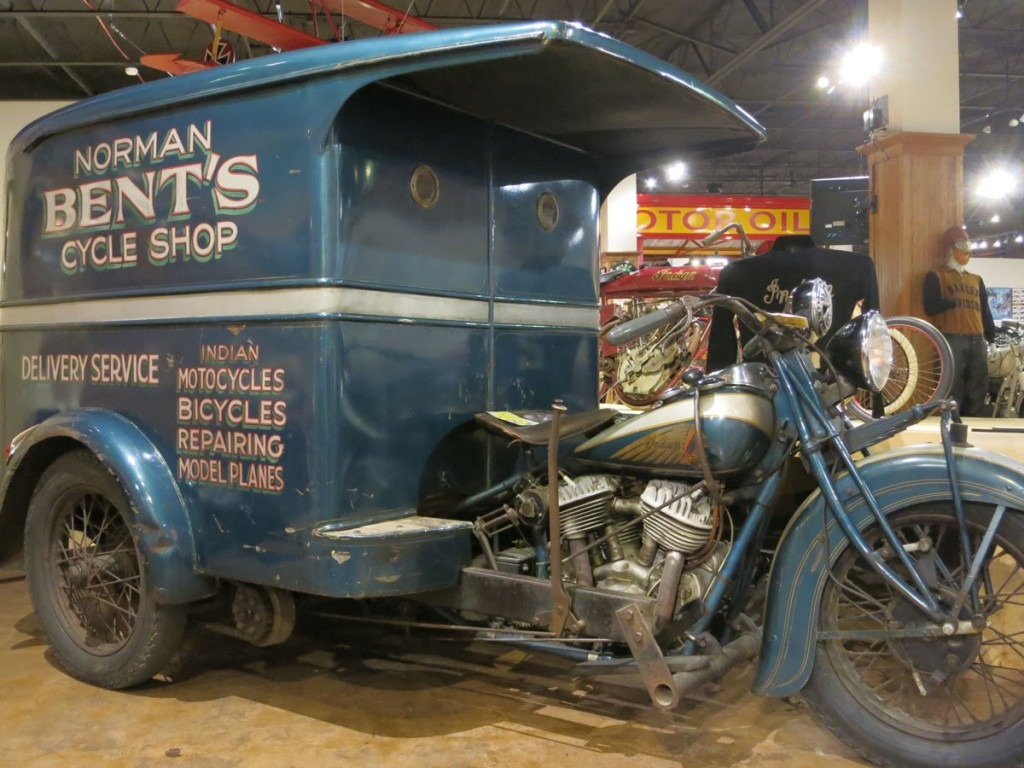 When YOU donate to the Museum, where does the money go?