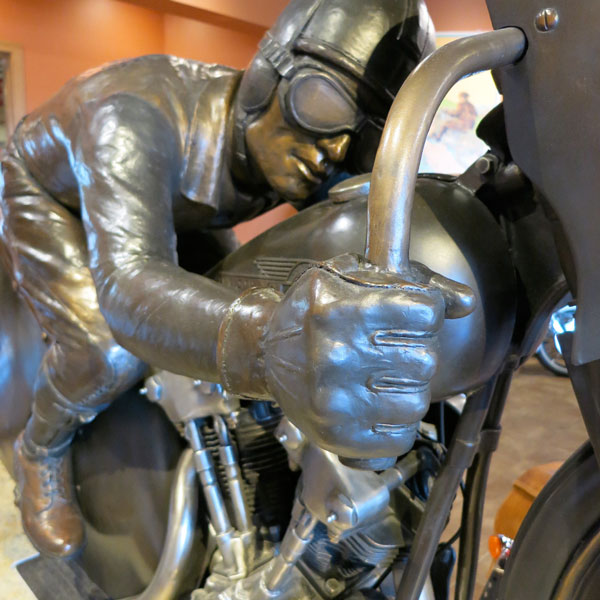 Champion hillclimber and dirt track racer, Joe Petrali had a long career as a very successful “do-it-all” motorcyclist. As with many of us, he got his start in riding through a friend down the street, and in competition because a race track was almost across the street from his home.
Joe Petrali’s first competition event was an “economy run” at the fairgrounds near his home in Sacramento, California. 14 years of age and weighing 80 pounds, Joe tucked in, ran smoothly and recorded 176 miles per gallon and won his class. This was a sanctioned event, and Joe had just won his first national championship.
Ironically, Petrali’s big break came with the death of “Shrimp” Burns, killed in a race in Toledo, Ohio in 1921. After running some local races, Petrali was looking competitive enough that Indian prepped the late Burn’s bike for Joe to ride in Fresno, California. Petrali showed well in race practice except for some tuning problems; Joe had been put out on a bike that was used to conduct a new alcohol fuel test and jetting was a bit off. During this, his first real race, Harley team members apparently boxed him in a bit for part of the race. When he faked an engine problem, and momentarily dropped back, the Harley team riders figured he was no longer a threat. It was then that Joe motored to second place!
Near the end of the great Board Track Racing era, Petrali logged his first really important win. Plans were for him to race an Indian at the famed Altoona, Pennsylvania board track, a 100 mile race on the 1.25 mile board track. With his bike mistakenly shipped to the wrong town, Joe was almost out of a ride. But Harley rider Ralph Hepburn had crashed in practice, was injured and out of the race and offered his bike to Petrali. Joe not only won the race but set a 100.36 mph 100 mile board track record that was never broken. This 1925 win proved to be what set him up as a factory rider with Harley-Davidson. He went on to win three national titles before the 1925 racing season was over.
Joe Petrali also won national titles in 1926 and 1927, the latter on Excelsior race bikes when Harley temporarily pulled out of racing. Seriously injured and out of dirt track racing for about a year, Joe came back and began an assault on hillclimb competitions. 1929 saw him take both 45 and 61 cubic inch championships. His favorite bike, a 61 cubic inch Excelsior he built and dubbed Big Bertha took him over the top of several hillclimb courses; a feat never before accomplished.
As the Depression took its toll on the world and the motorcycle industry, prompting Ignatz Schwinn to stop motorcycle production at Excelsior in 1931, Petralli was out of work, but again recruited by Harley-Davidson. Aboard Harley hillclimbers, Petralli won national championships in 1932, 1933, 1935 and 1936. But by 1937, now married and starting a family, Petrali scaled back his racing partly because the challenge was lessened; he was winning everything including a string of 10 Class A dirt track races in 1935.
Petrali won his 49th and final national championship at the Muskegon, Michigan hillclimb. Scott Parker is the only rider to have bested Petrali’s record. But as he wound down his dirt track and hillclimb career, he dabbled in land speed record competition at Daytona Beach, Florida. There he set a well known record of 136.183 aboard a Harley-Davidson EL overhead valve “Knucklehead” semi-streamlined machine. A striking full-size bronze monument that was created by artist Jeff Decker honors Petrali for this record run and greets visitors as they enter the National Motorcycle Museum.
For his amazing competition riding over nearly a 20 year career, Joe Petrali was inducted into the Motorcycle Hall of Fame in 1998.