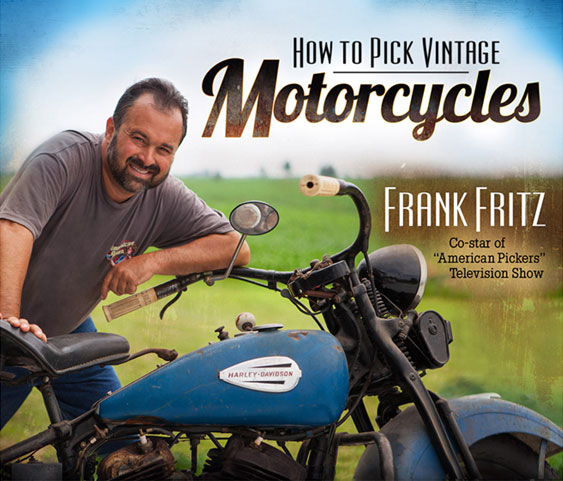 On the road with Mike Wolfe, Frank Fritz is half the picking duo we watch on the television program “American Pickers.” Fritz’s new book is a very casual treatment of his life experiences with always being on the lookout for a good deal, an item he could “flip” and make some money. More of a biography than a book on how to make money picking, we learn that Frank was very motivated to make money even at an early age. He wanted a motorcycle badly and bought and sold till he put the money together for a new $4100 Harley, at age 14! Happy to make a few hundred or a thousand dollars on a deal, he generally avoids the stratospheric prices of rare collector bikes. Frank focuses on less expensive machines with a broader audience so the capital outlay is small, the sale comes quickly, risk of a “bad deal” is small.

We also learn what Frank keeps for himself; he says he has a few hundred motorcycles including his first bike, and about 9000 motorcycle toys. Frank loves the hunt, making the deal and says he sleeps well at night because he is fair when buying and selling.

Don’t be impulsive or impatient, avoid bikes that are overpriced, offers Frank. Wait, come back again if the owner won’t sell the first time around, or if the price is too high. Be on the lookout for motorcycles that are in original condition, and also important, unaltered. Though Fritz seems to have traded in a lot of customs and choppers over the years, he recommends bikes that have survived in good condition, unmodified, especially old Harleys.

The book is illustrated with Frank’s finds, though he also pays a visit to the National Motorcycle Museum and gives us a general motorcycle history lesson, talks collectibility, racing and discusses unusual bikes on display at the Museum, some exceptionally rare and valuable.

The book is highly illustrated, contains about 126 pages, around 115 photo illustrations and is available from the Museum Store for just $29.95.

To get your copy, visit the Museum Online Store!