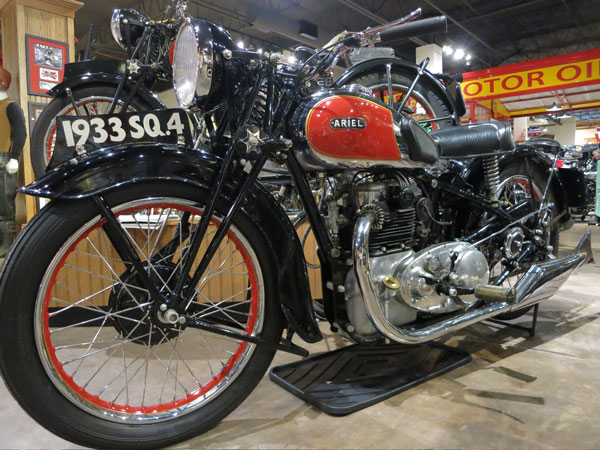 As many motorcyclists know from several decades of riding two and four cylinder bikes, adding a couple of cylinders can make for a well balanced,  smooth running engine. With the exception of Pierce Fours and the American Ace, then the Indian Four, up until about 1970 the world was for the most part used to riding singles and v-twins. A couple of British designers came on the scene in the 1930’s with some interesting parallel twins that proved ultimately to be landmark designs. One of them, Edward Turner also brought us the very refined Ariel Square Four, a remarkable yet problematic machine launched in 1930. (Read More)

There are a couple of ways to create a “square four” engine layout, but Edward Turner’s approach was essentially two parallel twins in tandem, one behind the other. The two crankshafts were geared together and a chain drove the overhead camshaft. A manifold brought fuel to each of the four inlets from a single carburetor. Unique for British machines of the time, the cases were split horizontally and the transmission was “in unit.” Earliest, 1931 and 1932 machines were overhead cam and 500 cc’s, but went to 600’cc’s for 1932 to 1937. By 1937 a less complex pushrod overhead valve setup was used with displacement bumped to 600 cc’s to give a bit more power for a sidecar, then popular in England. By 1937, displacement was up to 997 cc’s and the smaller engines no longer produced. The cast iron top end was replaced by alloy cylinder and head with attractive polished fins; with its all alloy engine and four graceful exhaust headers the Mark II Square Four was a very sleek machine. But the engine was plagued with cooling problems even the all-alloy top end could not cure. Bottom ends did not hold up to even moderate abuse; high revs mixed with low oil levels often meant a rod went through the cases. Or high temperatures in the rear cylinders due to lack of air flow there would cause the head to warp and the head gasket to fail.

The Square Four chassis also evolved from a rigid rear with a girder fork to a hydraulic fork and plunger rear suspension, and seating went from a sprung solo seat to a rigid mounted dual seat. More expensive than most other British bikes, though with quality design details, the Square Four was for gentlemen riders seeking something finer that stood out from the crowd.

One of many storied British marques, Ariel has an interesting history that includes taking over ownership Triumph Motorcycles in 1936, then being sold to BSA in 1944! The company grew out of a bicycle manufacturing company, making its first motorcycle in 1902. The last Ariel Square Four was made in 1958, but Ariel experimented with the stylish streamlined Leader and Arrow Super Sports, ceased all production in 1965. As stated in the catalog for the Guggenheim Museum’s Art of the Motorcycle exhibition, 1998, “Only in 1969, with Honda’s CB750, did the four-cylinder achieve mainstream success.” In the arena of road racing, Kawasaki, Yamaha and Suzuki all made use of the engine layout, but by then liquid cooling was the norm and solved many inherent problems of the square four layout.

When you visit the National Motorcycle Museum you’ll have the chance to look at this 1933 model on loan from Don Rosene, Anchorage, Alaska, plus Square Fours from 1947 and a 1958.