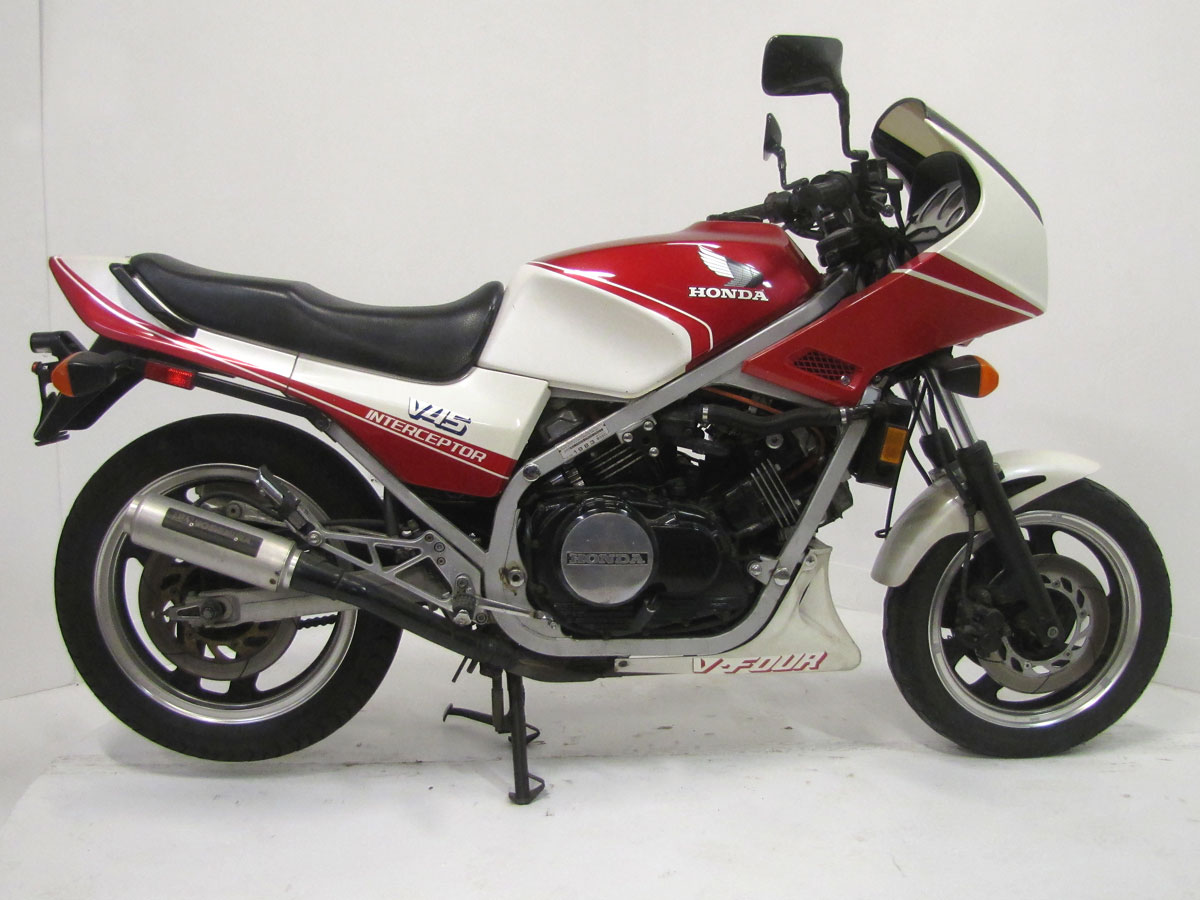 After development on Gran Prix road race circuits, in 1982 Honda debuted a radical V-Four engine in 750 and 1100 displacements, but offered it in their shaft driven Sabre and Magna models; a “standard” and a cruiser, maybe to have time to work out bugs. In 1983 they reworked that shaft-drive 750 and built a steel perimeter framed sport bike called the VF750F Interceptor and offered it in pearl white with candy red or candy blue for America. AMA Superbike class regulations had just changed. Displacement went from 1000cc’s down to 750cc, with the race bikes needing to be production based. The 1983 Honda VF750F Interceptor was designed to win the AMA Superbike class. Some would call it a “homologation special.”

Late winter of 1982 Honda had been conducting secret tests of a mean looking all black mule at Daytona, had AMA personnel there to make sure it could be homologated for 750 Superbike in the up coming race, March 1983. Ducati and others had begun to offer sport bikes with half fairings in the mid-1970’s. The VF750F’s half fairing exposed the entire engine in side view, but went a step further with a chin spoiler. AMA OK’d the bike for the Superbike class, but only without that chin spoiler; too much streamlining.

The public’s first viewing, as I recall, was the Great American Motorcycle Show in Los Angeles, late 1982, where it was on a rotating platform in the Honda display, complete with a model to explain its features. It stole the show in that motorcycle category. (I went home and placed deposits at two shops in my neighborhood and bought the bike that arrived first, a red one. At that point no one knew how many would be made.)

Honda had been running the CB750F in line four a couple of years but working the “massive attack” approach put Freddie Spencer, Mike Baldwin and David Aldana, plus other riders on the new kitted bikes. At the Daytona Superbike race, these three riders took the top three positions, and Honda had five of the top ten slots. But by season end, it was Rainey, Kawasaki, Baldwin, Honda and Merkel, Honda with Spencer in fourth for the season. But by season’s end Honda had won eight Superbike races on their new VF750F.

Though there were some top end oiling and bearing clearance problems with the radical new V-Four, in all the bikes sold well, worked well, were popular race mounts especially with Honda’s $10,000 engine kit and other improved components. The VF750F offered a perimeter frame, cast alloy wheels, cast alloy swingarm and single shock rear suspension, an adjustable anti-dive fork, clip-on bars, somewhat rear-set pegs, the upper fairing and a nicely integrated dash, and in a time of widely varying wheel/tire experimentation, a radical 16 inch front wheel focused on quick handling. It was also liquid cooled and used a slipper clutch, a first for street bikes.

Focused on building a street bike they could race, the VF750F was replaced with the VFR750F in 1986. Compare this three year run to the original CB750’s 10 year run with little change. In addition to gear driven cams and an aluminum spar frame, appearance, engine performance and handling were all improved in the VFR; it even got a full fairing. By this time the Suzuki GSXR750, Kawasaki GPZ750 and Yamaha FZ750 were on the scene. At the 1986 Daytona Superbike race, Lawson, for Yamaha, and Schwantz, for Suzuki were first and second with Fred Merkel third on the new VFR750F Honda.

This nice, fairly stock VF750F is on loan to the National Motorcycle Museum by Joel Schumaker. A good number of machines currently on display in the Japanese bike area and in the Cafe Racer exhibit will remind you of the development of sport bikes.