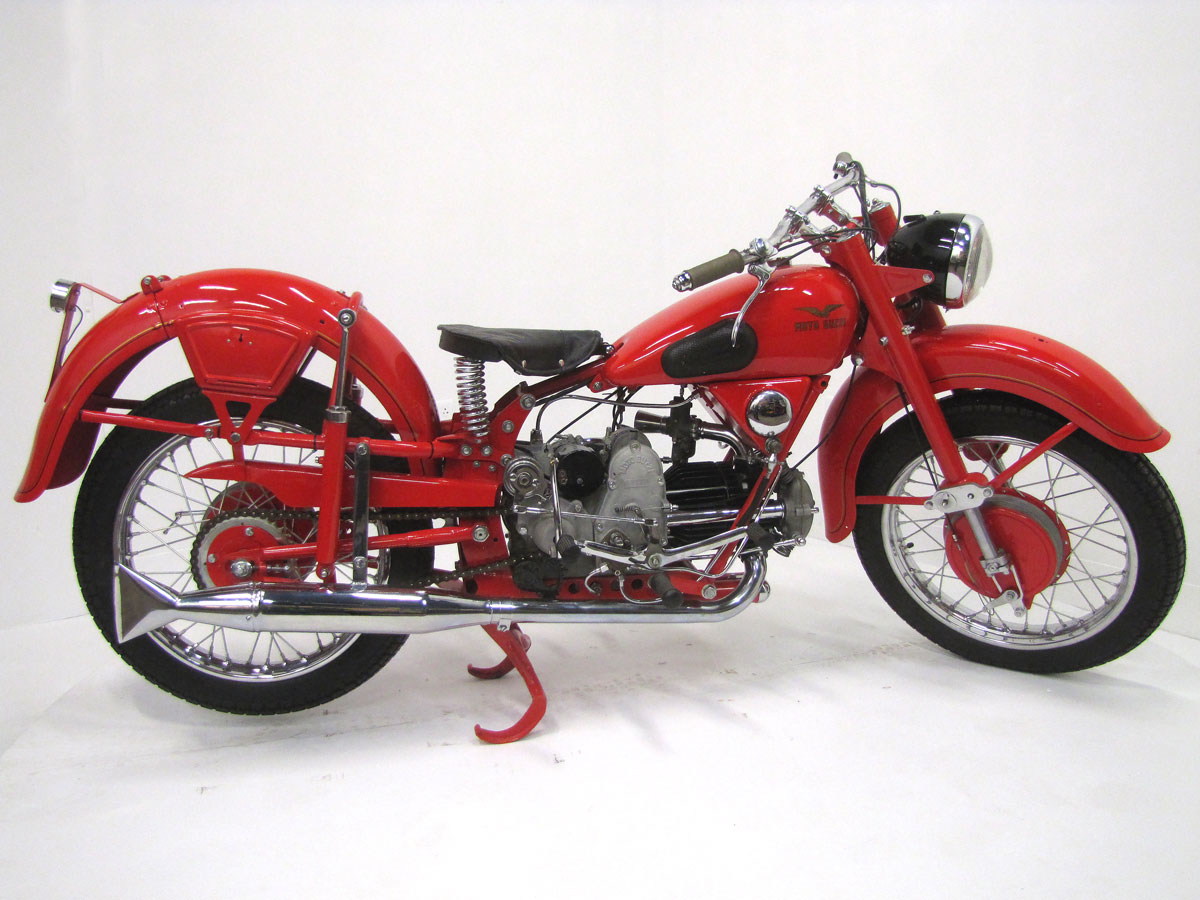 Another great anniversary has been celebrated this week, that of Moto Guzzi which was a century old on March 15. In 1921 Moto Guzzi was established in Mandello del Lario, northern Italy, the brainchild of Carlo Guzzi, Giovanni Ravelli and Giorgio Parodi, all members of the Italian Air Corp during World War I. Guzzi-Parodi was the name on the first fuel tanks soon to be changed to simply Moto Guzzi. Today, after a century of celebrated unique style and performance, the company is under the wing of Piaggio, well known for its Vespa scooters.

A company focused on racing to prove their machines, in 1955 Moto Guzzi held 135 world speed records, many of them with a 500cc single based on the G.T.V design you see here. Guzzi called them “The Record of Records.”

The 1948 G.T.V Grand Turismo is a traditional Carlo Guzzi-designed 500 cc, horizontal four-stroke, overhead valve, single cylinder design with “V” engine nomenclature. Its remote float Amal carburetor had a straight shot down into the cylinder head. The external, “bacon slicer” flywheel is another common Moto Guzzi characteristic for this era. Note the rear suspension springs and damper locations and the “upside down” fork design. Guzzi used girder forks and steel knee-action friction rear dampers until 1947. Then came these telescopic forks and rear hydraulic dampers. A larger front brake was part of the redesign.

The G.T.V was a sporting, do-it-all kind of motorcycle with comfortable seating and high-clearance fenders. Tough, with excellent handling for the era. And full of character, stylish in the extreme with its all-red paint, touches of chrome plating. There is no mistaking a Moto Guzzi of this era.

The G.T.V, launched in 1934, forged the way for the famous postwar Falcone. It was beloved by the Italian military and police forces, and remained in production essentially unchanged until 1976. Forty-two years of non-stop production for a single model must be close to a world record.

When you visit the National Motorcycle Museum you can view several Moto-Guzzis and other fine Italian bikes including Parillas, Aermacchis and Ducatis plus Vespa, Rumi and Lambretta scooters. This fine Moto Guzzi is from the Jill and John Parham Collection.