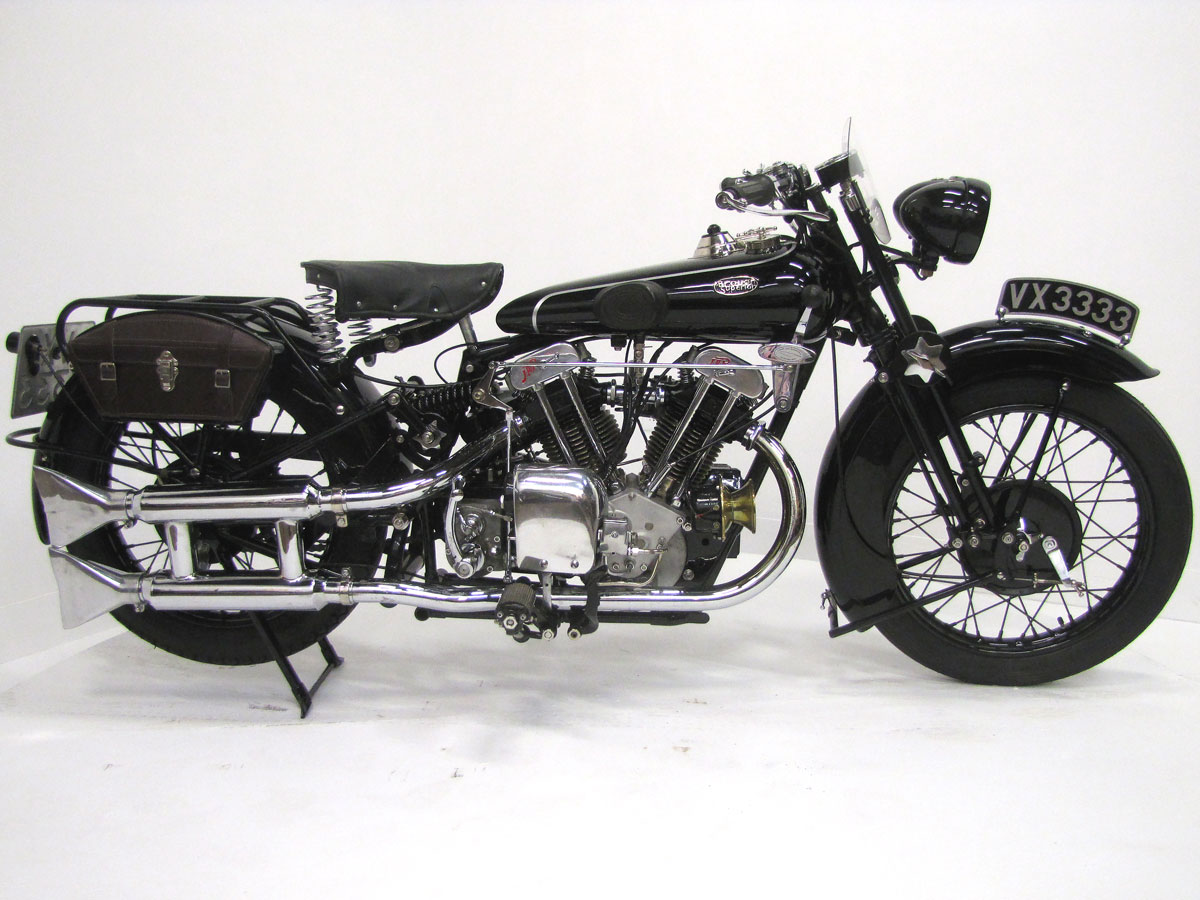 Brough motorcycles were described in period literature and advertising as the “Rolls Royce of Motorcycles.” Big, touring quality motorcycles with large, by British standards, V-twin engines and nice details like the nickel-plated fuel tanks and leather tool kits, Broughs were at the top of British two-wheeled designs. George Brough, pronounced “bruff,” personally certified every motorcycle built in his Nottingham, England factory. Brough was not an engine maker. British engine builder J. A. Prestwich, J.A.P., supplied the overhead valve engines. J.A.P. engines powered other brands of motorcycles and even some Morgan three-wheelers.

The 680 Black Alpine shared Brough “genes” with the larger SS100 and was made from 1926 to 1936. About 150 of all Brough models were made each year. Rarity is still a reason Broughs are sought after and command high prices. George Brough’s wealthy celebrity customers included T.E. Lawrence, a.k.a. Lawrence of Arabia and George Bernard Shaw, the composer.

Brough Superior built motorcycles, sidecars and a few cars from 1920 to 1940, even made aircraft parts shortly after the start of World War II. Brough’s machines were superbly styled and beautifully made and had performance to match.

The restoration of this Brough took a long time due to scarcity of parts, a generally complicated design and difficulty in finding experts on items such as the rare speedometer. The work was started by Dave Smith Classic Motorcycles, Plainfield, Illinois. More recently the restoration was completed by John Young Classic Auto Restoration, Lake Barrington, Illinois who has ridden the machine a good number of miles, tested the charging system and the electric Klaxon horn. Owner Don Rosene of Anchorage, Alaska adds to his long list of motorcycles on loan to the National Motorcycle Museum with this fine 1930 Brough Superior 680 Black Alpine.

When you visit the National Motorcycle Museum you can look at several Broughs including this 680 Black Alpine, SS100’s and even a SS100 Pendine competition model and compare them to several Vincents, the other premium British motorcycle brand.