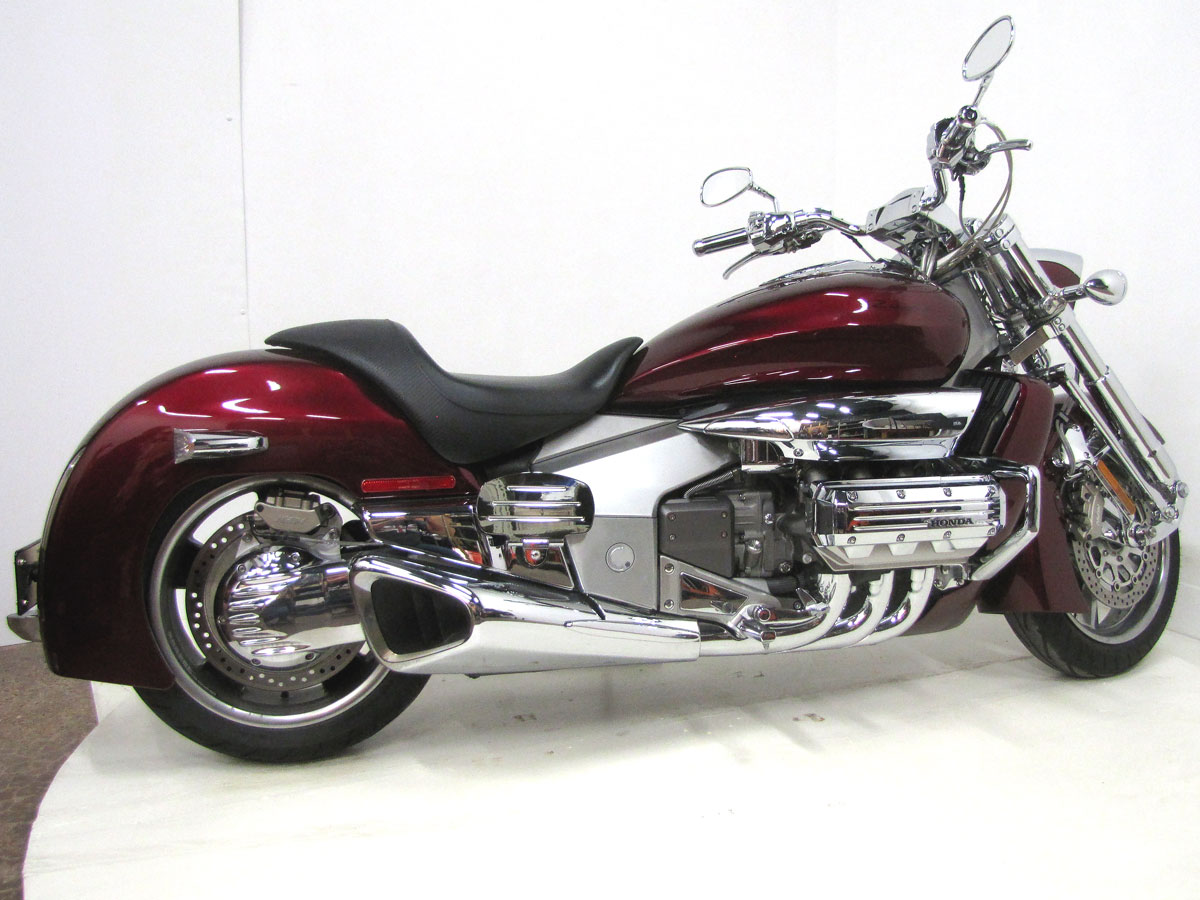 Honda Motor Company is the largest engine manufacturer in the world. And while they are known for some fine high end, high performance motorcycles, they became famous through their Honda C100, the little “step-through” 50 from the early 1960’s. This modest machine attracted many new riders to our sport. None the less they have brought us engineering marvels and oddities like the oval piston NR750, the limited production NSX automobile and this Rune for the cruiser segment. These machines seem more like engineering exercises than production for corporate profits, which is by far most of what Honda has been about, besides racing. But this unusual project was driven by American Honda, did not originate in Japan. Over several years styling models were built and displayed at motorcycle shows and voted on. The final product is this machine which was built in the Honda factory in Marysville, Ohio.

To power Honda’s Rune, the well developed flat six cylinder engine was borrowed from the Gold Wing. It had been used in the more traditional Valkyrie and with some design work, the 1832cc, 112 cubic inch motor became a stylish powerplant. The Rune motor got six throttle bodies, the Gold Wing uses only two larger units. According to a contemporary RIDER magazine dynamometer run, the Rune motor puts out slightly more horsepower and torque up to about 4000 RPM, but makes much better sound. At 878 pounds, slightly more than a Gold Wing, it needed the power. No slouch, some tests had the big cruiser running 12 second quarter miles at 105mph.

While there are many parts of this bike for your eyes to feast on, the trailing link front fork is perhaps most interesting and a real throwback for Honda. Completely chromed, very stylish and unique it might cost as much to manufacture as some complete small Hondas.

Most of us that have watched Honda for its 70 plus years have seen engineering at the fore. In this case the stylists started the project, and the desire was to set a new, higher bar for production cruiser class motorcycles.

We would appreciate your feedback, but with the possible exception of the limited production Confederate machines, Honda succeeded. But at $27,000 only a few thousand units manufactured over 18 months were needed to satisfy customers.

The National Motorcycle Museum has a good number of Japanese-made motorcycles, even a scooter, on display. So in case you have not had a chance to see a Rune up close, stop by and take a look at it and dozens of other Japanese street, competition and custom bikes.