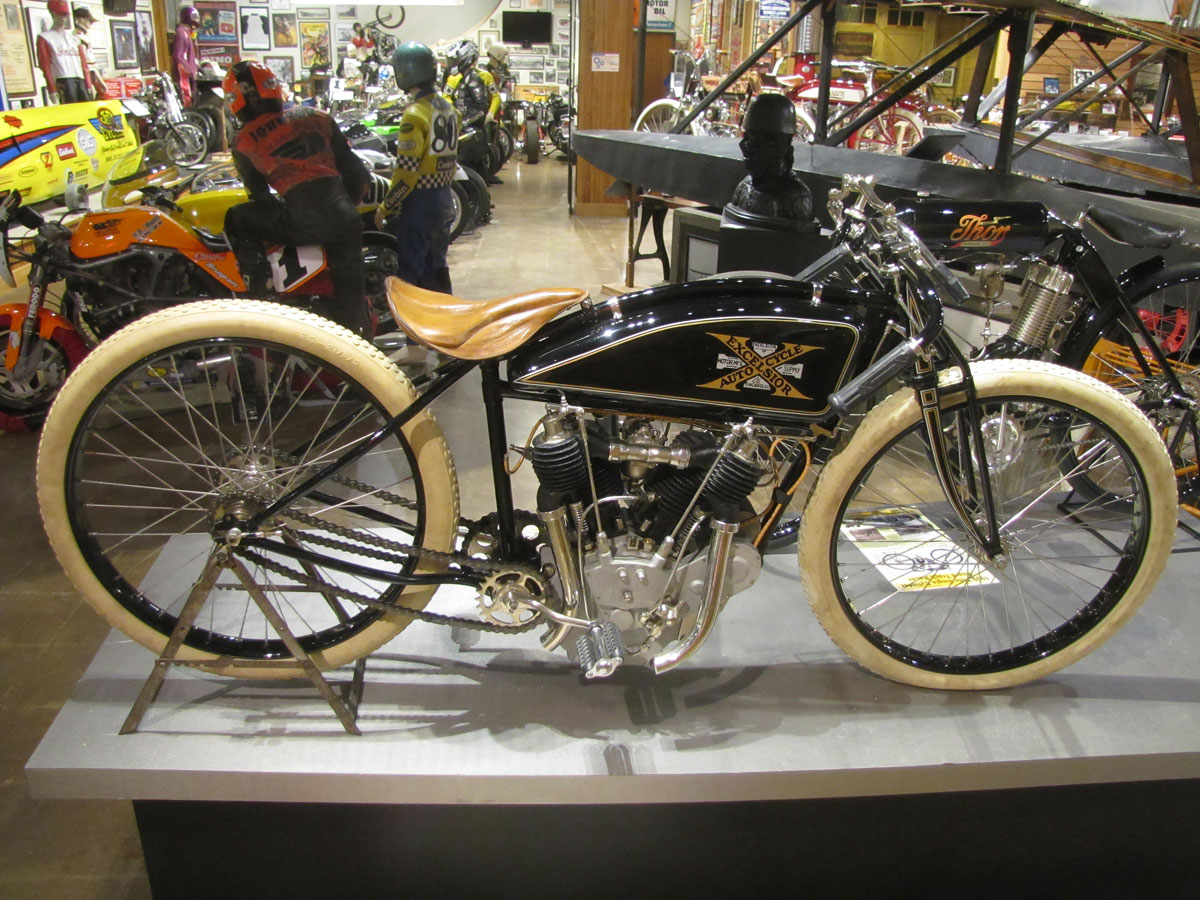 Like other manufacturers, Ignatz Schwinn, who acquired Excelsior in 1911, believed racing improved motorcycle engineering through track testing. The visibility of racing success helped sales as well. A machine similar to this one won the American National Championship on dirt; 300 miles in 3 hours, 29 minutes and 51.4 seconds, an average just over 85 MPH. The 1916 and 1917 Excelsior catalog boldly cited the achievement.

In the Board Track racing era, about 1909 to 1915, motorcycle racing was a mainstream spectacle, like NASCAR, football and baseball are today. Several dozen board race tracks a quarter mile in length were built in large cities from coast to coast, most by promoter Jack Prince. Makers like Cyclone, Merkel and Thor competed, but the greatest involvement was from Indian and Excelsior.

Most motorcycle engineers used cables to control spark advance and the carburetor.  Early on, carburetors were so primitive ignitions were favored for speed control; not the best approach. Note the linkage used to operate throttle and spark advance on this Excelsior, similar to Indian’s approach. Pedals could be used to start the engine but push and pull starting was used as well for these rolling start events. Also note the exquisite hubs and the hand-operated oil pump to lube the engine while racing; all exposed metal that is not painted black is nickel plated. While at racing speeds, auto and motorcycle racers of this era needed to manually pump oil to lubricate their engines. Since the racers in this era were “direct drive,” had no clutches, races were run with rolling starts. Around 1913 some riders achieved speeds in excess of 100 mph on longer board tracks. Tires were a constant problem. Carcass separation and tires coming off rims often resulted in crashes and injury.

Though some teams used telescopic or link forks of some design, many of the bikes were “rigid” front and  rear, had no suspension. Racing motorcycles running on the boards, also on dirt were not permitted to have brakes until the mid-1960’s.

The early era of Board Track racing faded around 1915 as serious rider and spectator injury became uncomfortably frequent. The National Motorcycle Museum regards Board Track racing as a very important part of motorcycle history. A large section of board track was constructed in the Museum and up to ten board track machines are displayed. A video monitor runs period racing films.

This great Excelsior racer is one of about 20 early racers on display at the Museum and is part of the John and Jill Parham Collection. If you want to learn more about the origins of Board Track racing, get a copy of Don Emde’s new award winning book, The Speed Kings available from the Museum Store. CLICK HERE TO GET A COPY OF THE SPEED KINGS.