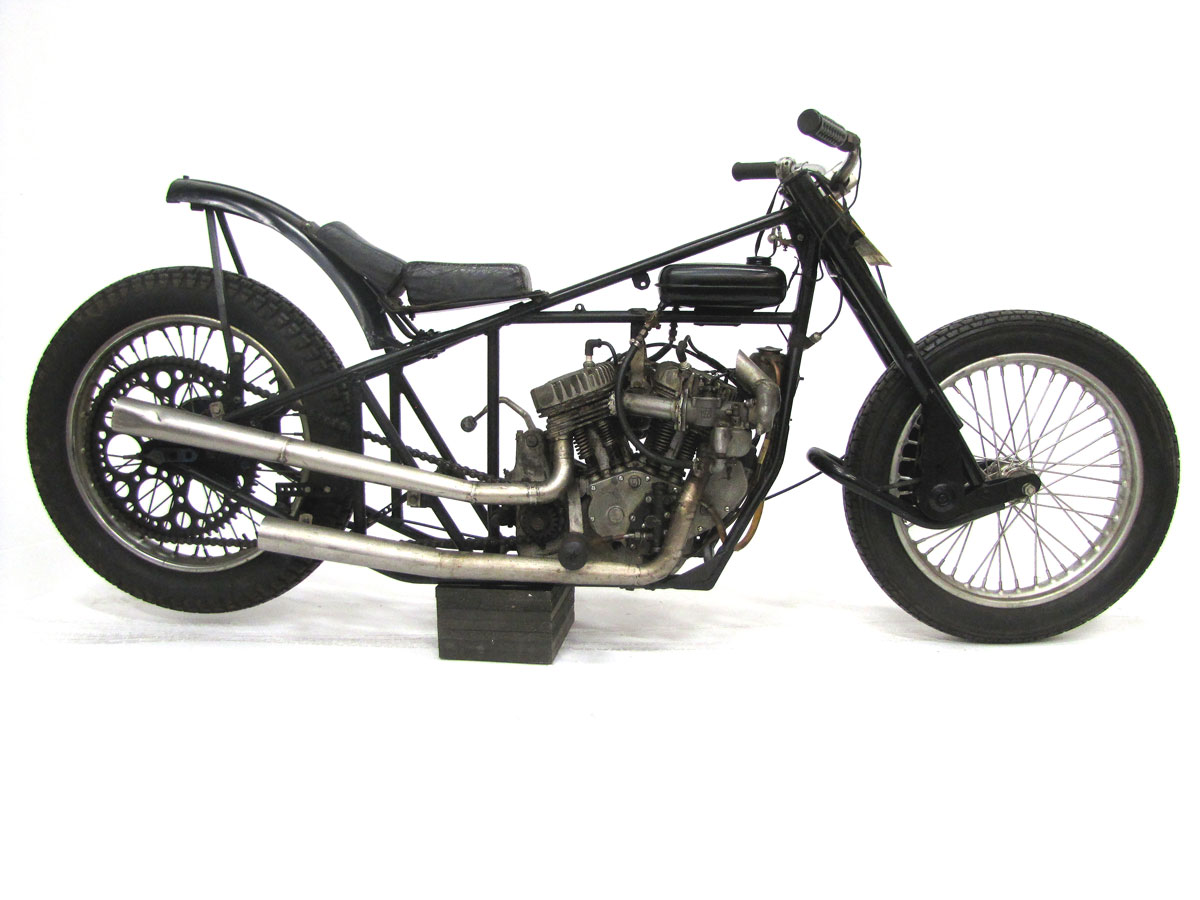 Though Indian Motocycle Company of Springfield, Massachusetts made 26 overhead valve “factory” hillclimb bikes in 1925 and 1926, this machine is totally custom. The bike was raced by a Michigan rider, the late Paul Pierce. It’s unknown exactly when the chassis was built but the designer was very forward thinking. With the engine mounted far forward, the rear section of the frame is long. Both features help to keep the front wheel down something very important for hillclimbing. Though the tubing is small diameter, bridging and triangulation bring rigidity. The fork is certainly unusual for a hillclimber. Most hillclimbers of the era would run a springer or girder fork, essentially a stock unit. Here we see a leading link fork from, probably, a Greeves Challenger motocross racer from about 1965. Period literature states 6.5” of travel, probably twice that of a Scout’s stock fork. Two pillion pads offer some cushion for the rider. The rear fender is kicked high to keep him on the bike on the steep inclines. In the case off a bail-off, the magneto ignition is cut off via the leather strap attached to the rider’s wrist a.k.a. the deadman’s kill switch, and through contact points on the handlebar. The band brake is still in place on the rear wheel.

The 1924 Scout engine runs on alcohol, a fuel preferred in the era for its quick burn and high energy output. But it takes more alcohol than gasoline to run a given engine, and larger carb jets. Here we see two carburetors, one for each cylinder, though a fairly small fuel tank. Interestingly, they are mismatched and very rare alcohol “barrel” carbs, one a Schebler, the other a Linkert, on hand made manifolds. Typically compression ratios of up to 15:1 were employed but that fact is unknown on this machine, as is it actual displacement. Note that the cooling fins are shaved off the cylinders and though the stock gear primary and transmission are used, a simple hand shifter / foot clutch set up is employed. Long tapered megaphones, long headers work together for a broad power band, torquey power delivery. Typically the gear ratio is set for a hillclimb bike and once off the line the machine stays in the launch gear.

Once on display at the Wheels Through Time Museum in North Carolina, the Indian was acquired by publisher, motorcycle collector/racer and Cannonball rider, Buzz Kanter. Buzz recently donated the hillclimber to the National Motorcycle Museum. Here it will reside in the hillclimb display, not far from one of the rare OHV Indian Factory Hillclimbers. We thank Buzz for donating this gloriously gnarly Indian, a grand piece of motorcycle history.