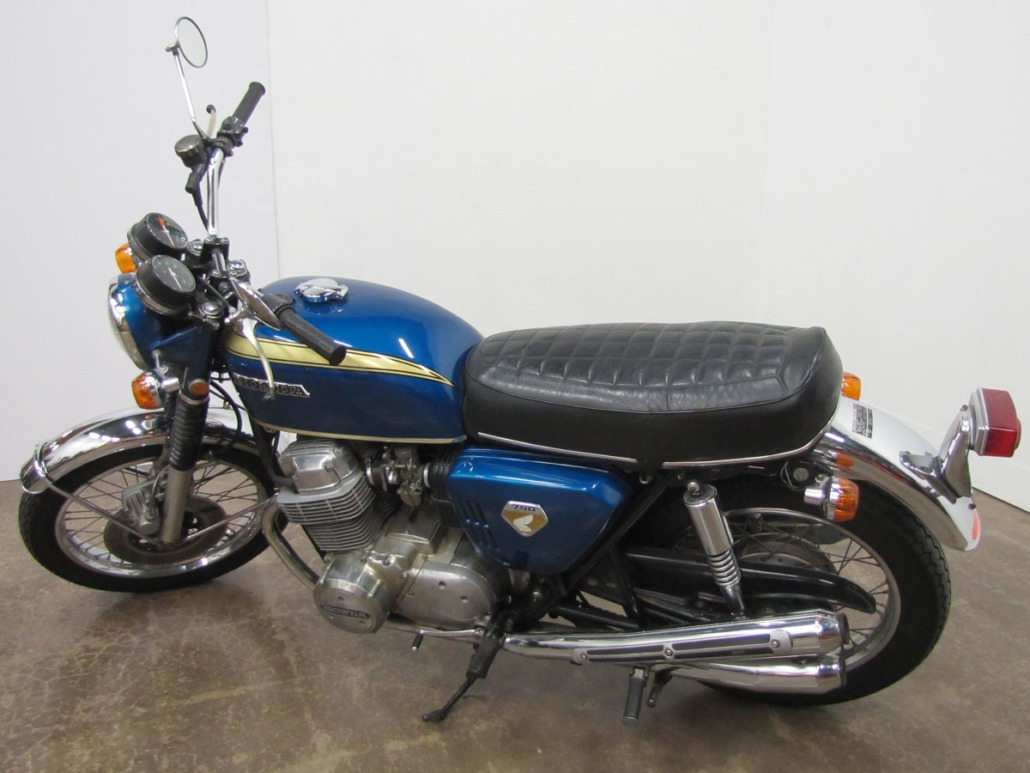 After years of reading motorcycle magazines, seeing the new models from Harley, the Italians, British makers and the Japanese “big four,” 1969 motorcycle magazines brought us all a jolt. We started to see photos of an all-new, four cylinder 750cc class machine from Honda. A quick glimpse showed a disk brake up front and four bold megaphones, Grand Prix style. Closer examination showed four carburetors and large, upright gauges ala Vincent Black Shadow. Additionally, the tires had a very rounded profile, not unlike Dunlop KR road race rubber; very unlike what most bikes were shod with at the time. Truly new and unique in design, did all this promise performance like Honda’s famed GP bikes of five years earlier?

In our somewhat jaded current motorcycling times, this Honda CB750 launch would be no big deal. But during the mid-1960’s nearly all manufacturers had been at work developing bigger, faster bikes with the American market in mind. The 1969 landscape held impressive new machines; the British triples, the Commando Fastback, the recently released Kawasaki H1 Mach III plus the established Harley Sportster. Looking at the spec sheet and seeing the components, this 67 horsepower CB750 was truly revolutionary. And Honda, of course, provided great detail photos to the press showing the engine internals including the long one piece crankshaft with plain bearings and the chain driven overhead camshaft. All this eye candy was in those Cycle and Cycle World magazine stories that drove us to visit local Honda dealers.

At a competitive $1500, these bikes flew out of my local Honda dealer’s showroom and hit the streets. The candy blue, the color of one I test rode, was a bit odd, but the candy red with chrome fenders and those megaphone-shaped mufflers looked great…and sounded great.  Massive performance compared to my Super Hawk. Soon, people riding other fast bikes like tuned Sportsters and Bonnevilles learned the CB750 was something to be reckoned with. Then Honda contracted with Dick Mann to run the Daytona 200 in March 1970, not long after the bike was launched. His bike was equipped with the full complement of Honda-offered “CR” race kit parts which would soon grace the cover of Cycle magazine. Mann won the 200, just barely, with a motor going sour. If Honda did not already have what they needed for a sales success, this big win iced the cake.

The SOHC CB750 was built for ten model years, then the black or silver DOHC CB750F came along in 1979. In these ten years, MV Agusta, Kawasaki, Suzuki and Yamaha all played catchup and ultimately improved on Honda’s great formula, now often referred to as the UJM or Universal Japanese Motorcycle.

In the 1970’s, things were happening fast with big changes coming at us. And this is just speaking of the heavy weight road bike segment. In that time-frame, look at the launch of the Japanese ATV with the Honda US90, the great Yamaha DT-1, and the amazing developments in motocross where long travel suspension hit in the mid-1970’s. And consider what we can own and ride now, like 220 horsepower sport bikes, even a dynamic electric bike from Harley-Davidson!

It’s been 50 years since this magic time. If you have a story about this era, please send us a comment.

This Honda CB750 is a 1970 model. Though a K0 like the launch bike, it was manufactured months later with a few differences including die-cast, instead of sandcast crankcases, cylinder and head. It’s on loan from the Jill and John Parham Collection and part of a very large display of important Japanese motorcycles beginning in the 1950’s. When you visit the National Motorcycle Museum, please check out this fine CB750 along with its contemporaries from many manufacturers.