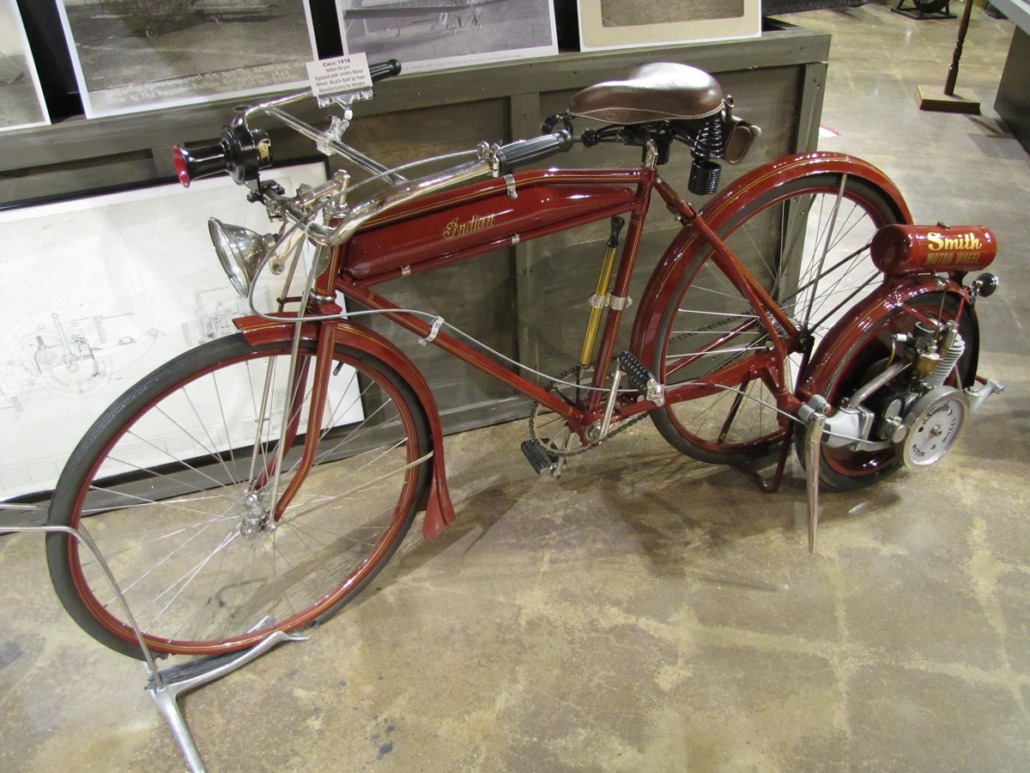 INNOVATION: The Motor Wheel bridged the gap between bicycles and true motorcycles, between pedaling and using motive power. First designed by Englishman Arthur Wall about 1910, it was simple, economical transportation, a first step to bringing bicyclists closer to becoming motorcyclists.

Looking back at their advertising and dealer promotions, plus their range of commercial vehicles, Indian was a powerful marketing company. Originally formed about 1889, they made bicycles until the mid-teens. When they offered this great looking bicycle, manufactured to spec by the Pope Manufacturing Company, their mission was to bring the motorcycle-look to someone they could influence into becoming a motorcycle customer. The tank mimics their fuel tanks of the era, but holds a battery for the headlight. The front fender, similar to late teens Indian motorcycle fenders, gracefully reduces dirt slung up on the rider. The rear stand helps with servicing and gives the bicycle stature when at rest, similar to motorcycle rear stands. Adding a Smith Motor Wheel to a bicycle brings the rider closer to motorcycling.

Text from an ad in The Christian Herald, May 17, 1916:
“The Smith Motor Wheel attaches to any bicycle in five minutes, and the first short spin will foster friendship. Two pedal turns awaken the power and your work is done. The sturdy motor affords any speed from 4 to 20 miles per hour. Up to 125 miles of new pleasure in every gallon of gasoline.”

Formed in Milwaukee in 1874, A.O. Smith was like many successful companies today. Though they supplied parts to auto makers like Cadillac, Ford and Oldsmobile, they also looked around for smaller companies producing good products, bought them out and further developed the product.  Arthur Wall, a young British man, developed an internal combustion-engined direct drive unit that, when attached to most any bicycle as an outrigger third wheel, moved bicycle and rider down the road. A.O. Smith bought manufacturing rights to Wall’s idea, patented it in 1914. After making about 25,000 units, and improving the design for durability, A. O. Smith sold rights to Briggs & Stratton in 1919, another Milwaukee company. B&S enlarged the bore making the engine produce two horsepower. Later they developed a magneto system many of us know from working on old lawnmowers: the flywheel also held magnets that are the spark generating magneto system.

Starting was achieved by pulling a compression release, then pedaling to rotate the engine. Most interesting is that the camshaft had four lobes, was driven at an 8:1 reduction. The drive wheel attached directly to the camshaft. Most camshafts operate at half speed.

It was not long before these Smith Motor Wheels powered sleds, buckboard cars, railroad repair vehicles and more. When you visit the National Motorcycle Museum you can view this machine in person along with a Smith powered sled and other interesting, innovative machines in the new Early American Transportation INNOVATION exhibit.