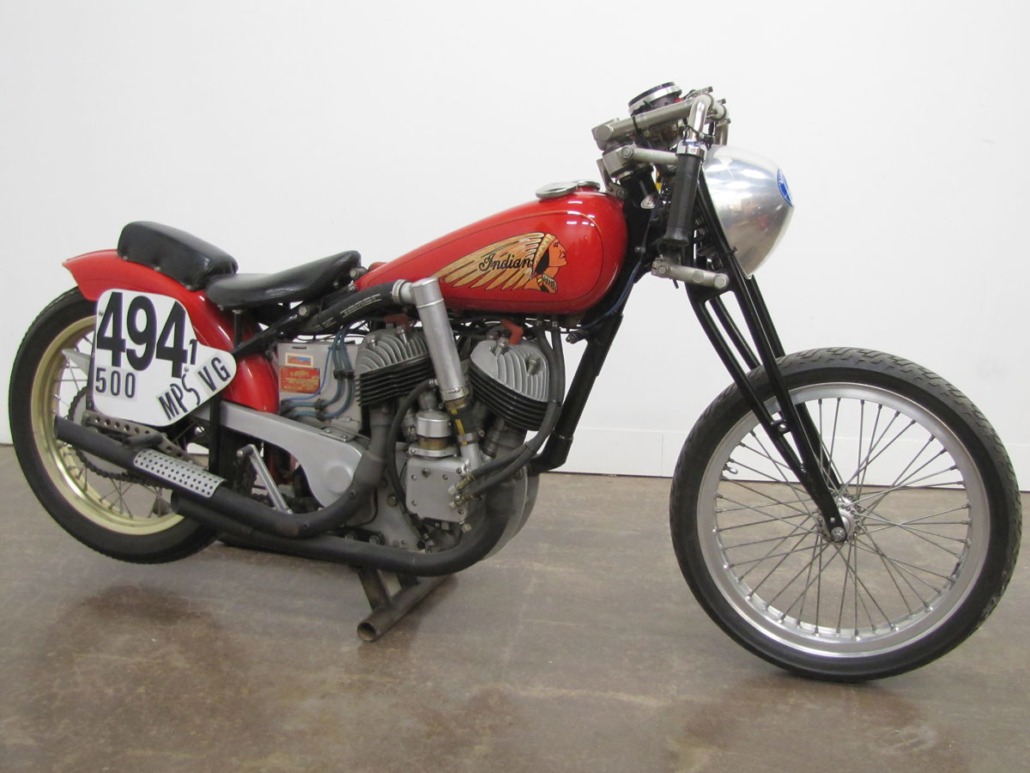 Racing at the Bonneville Salt Flats is often a study in resourcefulness. You pack tools and spares, a broad brim straw hat, everything you anticipate needing out on the salt; it’s a long way back to the shop! But to this team it was a lamp shade that proved an easy bike part to find locally!

A recent temporary exhibit installed at the National Motorcycle Museum was entitled STREAMLINERS. Author and film producer John Stein served as curator, and together we put together a great sampling of older land speed record motorcycles, plus one not so old – a sidecar rig powered by a Suzuki Hyabusa engine. Among the machines on display then, and currently, is an Indian Scout piloted by Rusty Lowry, and it’s our Featured Motorcycle this week.

Having already set a MVG-750 record at Bonneville for 750cc Vintage non-streamlined machines, Rusty Lowry, rider, and Steve Huntzinger, bike builder, went to a local Wendover, Utah hardware store and found a drop lamp to mount on the front of the Indian. This one change would qualify the bike for the partially streamlined class; MPS Modified Partial Streamlining. It worked, and the 750cc flathead of GMA All American Racing set a record of 127.34 mph. While impressive, their success wasn’t altogether surprising. Huntzinger is a world-class restorer and tuner and Lowry is an accomplished motorcycle racer, having won various AHRMA vintage road races at Daytona for ten straight years. The detail on this old Indian is impressive.

A wide range of Land Speed Record machines are on display next to the new Early American Transportation INNOVATION exhibition. When you visit you can see the great Harley-Davidson powered J&P Cycles streamliner, Rick Vesco’s double Yamaha streamliner and several others including the Plymouth Six powered bike called Monster. This Indian Scout is graciously on loan from the Jill & John Parham Collection.

Don’t miss this week’s special video, the story of Salt Ghost, a great old Triumph salt flats racer. This DVD shows you what it’s like to try and set a new record at Bonneville.